Japan was schooled by the world's best on Tuesday, suffering a 3-0 drubbing by Brazil in the men's volleyball quarterfinals.

Having snuck into the knockout round thanks to a final group stage win over Iran, Japan was outclassed 25-20, 25-22, 25-20 at Ariake Arena by the reigning Olympic, World Cup and Nations League championship team. 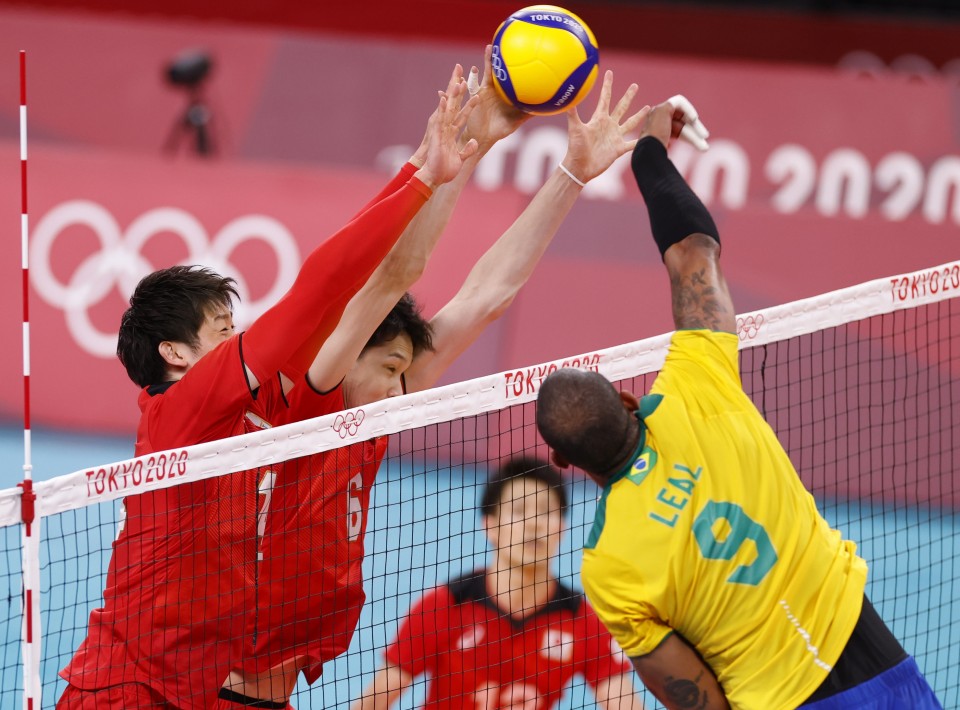 Japan's Yuki Ishikawa (L) and Akihiro Yamauchi (2nd from L) attempt to block a ball spiked by Brazil's Yoandy Leal Hidalgo in the second set of a men's volleyball quarterfinal at the Tokyo Olympics on Aug. 3, 2021, at Ariake Arena. (Kyodo) ==Kyodo

Yuki Ishikawa and Yuji Nishida continued their strong tournaments by tallying 17 and 13 points, respectively, but got next to no help from their teammates.

"We got this far with good performances so the result is disappointing," said Ishikawa.

"We are still left wanting when it comes down to execution on each play."

The bruising Brazilian frontline trio of Yoandy Leal Hidalgo, Wallace De Souza and Ricardo Lucarelli Souza blasted their way to 41 combined points. De Souza was a blocking force while Leal Hidalgo was the most effective spiker.

Japan was not embarrassed by the towering Brazilians, but also never threatened, as the men in yellow established small leads in each set that they were able to protect.

Japan's men, playing their first Olympic tournament since 2008, finished third in their group with three wins and two losses to reach the quarterfinals for the first time since 1992.

Brazil will play the Russian Olympic Committee in the semifinals. The two teams played in the group stage, with the Russians winning 3-0.