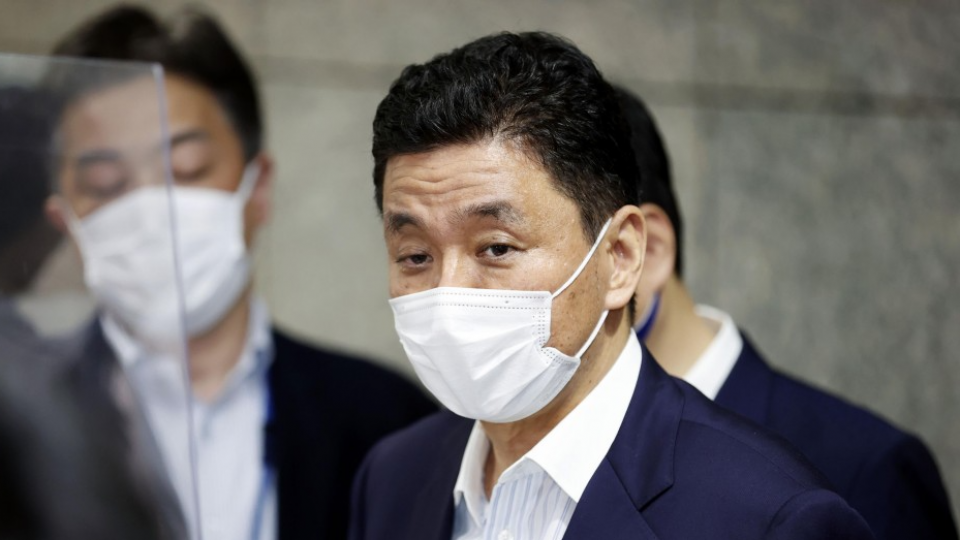 Japanese Defense Minister Nobuo Kishi meets the press at his ministry in Tokyo on Aug. 23, 2021. Three Self-Defense Forces planes are set to be dispatched to Afghanistan to evacuate Japanese nationals and local staff who have worked for the Japanese Embassy and other Japanese organizations amid the worsening security situation in the country. (Kyodo) ==Kyodo

Japan to send SDF planes to Afghanistan for evacuations

TOKYO - Japan will dispatch three Self-Defense Forces planes to Afghanistan to evacuate Japanese nationals and local staff working for the Japanese Embassy there and other organizations amid the political crisis after the Taliban militant took a grip on the country, the top government spokesman said Monday.

Up to several hundred people will be evacuated in the mission, a diplomatic source said. It will be the first time the SDF has evacuated foreign nationals from a country, according to the Defense Ministry.

TOKYO - Japan's health ministry and the Tokyo metropolitan government decided Monday to ask hospitals in the capital to secure beds and accept as many COVID-19 patients as possible, as a recent resurgence of infections outstrips the city's medical system.

To further relieve strain on hospitals in Tokyo, the metropolitan government started operating the same day a facility to provide oxygen support to COVID-19 patients with relatively mild symptoms.

SEOUL - The top nuclear envoys of South Korea and the United States pledged Monday to work toward an early resumption of dialogue with North Korea amid tensions with Pyongyang over ongoing military exercises between the allies.

TOKYO - Japan will oblige business operators to reduce the provision of 12 disposable plastic items such as spoons and straws from next April to promote recycling and tackle marine pollution, the government said Monday.

The move is based on legislation that was enacted in June to cut down on plastic waste at restaurants and retail stores. Business operators can choose from among measures including charging for the items and switching to recyclable products.

TOKYO - The Tokyo Paralympics' opening ceremony will include the flag of Afghanistan as a "sign of solidarity" since athletes from the country will not be able to compete against their wishes, a top official said Monday.

International Paralympic Committee chief Andrew Parsons told a press conference that "it's important to highlight" that having the flag at the ceremony on Tuesday night will also be a message of "peace" to the rest of the world, given that Afghan athletes are unable to compete after the Taliban seized control of the country.

SINGAPORE - U.S. Vice President Kamala Harris on Monday reaffirmed the commitment of the United States to the Indo-Pacific region in talks with Singaporean Prime Minister Lee Hsien Loong on the second day of her Asia trip.

"Today we are in Singapore to stress and reaffirm our enduring relationship to this country and this region and to reinforce a shared vision of a free and open Indo-Pacific region," Harris said in a joint press conference with Lee after their meeting.

TAIPEI - Taiwan President Tsai Ing-wen received a locally developed coronavirus vaccine at a hospital in Taipei on Monday as the self-governed island began rolling out the Medigen vaccine the same day.

By becoming the first to receive the jab, Tsai hopes to demonstrate that the new vaccine, developed by local vaccine maker Medigen Vaccine Biologics Corp., is effective and safe, in a bid to improve inoculation rates.

CARNOUSTIE, Scotland - Sweden's Anna Nordqvist held on to claim her third major title at the Women's British Open golf championship on Sunday, while Japan's Ayaka Furue slipped down the leaderboard to finish in a tie for 20th.

Nordqvist, winner of the 2009 LPGA Championship and the 2017 Evian Championship, carded a final round 69 at Carnoustie Golf Links to finish on 12-under par, one shot clear of England's Georgia Hall, Sweden's Madelene Sagstrom and American Lizette Salas.