For many Japanese, an air of unreality hung over the Tokyo Olympics, held under the shadow of a once-in-a-century global pandemic.

With no overseas fans and even domestic spectators banned from almost all events, many felt physically disconnected from what they could only follow on TV or online. 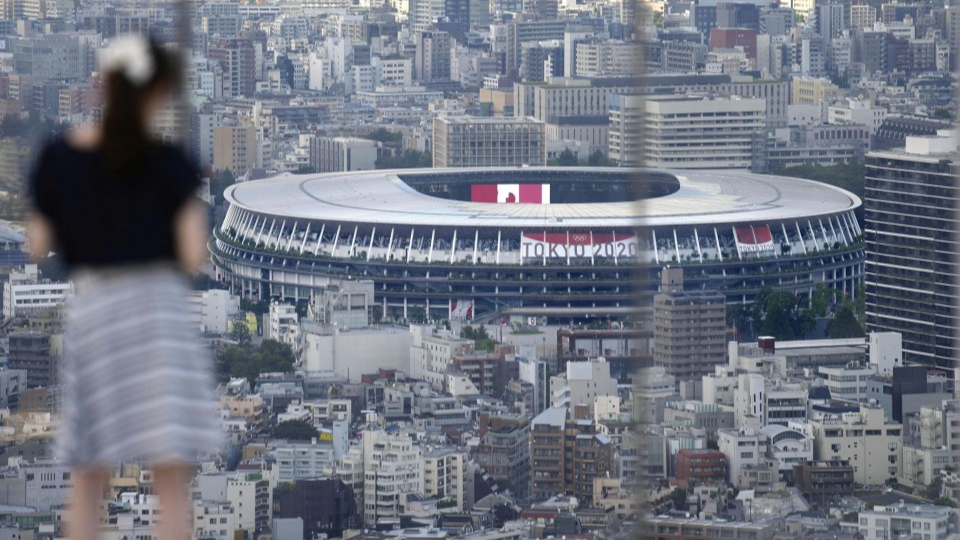 Photo taken on Aug. 6, 2021, of the National Stadium, the main venue of the Tokyo Olympics, from Shibuya Sky, an observatory facility in the capital. (Kyodo)

Local enthusiasm did build to some extent despite widespread hostility to the games before they started, with Japan's Olympians putting in strong performances and expressing just what participating in the global sporting showpiece had meant to them.

But the buildup of distrust toward the Japanese government and the International Olympic Committee for going ahead with the games despite fears over how they could impact Tokyo's battle against surging coronavirus infections is set to remain a negative legacy of the event for all concerned, some pundits said.

While the Olympics may not have been "proof that humanity has defeated the virus" as Prime Minister Yoshihide Suga and his predecessor Shinzo Abe once optimistically insisted, the government and other organizers consistently touted them as "safe and secure."

A "bubble system" keeping athletes and Olympic-affiliated workers at a distance from the general public was introduced, and, as the organizers stressed, the rate of coronavirus infections among those who came to Tokyo for the 17-day games that wrapped up Sunday was very low.

Nevertheless, even if there is no proven direct link, medical experts say the event may have played an indirect role in the alarmingly fast rise in new coronavirus cases to daily records that continued as the games took place.

The games may have lowered the public's guard by creating a celebratory atmosphere in which people were more likely to go outdoors and meet people, they said.

"For many Japanese, the Olympics were a parallel world...away from the hard reality of the coronavirus," said Kiyoshi Abe, a sociology professor at Kwansei Gakuin University, referring to a concept often used by IOC officials to explain how participants at the games would be isolated from the public to ensure safety.

Outside the "parallel world," there were no fans screaming for their countries or visitors from around the world mixing with locals. Cultural programs and other non-sport exchanges and festivities such as fan zones and live sites that usually power the excitement of the games were also sidelined or absent.

"The Japanese people probably could not have accepted the games or enjoyed them with peace of mind if they were held as a continuation of the world they live in," Abe said.

But the sealing of the games also left many residents in Tokyo struggling to feel that the spectacle had really taken place in the capital, and unsure of what to make of what had been almost a completely virtual experience.

Kazuya Ueda, 26, for instance, admitted to "watching the competitions excitedly on TV" but wondered whether in letting his excitement build he had "fallen into the organizers' trap," noting that he had been puzzled why the Olympics could go ahead while many large-scale events in Japan were being cancelled due to the coronavirus. 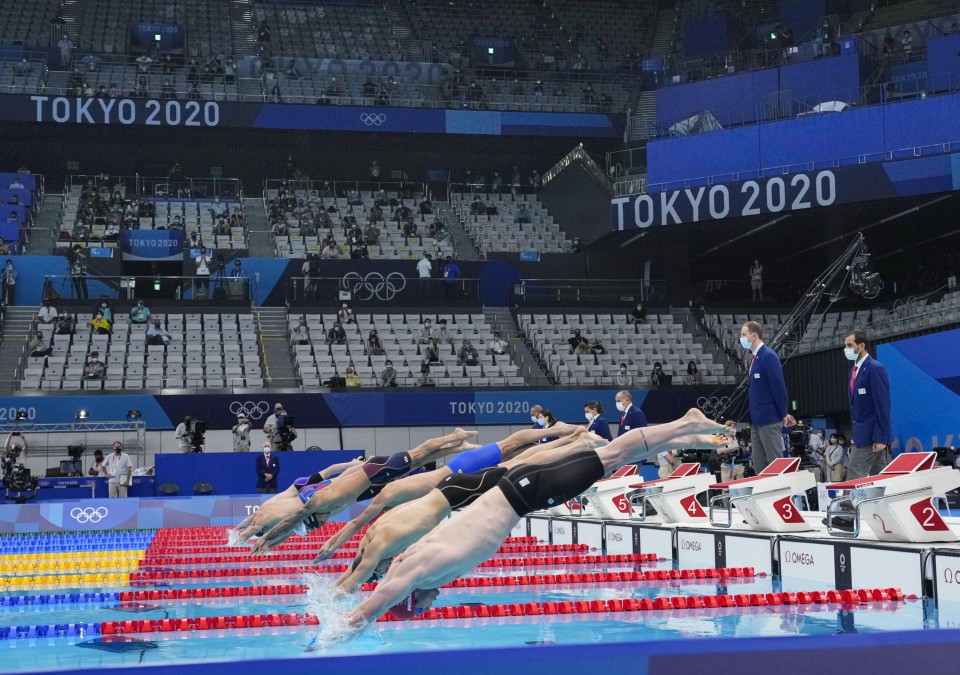 Photo taken July 31, 2021, shows Tokyo Aquatics Centre during the Tokyo Olympics. The games are being held without spectators from the general public at almost all venues amid the coronavirus pandemic. (Kyodo) ==Kyodo

A 48-year-old man who was near Tokyo Station's Olympic countdown clock -- now showing the current time -- said, "If there were no coronavirus, I myself and also the country would have been more excited."

"Without spectators, the economic benefit that had been anticipated has disappeared and I think it will take more time to conclude whether it was the right decision to hold the Olympics," he said.

The initial opposition to the Olympics was fueled by the belief that they had been forced through by Suga's government. Suga, it was thought, saw a chance to raise his support levels by boasting that the country had overcome the challenge of the pandemic to successfully host the event. A large medal haul for Japan would enhance his government's standing even further.

After deciding to ban overseas spectators in March, Suga had insisted on holding the Olympics with domestic spectators until just two weeks before the opening of the games on July 23.

That attempt was made despite repeated warnings by infectious disease experts, inviting criticism that he was treating the number of rising COVID-19 cases as insignificant and prioritizing the games over health.

In a Kyodo News poll held on the last weekend before the games began, 87 percent expressed some degree of concern about Tokyo hosting the Olympics amid the pandemic and 31 percent said they should be canceled.

Suga's optimistic view that the Olympics would be well received once they started has somewhat been supported by the lift in sentiment due to Japanese athletes' medal rush, but surging COVID-19 infections with more and more people ignoring the government's call to stay home seem likely to limit any boost to Suga's standing.

Tomoaki Iwai, a political expert at Nihon University, said the scenario that holding the Tokyo Olympics would create momentum for Suga going into a House of Representatives election that must be called by this fall "has been written off" by the resurgence of the virus.

Iwai argued that any positives from the Olympics such as medal haul do not matter in the final reckoning. "The Cabinet support rating is eventually linked with the number of infections," he said.

Other political analysts said Suga's insistence on the Olympics going ahead was also motivated by the fact that China will host the Winter Games in 2022. He was afraid that with the pandemic possibly in retreat then, China would use the opportunity to press its claims to be a global leader in overcoming the health crisis, they said.

Reflecting the complex perceptions surrounding the games, two of the top-tier sponsors -- Toyota Motor Corp. and Panasonic Corp. -- took a step back from what is usually considered a golden opportunity to promote brand image and products.

The presidents of the two firms as well as the leaders of the country's three major business organizations skipped attending the opening ceremony, apparently to avoid reputational damage to their companies by being seen as tied to the Olympic brand. Toyota decided not to air TV commercials related to the games in Japan.

Also falling by the wayside were plans to show the world how far Japan's northeast had recovered over a decade after a massive earthquake and tsunami and subsequent nuclear disaster had devastated the region.

The government initially promoted the games the "Recovery Olympics" and the nationwide torch relay, which was ultimately mostly taken off public roads, started from the northeastern prefecture of Fukushima.

But the slogan faded into the background with no spectators allowed at a venue in Fukushima and many exchange events canceled, leaving a few volunteers exploring ways to pass down their experiences to limited media members and other visitors.

For volunteers overall, who have become the face of the Olympics in recent editions, the games offered far fewer opportunities with the ban on overseas and domestic spectators.

Around 10,000 volunteers pulled out from the initial 80,000 who had registered due to COVID-19 fears and scheduling conflicts following the postponement.

Activities that usually ripple out from an Olympics also dried up, with an aim to show children world-class sports performance shelved because of the pandemic and only a small number of municipalities able to go ahead with their plans to host pre-Olympic training camps.

Even when such camps were held, initial plans to foster exchanges between the locals and athletes had to be scaled back.

"There has never been an Olympics that turned its back on the public like this Tokyo Olympics. If you look at the process leading up to the games, the government's mindset that it can be pushed through has created a chain of negative legacies," said Yuji Nakamura, a professor of public administration at Utsunomiya University.

"For now, people may bask in the heroic performances of the athletes but with the games ending, there could be backlash toward the administration for going ahead with the Olympics and aggravating the coronavirus situation," he said.