Mone Inami's participation in the women's golf competition at the Tokyo Olympics was something few could have predicted at the start of the year when she sat 63rd in the world rankings.

But the 22-year-old pulled off an even bigger surprise Saturday, winning Japan's first Olympic golf medal after emerging victorious from a playoff against New Zealand's former world No. 1 Lydia Ko to capture the silver. 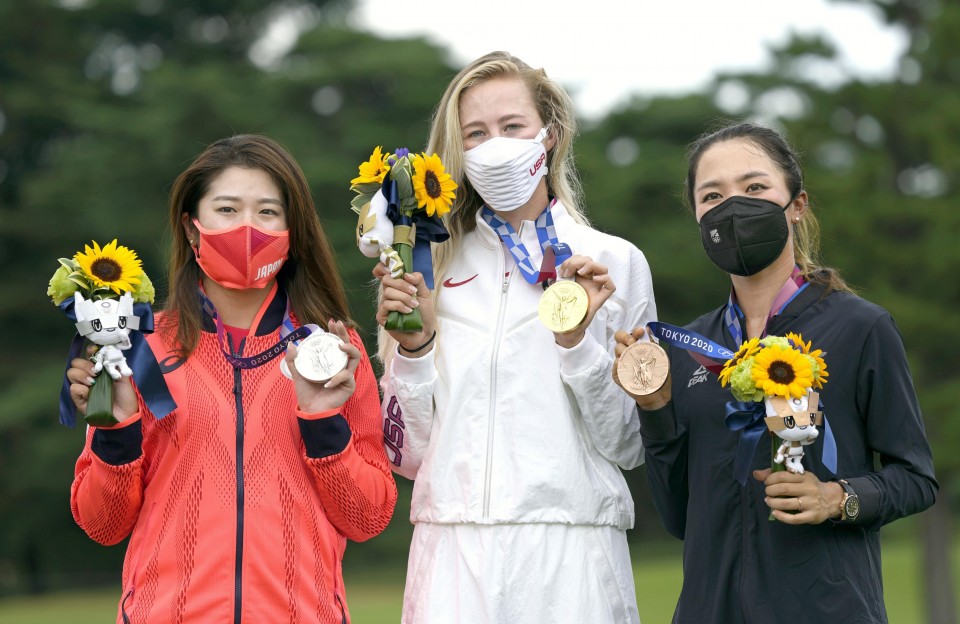 (From L) Silver medalist Mone Inami of Japan, gold medalist Nelly Korda of the United States and bronze medalist Lydia Ko of New Zealand pose with their medals for the women's golf at the Tokyo Olympics on Aug. 7, 2021, at Kasumigaseki Country Club in Kawagoe, Saitama Prefecture, near Tokyo. (Kyodo) ==Kyodo

Both players shot 6-under 65s and were tied for second on 16-under after 72 holes at Kasumigaseki Country Club, northwest of Tokyo, one shot behind winner Nelly Korda of the United States.

Inami said she was happy to have maintained her 100 percent record in playoffs, shrugging off a wayward approach shot that landed in a deep greenside bunker on the 18th hole.

After just managing to exit the bunker, she missed her par putt and fell out of a share of the lead that may have put her in a playoff for gold, depending on how Korda finished the hole.

"I knew it was in the deep bunker, it was a little disappointing. I regret not making a full swing (on the approach shot)," said Inami.

"I have been winning 100 percent of my playoffs and I wanted to maintain that record."

Five wins this season on the Japanese LPGA tour secured Inami, who had only previously won two domestic titles, a berth at her home games, although she has admitted she had luck on her side with the one-year postponement giving her more time to qualify.

Starting the sport in her fourth year of elementary school, Inami is a model student of the game.

She practiced putting and fine-tuned her swing with a driver before school from 4 a.m. When she got home, it was straight back to her clubs and she was only satisfied after her 10th hour of practice a day.

Her father Ryo was adamant his daughter was practicing and playing for the love of the game, "not after being told to."

The Tokyo native passed her professional test in the summer of 2018 along with 2019 British Open winner Hinako Shibuno.

Inami, described by coach Tomoaki Okushima as someone who hates to lose and thrives on adversity, kept her down-to-earth attitude after turning pro.

"There are loads of players above me in the rankings. I can't waste a single second to close the gap," she said.

"I have my favorite player but not one I'm aspiring to be. Because if you make one your idol, you can only be as good as she is."