At least 70 dead, 140 injured in blasts near Kabul airport: media

At least 70 people were killed and around 140 injured in two explosions that occurred Thursday outside the airport of Afghanistan's capital Kabul, U.S. media reported, as many countries strive to evacuate their citizens following the Taliban's recent seizure of power in the war-torn country.

The Pentagon said a total of 13 U.S. military service members died and 18 were injured. The Islamic State claimed responsibility for the deadly attacks through its affiliate news website.

The blasts, believed to be suicide bombings by an Islamic State group affiliate called ISIS-K, took place just days ahead of the Aug. 31 deadline for the withdrawal of U.S. forces from Afghanistan as chaotic evacuation operations continue at the airport. 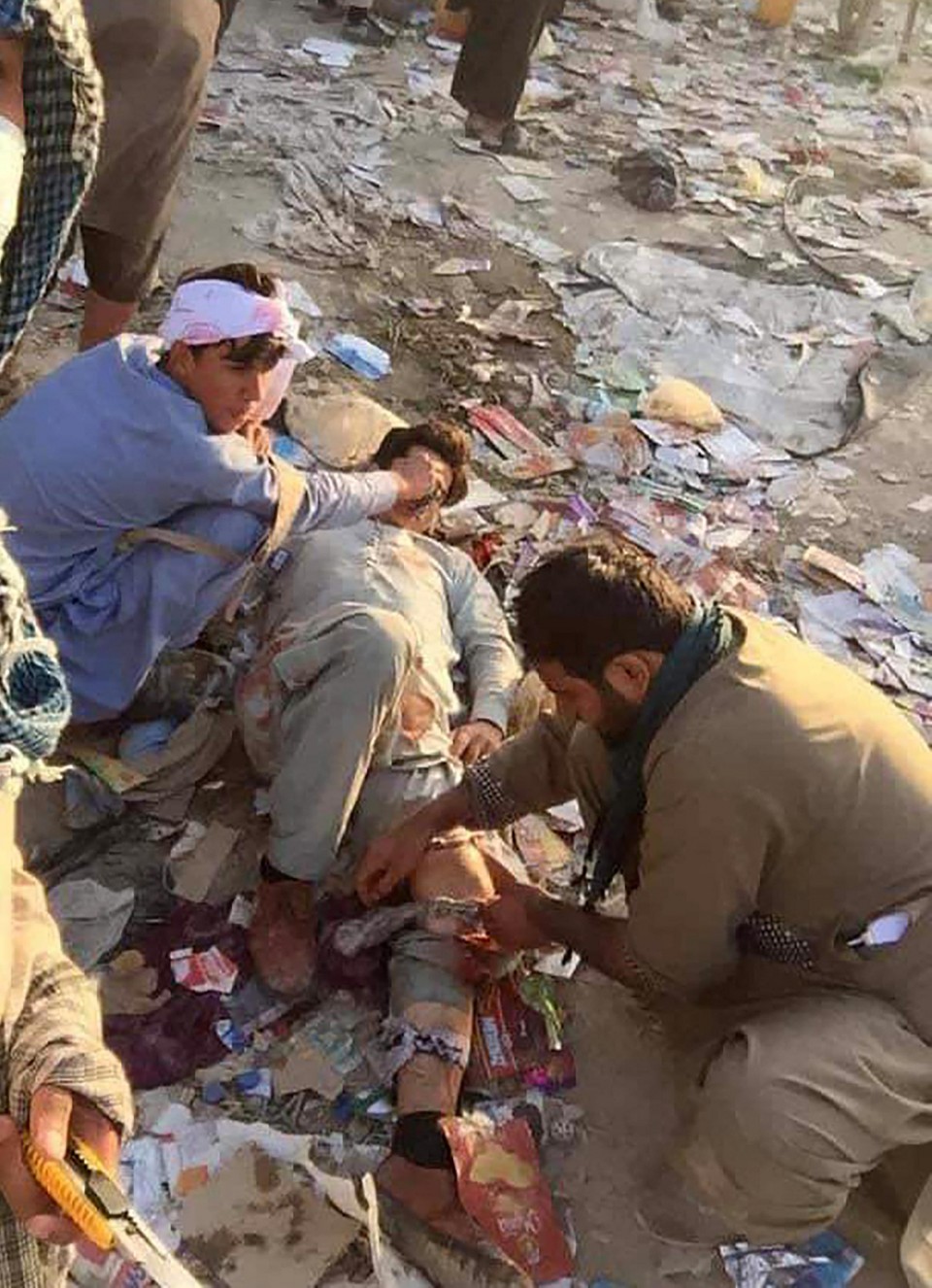 A wounded man is cared for after deadly explosions went off near the airport in Kabul, Afghanistan, on Aug. 26, 2021. (UPI/Kyodo)

U.S. President Joe Biden pledged to hold those responsible for the attacks accountable, saying, "We will not forgive, we will not forget, we will hunt you down and make you pay."

In a press conference at the White House, Biden also stressed that the United States will not be deterred by terrorists, saying, "America will not be intimidated."

Biden said he has ordered military commanders to develop plans to strike ISIS-K assets, leadership and facilities in retaliation.

"We will respond with force and precision at our time, at the place we choose, and the moment of our choosing," he said.

White House Press Secretary Jen Psaki said the administration's deadline to complete the U.S. troop withdrawal by the end of the month has not changed, while stressing that there is "no end" to the timeline for evacuating American citizens and Afghans who worked alongside the United States during the war.

Defense Secretary Lloyd Austin also mourned the military losses in a statement, saying "Terrorists took their lives at the very moment these troops were trying to save the lives of others."

Following the blasts, the White House announced that a meeting between Biden and Israeli Prime Minister Naftali Bennett has been postponed to Friday from Thursday. Biden was briefed on the attacks in Kabul earlier in the day.

Western nations had warned of a possible attack on the airport by Afghanistan's Islamic State group affiliate in the final days of the massive evacuation operation.

The international airport in Kabul has been flooded by people seeking to escape from the Taliban, an Islamist group that returned to power earlier this month after being ousted by U.S.-led forces in 2001.

The U.S. Embassy in Kabul on Wednesday urged American nationals not to approach the airport, citing security concerns.

Foreign governments including Japan are rushing to airlift citizens out of the country, with Western media reporting that some European countries and Canada are completing evacuation operations or planning to do so before the Aug. 31 deadline amid deteriorating security near the airport.

Japan's Self-Defense Forces have sent three aircraft with the aim of completing the evacuation of Japanese and local staff working at the Japanese embassy and other organizations by the end of the day on Friday.

The Taliban, which controlled Afghanistan from 1996 to 2001, has promised to uphold women's rights "within the framework of Islam," although concerns persist that liberties will be significantly eroded under their strict implementation of shariah law.

The United States began the war in Afghanistan in response to the terror attacks of Sept. 11, 2001 by the al-Qaida organization, which was being harbored by the Taliban.

In April this year, Biden announced that he would withdraw all the U.S. troops in Afghanistan by the upcoming 20th anniversary of the terror attacks, saying it was "time to end America's longest war." In July, the deadline was moved up to Aug. 31.

But as the Taliban seized city after city before taking control of Kabul on Aug. 15, Afghanistan's security forces collapsed in a matter of days and President Ashraf Ghani fled the country.