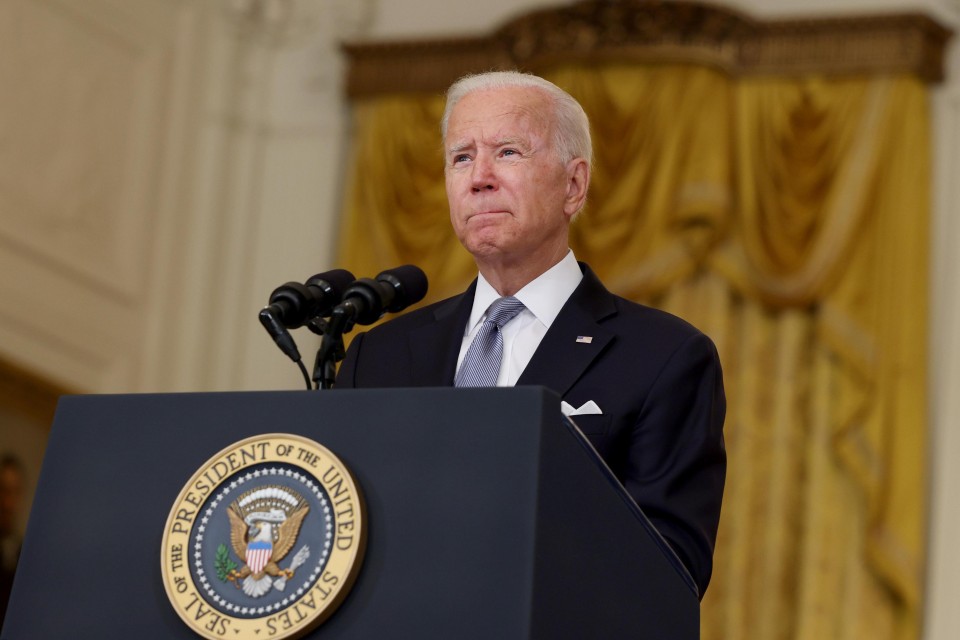 U.S. President Joe Biden pauses while giving remarks on the situation in Afghanistan from the East Room of the White House in Washington on Aug. 16, 2021. (Getty/Kyodo)

The U.S. intelligence community has failed to determine the most likely origin of the novel coronavirus after further investigations, saying Friday it remains divided on whether the virus emerged from human contact with an infected animal or from a laboratory incident.

While denying the possibility that the virus was developed as a biological weapon, the Office of the Director of National Intelligence said in a report, "All agencies assess that two hypotheses are plausible: natural exposure to an infected animal and a laboratory-associated incident."

The intelligence community "judges they will be unable to provide a more definitive explanation" without new information, such as whether a laboratory in the central Chinese city of Wuhan, where the pandemic was first detected in late 2019, was handling the virus or a close progenitor virus before COVID-19 emerged, the office said.

U.S. President Joe Biden, who asked the intelligence community in May to "redouble" its efforts to investigate the origins of the virus, vowed to continue working with like-minded partners to press China to fully share information on the emergence of the pandemic that has killed more than 4.4 million people around the world.

"Critical information about the origins of this pandemic exists in the People's Republic of China, yet from the beginning, government officials in China have worked to prevent international investigators and members of the global public health community from accessing it," Biden said.

"While this review has concluded, our efforts to understand the origins of this pandemic will not rest. We will do everything we can to trace the roots of this outbreak that has caused so much pain and death around the world, so that we can take every necessary precaution to prevent it from happening again," he said.

China expressed strong opposition to the report, with its embassy in Washington saying the U.S. probe "wrongly claims" that Beijing "continues to hinder the global investigation, resist sharing information and blame other countries".

"A report fabricated by the U.S. intelligence community is not scientifically credible. The origin-tracing is a matter of science; it should and can only be left to scientists, not intelligence experts," the embassy said in a statement.

According to the unclassified summary of the assessment, the virus probably emerged and infected humans through an initial small-scale exposure that occurred no later than November 2019, with the first known cluster of COVID-19 cases arising in Wuhan in December 2019.

The report, meanwhile, said four intelligence community elements and the National Intelligence Council judged with "low confidence" that the initial infection was most likely caused by natural exposure to an animal infected with the virus or a close progenitor virus.

One intelligence community segment assessed with "moderate confidence" that the first human infection with the virus was most likely the result of a laboratory-linked incident, probably involving experimentation, animal handling, or sampling by the Wuhan Institute of Virology, according to the report.

At three intelligence community elements, some analysts favored the natural origin theory, others leaned toward the laboratory origin scenario, and some saw the hypotheses as equally likely, it said.

The summary also assessed that China's officials "did not have foreknowledge of the virus before the initial outbreak of COVID-19 emerged."

The previous U.S. administration under Donald Trump had pushed a theory that the Wuhan Institute of Virology might have been the birthplace of the virus, claiming some researchers there developed symptoms consistent with COVID-19 in the fall of 2019.

The idea that the virus may have accidentally leaked from the laboratory has also drawn attention under the Biden administration.