Taliban fighters reached Afghanistan's isolated capital Kabul on Sunday, offering a "peaceful transfer of power" even as the United States evacuated its embassy by helicopter.

A senior Interior Ministry official told Reuters the Taliban were coming in "from all sides," while Afghan officials told the Associated Press that the insurgents were in some city districts. 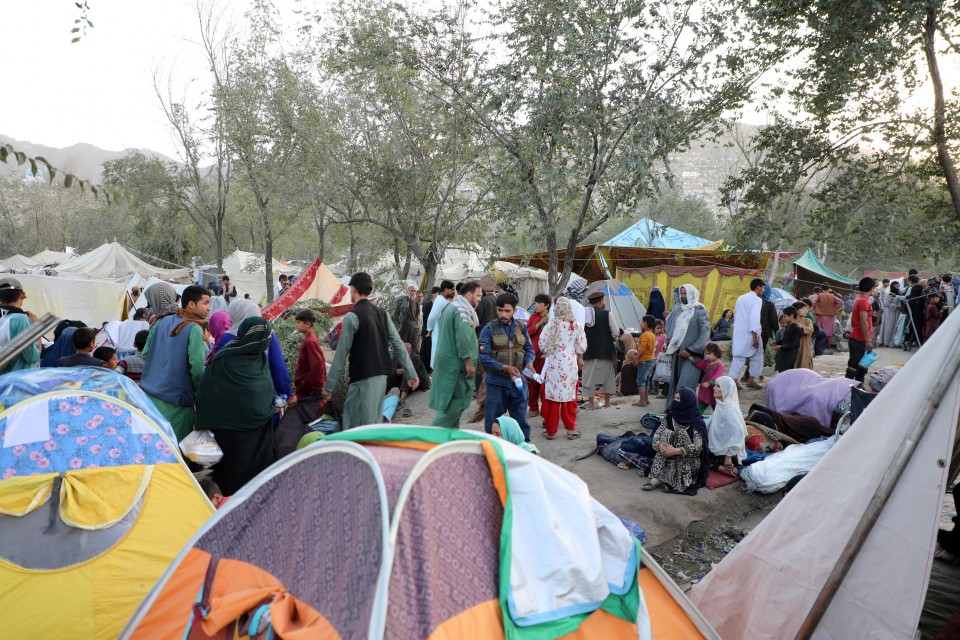 Thousands of families flee from Taliban's offensive and come to Kabul, Afghanistan on Aug. 10, 2021. (Anadolu Agency/Getty/Kyodo)

Taliban spokesman Suhail Shaheen told the BBC, "Our leadership have instructed our forces to remain at the gate of Kabul -- not to enter the city. We are awaiting a peaceful transfer of power."

He also said all Afghans would have participation in the Islamic government -- meaning Afghans who are not Taliban would also be included, the BBC reported.

A Taliban press release said "talks are in progress with the rival side to enter Kabul city peacefully and complete the process of transition of power satisfactorily," according to the Afghan Islamic Press.

It said all those working in the military and government are to be dealt with in the spirit of forgiveness, not revenge, and that "no one would suffer damage of lives, properties and dignity" -- though it added that nobody should leave the country.

Sources told the news agency said the two sides had held successful talks and that former interior minister Ali Ahmad Jalali would be appointed as head of an interim government.

Local TV station Tolo News said that former President Hamid Karzai had met with Abdullah Abdullah, head of the High Council for National Reconciliation, and discussed sending an authoritative delegation to Qatar for negotiations with the Taliban.

As panicked workers fled government offices and helicopters landed and took off from the U.S. Embassy, Kabul residents rushed to withdraw cash from banks, and food hoarding was occurring.

The latest developments follow the collapse earlier Sunday of Jalalabad, the last major city outside of Kabul held by the central government.

Since last week, the Taliban have swept across areas of the country formerly controlled by government forces in a stunning blitz, taking such major cities as Kandahar, Herat and Lashkar Gah, mostly without a struggle.

The northern city of Mazar-i-Sharif, which was once the base for resistance to the Taliban when it was previously in power from 1996 to 2001, was captured on Saturday.

The Taliban's resurgence came after the administration of U.S. President Joe Biden took steps to withdraw U.S. military forces and bring an end to what he called "the longest war in U.S. history."

In a statement Friday, Biden said the United States had sent its best soldiers to Afghanistan, invested nearly $1 trillion, trained over 300,000 Afghan soldiers and police, equipped them with state-of-the-art military equipment and maintained their air force.

"One more year, or five more years, of U.S. military presence would not have made a difference if the Afghan military cannot or will not hold its own country. And an endless American presence in the middle of another country's civil conflict was not acceptable to me," he said.

The Pentagon has deployed about 5,000 troops to ensure the safety of U.S. and other allied personnel, and to facilitate the evacuation of Afghans at special risk from the Taliban.