The Japanese government policy to only allow COVID-19 patients with severe symptoms to be hospitalized to prevent a hospital bed shortage drew criticism from both ruling and opposition lawmakers Wednesday, amid concerns patients whose conditions suddenly deteriorate could be left unattended.

In response to a rapid surge in coronavirus infections, Prime Minister Yoshihide Suga decided Monday that only patients with severe cases of COVID-19, or at risk of developing severe symptoms, can be admitted to hospitals in areas facing a virus resurgence.

It marked a policy U-turn as the government had said that all patients except for those with mild coughing symptoms should be hospitalized in principle. 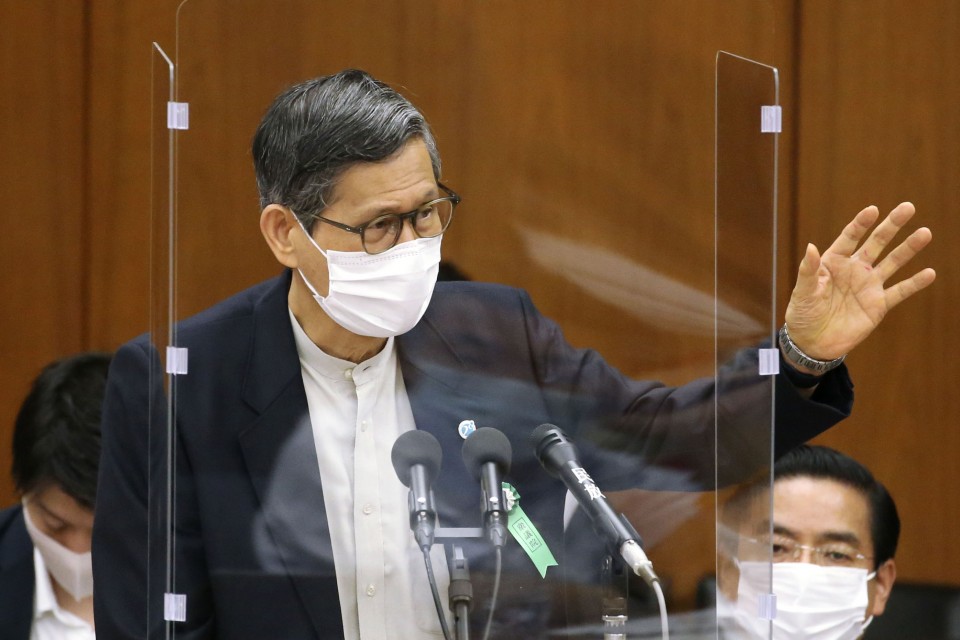 Shigeru Omi, the government's top COVID-19 adviser, speaks at a health committee meeting of the House of Representatives on Aug. 4, 2021. (Kyodo)

Suga said, however, he will not retract the decision, telling reporters, "It is a measure to make medical care available" for those who urgently need it.

Limiting hospital treatment for only the most seriously ill is meant to address situations in Tokyo and surrounding areas experiencing a rapid resurgence and "does not uniformly apply to the entire country," Suga said.

On Wednesday, the daily tally of COVID-19 infections nationwide reached a record 14,207 cases.

Michiyo Takagi, a deputy policy chief of the Komeito party, the junior coalition partner of the LDP, criticized the new policy at parliament on Wednesday, saying, "I want the government to reconsider it, including the possibility of withdrawal."

Diet affairs chiefs of the CDPJ, the Japanese Communist Party, and the Democratic Party for the People agreed to request the policy's withdrawal.

Health minister Norihisa Tamura explained that the move was to ensure there are enough beds for those at risk of dying, reassuring that those at home whose conditions suddenly deteriorate that they can be hospitalized.

On Tuesday, the health ministry officially notified local governments of the change in the hospitalization policy, requesting they consider applying the new rule based on the COVID-19 situation in their areas. The ministry did not indicate the criteria for determining the risk of a patient becoming seriously ill.

Following Suga's policy shift, even COVID-19 patients with breathing problems or pneumonia could now be asked to recuperate at home. "It is impossible to treat moderately ill patients who need ventilators at home," said Takagi.