The daughter of the pioneering German-born British neurosurgeon who is considered the "father" of the Paralympics hopes the world's largest sporting event for people with disabilities being held in Tokyo amid the coronavirus pandemic will remain a source of "inspiration and hope."

In an online interview with Kyodo News, Eva Loeffler, who was mayor of the athletes' village during the 2012 Paralympics in London, said she believes the extensive coverage they received had a transformative effect on public attitudes in the host country toward those with disabilities. 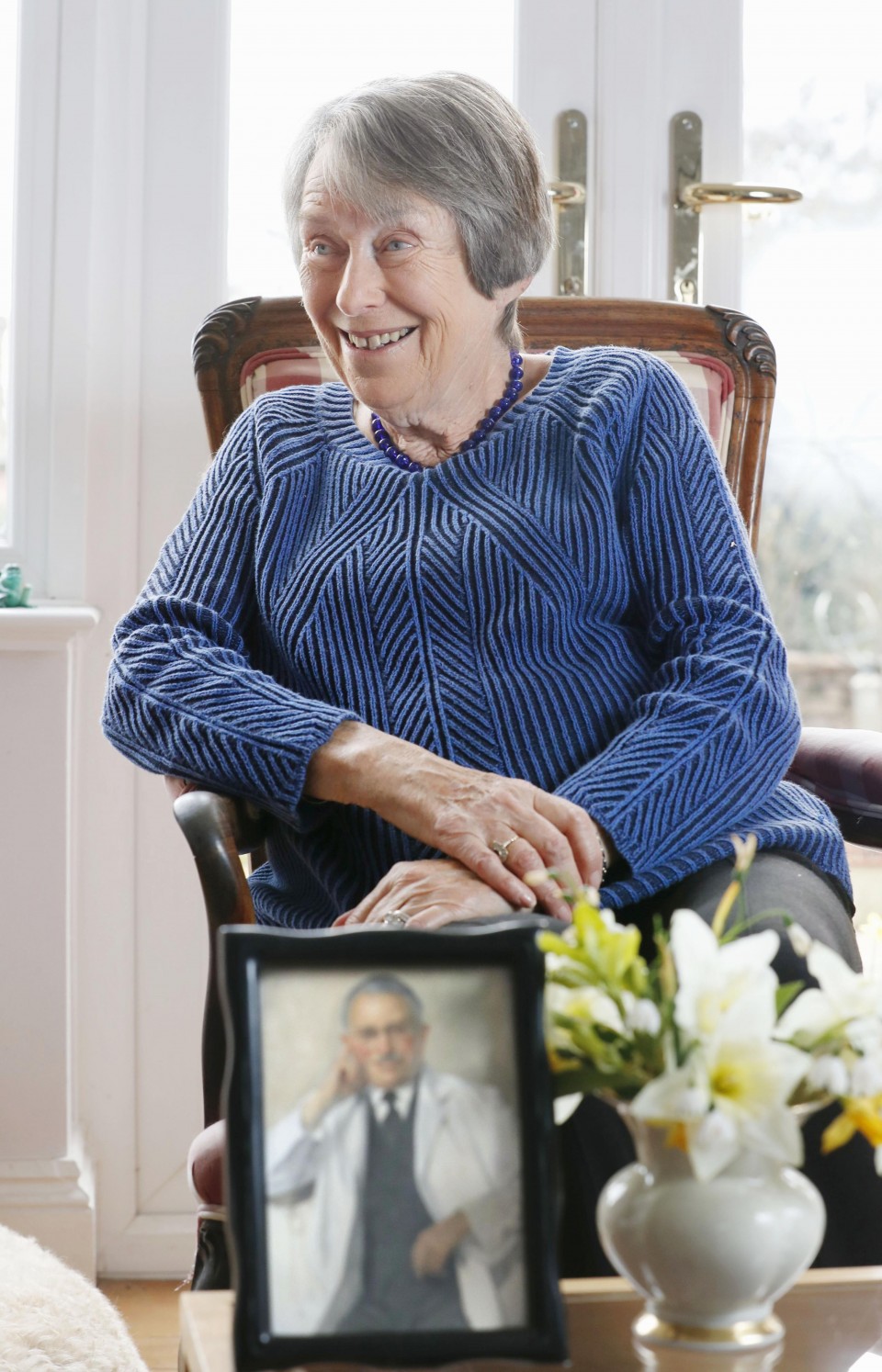 Eva Loeffler reminisces in front of a portrait of her father Ludwig Guttmann, the "father" of the Paralympics, at her home in Suffolk, Britain, in March 2019. (Kyodo)

"It made a lot of people feel differently about people with disabilities, because the whole thing looked so normal. And you weren't looking at the disability, you were looking at athletes," said Loeffler, 88, whose father Ludwig Guttmann founded the precursor to the Paralympics in 1948 nine years after fleeing Nazi Germany for Britain.

Loeffler, however, said that despite this attitude shift, there is still work to be done to improve the lives of disabled people in other areas of society.

Speaking earlier this month ahead of Tuesday's opening of the games, she said she was "amazed" that the Olympics and Paralympics, delayed for one year due to the coronavirus pandemic, were able to go ahead this summer as Japan continues to battle the virus. But she said a cancellation would have been "heartbreaking" for athletes.

Guttmann was known for pioneering a revolutionary approach to treating paralyzed patients, including incorporating sports as a method of physical and social rehabilitation, at the Stoke Mandeville Hospital in Buckinghamshire in southern England.

Becoming a British citizen in 1945, he organized the first Stoke Mandeville Games for disabled war veterans three years later, laying the ground for an event that would eventually become known as the Paralympics, which are recognized as first officially taking place in Rome in 1960. He died in 1980 at the age of 80.

Right from the start, when small teams of patients competed in wheelchair sports in the 1948 event, Guttmann had outlined his "dream" for an Olympic Games for people who are disabled, Loeffler said.

The idea seemed outlandish at the time, she noted.

"Everybody thought he was quite mad. It was 1948, disabled people were second-class citizens. If you were in a wheelchair, you couldn't get off the pavement. You had to have help everywhere you couldn't travel...He was a man of vision."

Loeffler trained as a physiotherapist, working briefly in her father's unit and volunteering at the games. 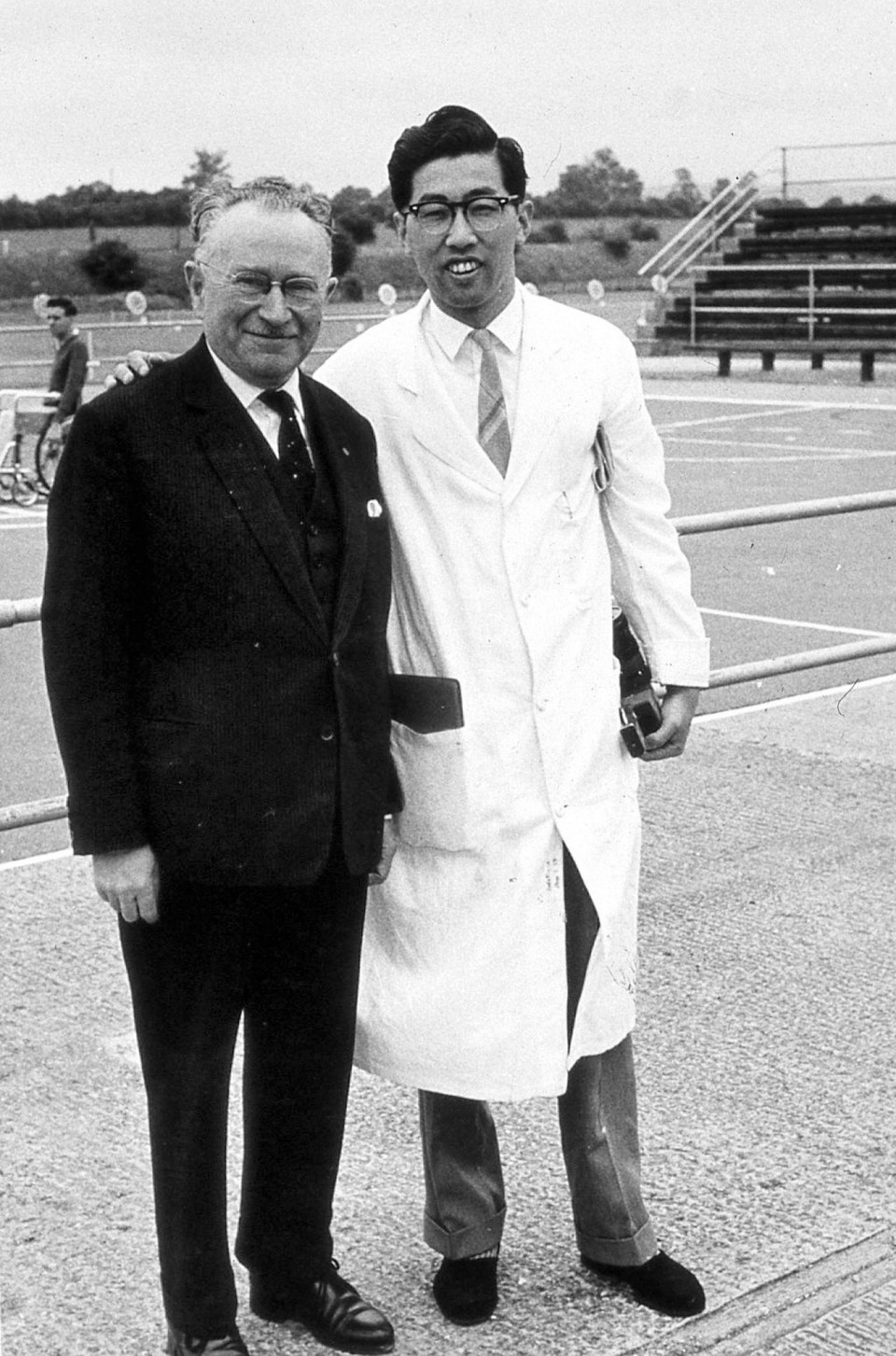 Ludwig Guttmann (L), the "father" of the Paralympics, and Yutaka Nakamura, a fellow surgeon who studied under Guttmann, stand together at the Stoke Mandeville Hospital in Buckinghamshire in southern England in 1960. (Photo courtesy of Japan Sun Industries)(Kyodo)

She said her career was more of her father's choice than her own, though she admits the medical knowledge helped in her later work with wheelchair sports groups, having inherited Guttmann's role as a games organizer after his death.

Since the early Stoke Mandeville Games, the Paralympics have grown beyond all recognition into an elite global tournament that she says her father would have "loved."

"I think the competition is still a source of motivation. Because if you're sitting in a wheelchair -- perhaps you've had some accident, got a spinal cord injury -- and you see films of wheelchair athletes competing. For young people, it must be a wonderful goal. They can see what can be done and actually aim for it. And I think that's really what the Paralympics give -- inspiration and hope."

Guttmann's work influenced medical professionals around the world, among them Yutaka Nakamura, a fellow surgeon who studied under him and was a key figure in organizing the Paralympics in Japan in 1964.

Though Loeffler did not meet Nakamura, she was recently introduced to his son via video call, where they shared memories of their fathers' lives and work.

"Nakamura seems to have been a wonderful man who died far too young," Loeffler said, adding it was "exciting and surprising" watching this year's Olympics and is looking forward to the Paralympics, though she is saddened by the lack of spectators.

Otherwise, she said, "The competition is no different at all. It's just the cheering which has gone and the clapping."

"The drama, all that's going on, is just the same." 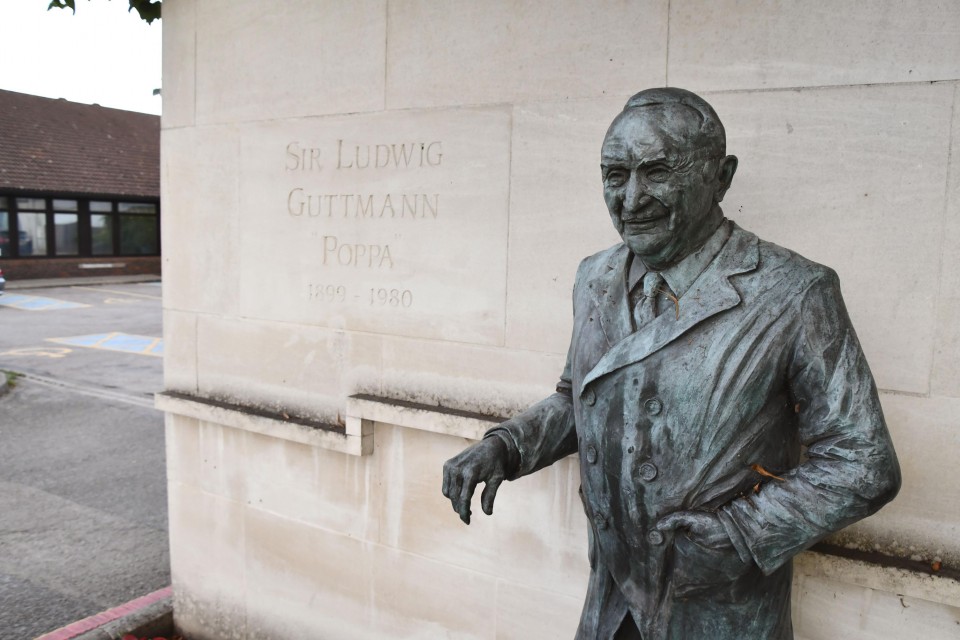 A statue of Ludwig Guttmann, the "father" of the Paralympics, stands at the entrance of the Stoke Mandeville Hospital in Buckinghamshire in southern England on Aug. 12, 2021. (Kyodo)