Half a year since the military ousted a democratically elected government in Myanmar and plunged the Southeast Asian country into chaos, there are few signs that the situation will stabilize any time soon.

Harsh crackdowns on anti-coup protesters and others have left over 900 people dead since the Feb. 1 military takeover, according to a rights group monitoring the situation, while spawning armed resistance among citizens opposed to military rule.

The deteriorating security environment is such that some observers are warning of the possibility of the country descending into civil war. 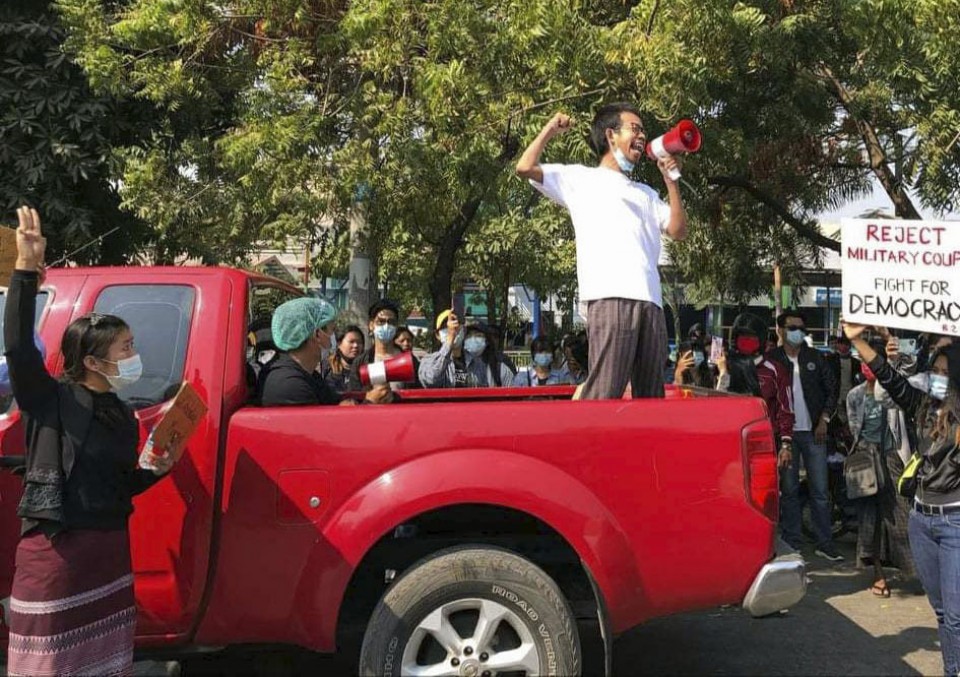 Meanwhile, Myanmar's once-thriving economy has been sent into a tailspin as doctors and others refuse to work as part of a civil disobedience movement.

The international community -- particularly the Association of Southeast Asian Nations, which includes Myanmar -- has been unable to facilitate an effective solution to the political crisis. An ASEAN special envoy to Myanmar that leaders of the group agreed to appoint months ago has yet to be chosen.

Shortly after the coup, millions of people took to the streets across Myanmar, demanding the restoration of the civilian government and the immediate release of detained leaders such as Aung San Suu Kyi.

Such protests have dwindled in the months since, but people still stage demonstrations sporadically, calling for an end to military rule.

In the country's second-largest city Mandalay on July 7, a doctor showed up at a demonstration, surprising others there. Tayzar San had led the first anti-coup mass demonstration on Feb. 3, two days after the takeover.

Now the 33-year-old is a wanted man in Myanmar, with the military, known also as the Tatmadaw, offering 10 million kyats ($6,000) for information leading to his capture.

In a recent online interview from an undisclosed location, Tayzar San pledged to continue to protest to let those at home and abroad know that the military "hasn't been able to run the country for the past half year, even for one day."

The doctor and others organize protests using a highly secure communication app. They end the demonstrations in a matter of minutes before authorities can catch up to them.

While each of these protests entails significant risks to participants, the July 7 protest drew an unusually large crowd of about 500 people.

A parallel government formed by pro-democracy forces in the country following the coup has launched a so-called People's Defense Force that is engaging in guerrilla warfare in various parts of the country in a fight against the military.

Rising coronavirus infections are also weighing on the people of Myanmar. With the military seemingly unable to bring the pandemic under control, frustrations are growing.

"There is no letting up in people's thirst for democracy," Tayzar San said. "Our victory is near."

Some soldiers have also left the military and joined anti-coup movements after questioning the Tatmadaw's brutal use of force against protesters and others.

In interviews conducted by phone or online, two former soldiers called for the Myanmar people to keep their hearts strong and continue fighting for "democracy and our country."

Nyi Thuta, a 31-year-old former army captain, left the military about three weeks after the coup, turning his back on a career he had built over the past 15 years. He said that when the coup occurred, he "knew that I had to leave."

He is currently helping the civil disobedience movement by encouraging soldiers and others to join, all the while hiding in a forest in the country's south.

The former captain said some soldiers desire democracy and support the formerly ruling National League for Democracy party. "I voted for the NLD in (November's general election) because I want the best for my country, as well as real democracy."

Another man, a former officer in his late 20s, left the military about a month ago. He is currently training about 200 people, including former police officers, on how to fight the military in areas near the border with Thailand controlled by the Karen National Union armed ethnic minority group.

"The merciless Tatmadaw will inevitably perish one day. We believe we will win without fail," said the former officer, who wished to remain anonymous.

While resistance among the people has morphed into armed struggle in some cases, observers say the military, which effectively rules the country, still has the upper hand.

Yoshihiro Nakanishi, an associate professor at Kyoto University's Center for Southeast Asian Studies and an expert in Myanmar politics, said a revolution is unlikely in the short term as it would require division within the military.

What could happen instead is either the emergence of a government favored by the military after a military-engineered election or a prolonged period of military rule because circumstances make it difficult to hold a vote, according to Nakanishi.

But the military will probably not concede to pro-democracy forces supported by Western nations, he said, as that "would represent defeat in a power struggle and capitulation to meddling in internal affairs."

He predicted it would take time to solve the crisis.

Japan has so far kept its distance from the National Unity Government launched by pro-democracy forces in order to keep open its communication channel with the military.

Nakanishi said Tokyo should put pressure on the military to enable Japan to advance humanitarian assistance in areas such as health care, poverty alleviation and education, on the understanding that this assistance is intended for the Myanmar people.

He also called for a review of Japan's official development assistance to Myanmar, particularly large-scale infrastructure projects, the continuation of which may be unacceptable to people in both countries.

"The time has come (for Japan) to reconsider its Myanmar policy and develop a new one," he said.

Top member of Myanmar's NLD dies under detention of COVID-19