Paralympic Refugee Team athletes hope to preach the gospel of sports when they compete in the upcoming Tokyo Games by showing displaced and disabled people around the world how their sporting experiences have transformed their lives.

One woman and five men with roots in Afghanistan, Burundi, Iran, and Syria will compete in athletics, swimming, canoe and taekwondo as members of the refugee team, which is headed by Chef de Mission Ileana Rodriguez, a former refugee from Cuba who represented the United States in swimming at the 2012 London Paralympics. 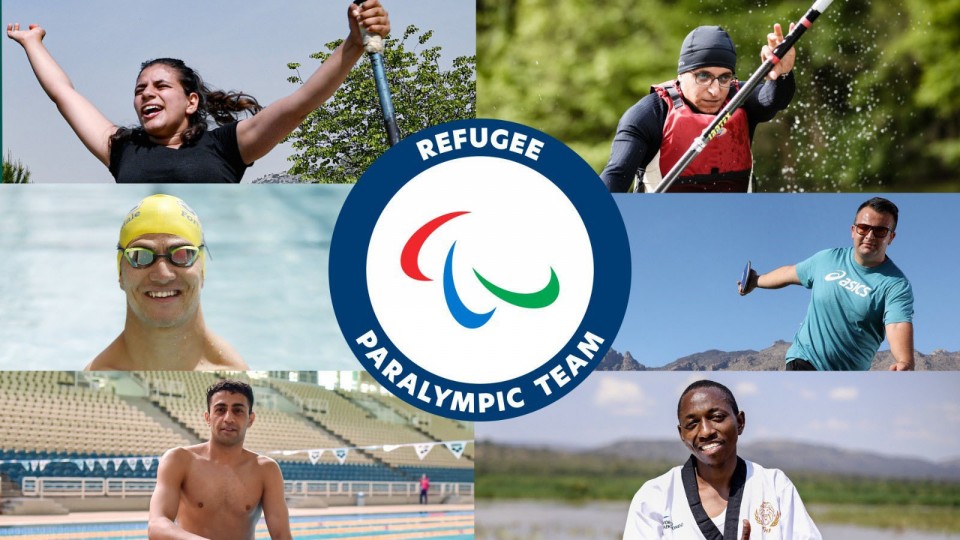 Supplied photo shows six athletes who will participate in the Tokyo Paralympics as members of the refugee team. (Photo courtesy of the International Paralympic Committee)(Kyodo)

"The refugee team is not just a team, it is a family," said Ibrahim Al Hussein, a Syrian refugee swimmer, through an interpreter during a recent online interview with Kyodo News ahead of the start of the Paralympics on Aug. 24.

According to the International Paralympic Committee, about 12 million of the over 82 million forcibly displaced people around the world have some degree of disabilities.

"Sports make me forget about my amputated leg and forget about my injuries and the very tough experiences I had," said Al Hussein, who carried the Paralympic flag at the opening ceremony of the 2016 Paralympic Games in Rio de Janeiro to represent the first-ever Independent Paralympic Team. At the time, it featured just two athletes who were both refugees and asylum seekers.

Parfait Hakizimana, a Burundian Para taekwondo athlete, says he found happiness despite living in a refugee camp in Rwanda as sports taught him not to give up on his hopes of a bright future. His mother was shot to death in Burundi, and a gunshot injury he suffered permanently disabled his left arm.

"Sports helped me make many friends with people whom I trained together with and met through activities. I actually am someone with a future," he said.

Alia Issa, a Syrian refugee residing in Greece, will be the first woman to join the Paralympics refugee team.

Competing in club throw -- a Para athletics discipline for athletes who cannot hold a javelin, shot put, or discus -- she hopes to show people, especially young women, how sports can open up a world of opportunities for them.

"I am a role model for other girls," she told Kyodo, pointing out that a smaller proportion of female athletes take part in the Paralympics compared with the Olympic Games.

According to the IPC, the International Olympic Committee's quota allocation showed that almost 49 percent of the athletes who participated in the Tokyo Olympics were women, winning the event plaudits for being the first gender-balanced games in history.

At the Paralympic Games running through Sept. 5, at least 40.5 percent of all the athletes will be women, according to the IPC qualification criteria, up from 38.6 percent at the Rio 2016 Games.

"Women shouldn't just stay at home. They need to get out, take part in sports and make their everyday life better," said Issa.

An illness she suffered at a young age resulted in brain damage that left her with impairments.

She faced difficulties at school due to her disabilities, but she says her encounter with sports saved her from hardship, allowing her to gain more confidence in her body and mobility.

Issa first tried boccia, a precision ball sport contested by players with severe disabilities, but later moved on to club throw, which seemed to suit her better, according to one of her coaches.

Her club throw performances have significantly improved since she switched to throwing it backward instead of forward, considering the characteristics of her disabilities. Following intensive training, she now consistently throws around 14 meters, the coach said.

"My goal in Tokyo is to have a very good competition and reach 17 meters," Issa said.

She still hopes there will be some fans at the competition venues to inspire athletes to push harder but understands it is beyond her control considering the resurgence of COVID-19 cases in Tokyo powered by the highly contagious Delta variant of the coronavirus.

She said the Paralympics, regarded as the biggest event for disabled athletes, with or without spectators, will provide a powerful stage to convey a message to the world.

Noting that disabled sports events are generally not televised, she said: "People can watch these athletes on TV, and it's something unique."

Someday, she hopes to participate in the games as a member of the Greek national team. "It's the country where I grew up," she said.