The foreign ministers of Japan and the Association of Southeast Asian Nations agreed Tuesday on the importance of freedom of navigation in the South China Sea, where China has conflicting territorial claims with some of the 10-member bloc.

In an online meeting with his ASEAN counterparts, Toshimitsu Motegi stressed Japan's opposition to any attempts to unilaterally change the status quo of the Indo-Pacific by force, but did not single out China, according to the Japanese Foreign Ministry. 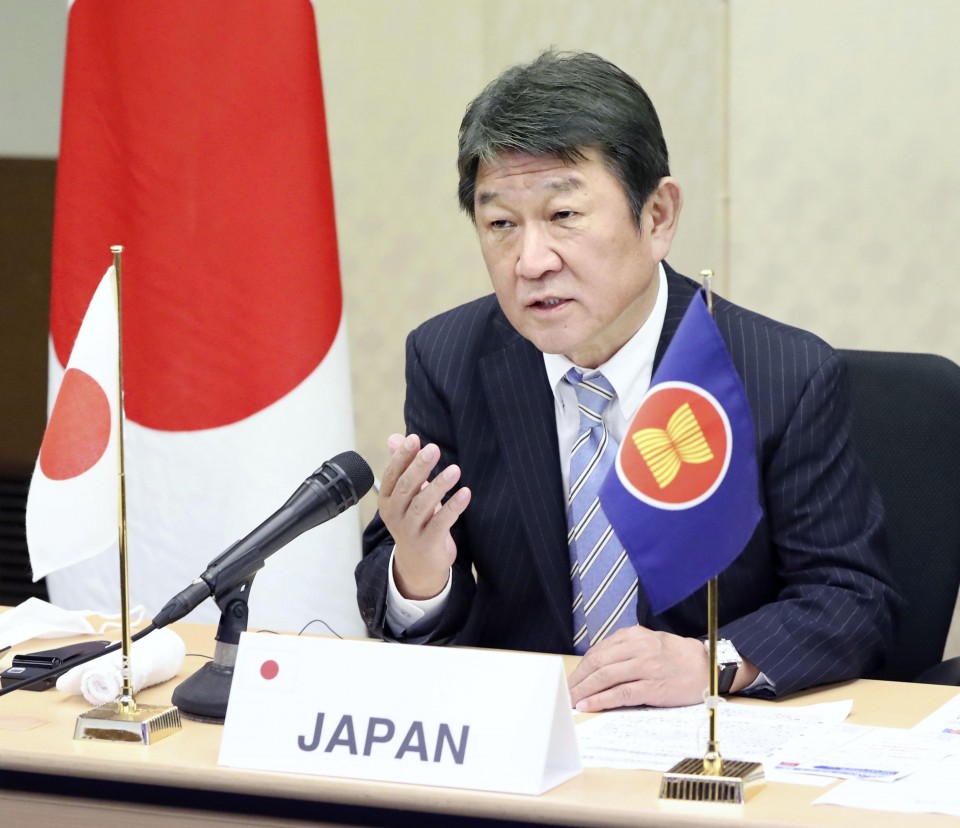 "As we face the challenge posed by the coronavirus pandemic, it is important for us to maintain and strengthen principles of the rule of law and transparency in the Indo-Pacific region," Motegi said at the beginning of the talks.

Motegi also reiterated Japan's support for ASEAN's bid to implement its five-point consensus on how to tackle the political crisis in Myanmar following a Feb. 1 coup by the military, including the immediate cessation of violence and constructive dialogue among all parties concerned, the ministry said.

Touching on ASEAN's effort to dispatch a special envoy to help deal with the situation, Motegi said, "A tangible result will be needed," promising Tokyo's continued engagement with ASEAN's actions on the matter.

The Japanese minister invited the leaders of the ASEAN countries to Japan for a summit in 2023 to commemorate the 50th anniversary of building friendship and cooperative relationships between Tokyo and the regional bloc.

The ministers also discussed cooperation in responding to the coronavirus pandemic, with Japan pledging to provide more vaccine doses and support for the health care system in the ASEAN countries. Tokyo has so far offered 9.6 million vaccine doses to the regional body, according to the ministry.

Japan and ASEAN ministers also agreed on the importance of stripping North Korea of its nuclear and missile development programs.

Four of the 10 members -- Brunei, Malaysia, the Philippines and Vietnam -- as well as Taiwan have overlapping territorial claims with China in the South China Sea, through which much of Japan's oil imports pass.

In a separate meeting, foreign ministers of ASEAN, Japan, China and South Korea -- a cooperation framework known as ASEAN plus three -- discussed the importance of an early implementation of the Regional Comprehensive Economic Partnership, the Japanese ministry said.

The free trade pact, signed last November by all the 13 countries plus Australia and New Zealand and expected to be in force as early as by the end of this year, involves removal of tariffs on 91 percent of goods and standardization of rules on investment and intellectual properties.

On climate change, Motegi pledged Japan's assistance for the ASEAN countries' transition to a carbon-free society.