A new island has been discovered near Iwoto Island located around 1,200 kilometers south of Tokyo after a submarine volcano began erupting late last week, the Japan Coast Guard said Monday.

The new island is C-shaped, with a diameter of approximately 1 kilometer. It was discovered after the volcano some 50 km south of Iwoto in the Ogasawara Islands in the Pacific Ocean started erupting on Friday. 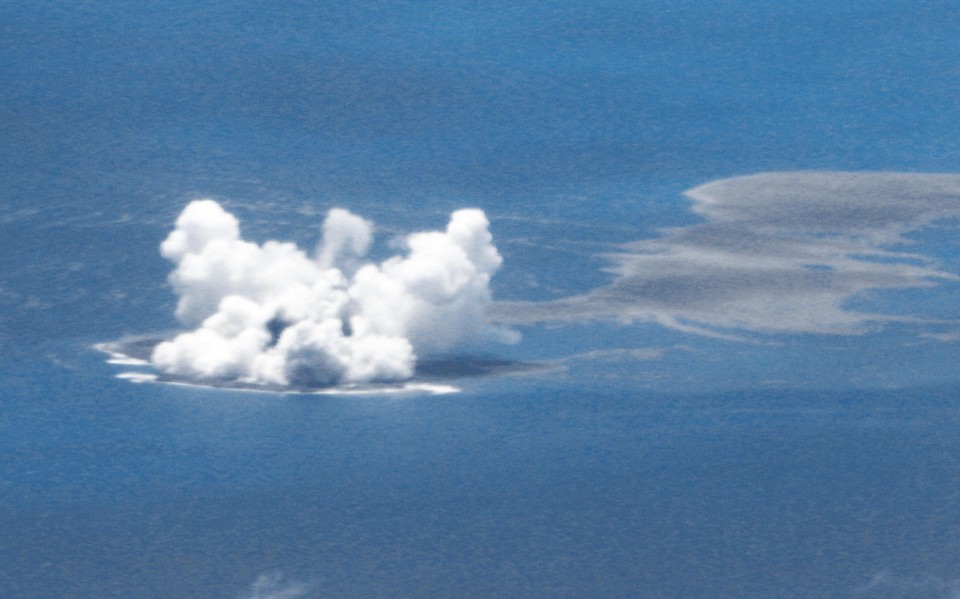 Photo shows eruption at a submarine volcano near Iwoto Island, located around 1,200 kilometers south of Tokyo, and a newly discovered island on Aug. 15, 2021. (Courtesy of the Japan Coast Guard)(Kyodo)

The Japan Meteorological Agency has issued warnings about smoke and large ash deposits in nearby waters as an active eruption is expected to continue.

The coast guard found the newly formed island when it observed the eruption from the air on Sunday, according to the weather agency. Pumice created by the volcanic activity was also found by the coast guard floating across a 60-km area in a northwest direction.

New islands have been confirmed in the area in 1904, 1914 and 1986, with all of them having submerged due to erosion by waves and currents.

The one found in 1986 sank after about two months, according to the coast guard.

As the submarine volcano is located near Minami Iwoto Island, the southernmost islet in the island chain, any new island in the area could be added to Japan's territory if recognized as a naturally formed island by international standards.

Given the location, however, the new island is unlikely to affect the country's territorial waters or exclusive economic zone even if it remains above the surface.