The Japanese government on Sunday started administering COVID-19 vaccine shots at Narita and Haneda airports to citizens who are returning from abroad temporarily to be inoculated.

Those subject to the inoculations include people living in places that use vaccines not approved by Japan as well as residents of some developing countries where the progress of vaccinations has been slow. 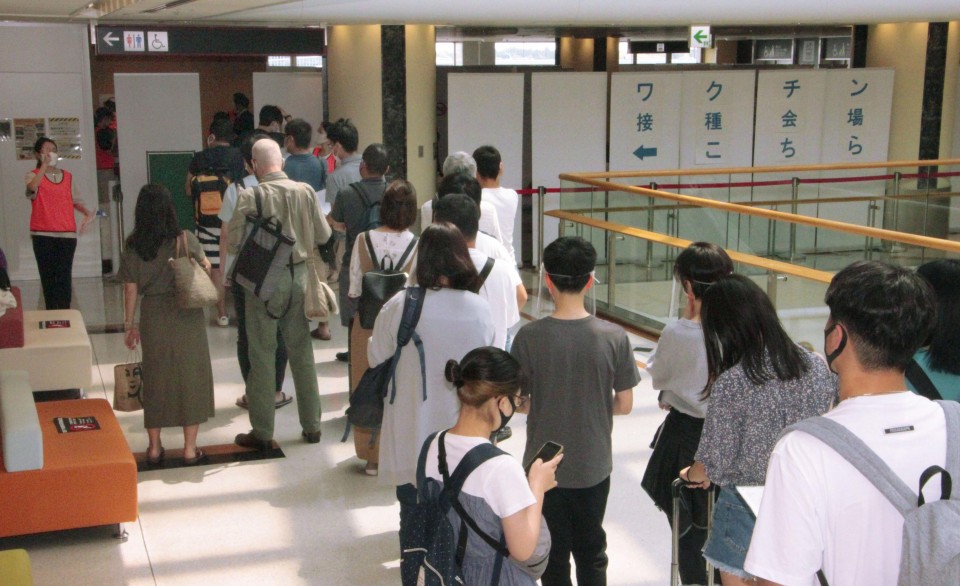 People line up at a venue set up for vaccine inoculations at Narita airport near Tokyo on Aug. 1, 2021. (Kyodo)

The government decided to start the inoculations for returnees before the Bon holiday season in mid-August after a Foreign Ministry survey showed many Japanese living abroad who have yet to be inoculated wish to receive vaccine shots in Japan, government officials said.

Shunsuke Hosoi, a 38-year-old employee of an auto parts maker returning from Vietnam, lined up to receive a vaccine shot at a venue set up for inoculations at Narita airport near Tokyo.

"In Vietnam where inoculations have not progressed, many people are feeling the inconvenience as they are restricted from going out," Hosoi said. "I want the Japanese government to increase opportunities for Japanese nationals to receive vaccine shots."

At a similar venue at Haneda airport in Tokyo, people lined up before the opening at 10 a.m. to receive the shots.

"When we live abroad, it is sometimes burdensome to receive medical services similar to those offered in Japan. I am thankful for this kind of measure," said a man in his 50s who has returned from Italy.

The government plans to operate the venues at Haneda and Narita airports through early January next year to administer two doses of Pfizer Inc.'s vaccine to people aged 12 and over who do not have certificates of residence in Japan.

The shots are offered for free, although returnees need to shoulder their own travel expenses. Applicants need to book reservations at a special website set up by the ministry, the officials said.

Returnees can receive the inoculations either on the day of their return before undergoing a two-week quarantine period or after the period ends.

The reservations can only be made via the website, which accepts bookings between two months before the date of inoculation and a week beforehand.

Certificates of vaccination will be issued after the second dose of the vaccine for those who want them, the officials said.