Testing of fertilized eggs during in-vitro fertilization treatment to identify genetic diseases before pregnancy will be expanded to cover conditions that develop after adulthood, the Japan Society of Obstetrics and Gynecology said earlier this year, in a decision already questioned by one disabled group.

Preimplantation genetic testing, first approved by the society in 2004, examines chromosomes and genes of fertilized eggs at the request of people concerned about the possibility of passing on a genetic trait. Applicants are required to be undergoing IVF treatment. 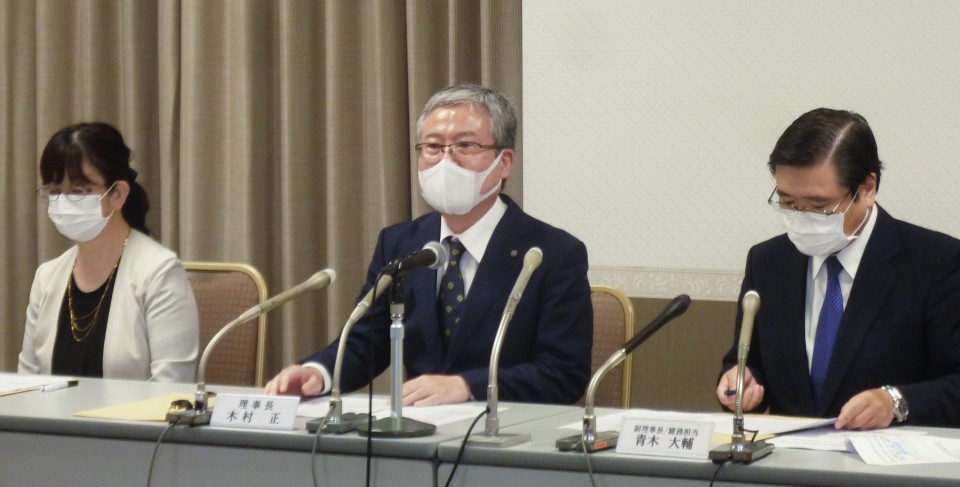 Photo taken on June 26, 2021, shows Tadashi Kimura (C), executive board chairperson of the Japan Society of Obstetrics and Gynecology, holding a press conference in Tokyo about the society's final report on preimplantation genetic testing. (Kyodo)

But the testing has often met criticism since it could lead to only fertilized eggs without abnormalities being selected as worthy of life.

Given the ethical concerns, the society has been examining each application submitted by medical institutions based on requests by prospective parents on a case-by-case basis. It has allowed testing only for serious genetic diseases, except for cases in which women suffer miscarriages repeatedly.

Under the society's internal regulations, serious genetic diseases are currently defined as conditions that "severely impair one's daily life or threaten his or her life before becoming an adult."

According to the society's final report compiled in April, the definition will add the word "in principle" before "becoming an adult," effectively expanding the scope of diseases that would be subject to genetic testing.

It also added requirements that diseases have no effective treatment at this point or that treatment imposes a significant burden on patients.

If a couple wants to conduct preimplantation genetic testing, they need to receive genetic counseling and their hospitals need to submit an application to the society, which will summarize views on whether to conduct the tests.

For genetic diseases that had not been examined previously, the society will conduct screening based on views to be submitted by a group of experts regarding particular diseases.

The society will start examining applications under the new definition after it revises internal regulations.

Nobuko Mikata, head of a group of people suffering from neuromuscular diseases, said the society's decision provoked "anger and shock" among its members.

"We can live our lives with disabilities if there is support from society," said the Network of Peers with Neuromuscular Diseases, which includes patients of diseases that are subject to genetic testing.

"We oppose every test that would exclude lives because they have disabilities," the network said. "We hope that the social system, in which people without disabilities stand in the superior position, will face up to our existence and that society will catch up with our beliefs. The weight of every life is equal."

At a council meeting of the society in February, a woman who says her son inherited eye cancer said, "My sense of guilt never disappears when I think that my son has to suffer from anxiety and inconvenience. If patients and their family want to conduct testing, I want it to be approved swiftly."

In all, the society has accepted 336 applications for tests aimed at preventing births of babies with serious genetic diseases and approved 302 cases as of July 30.