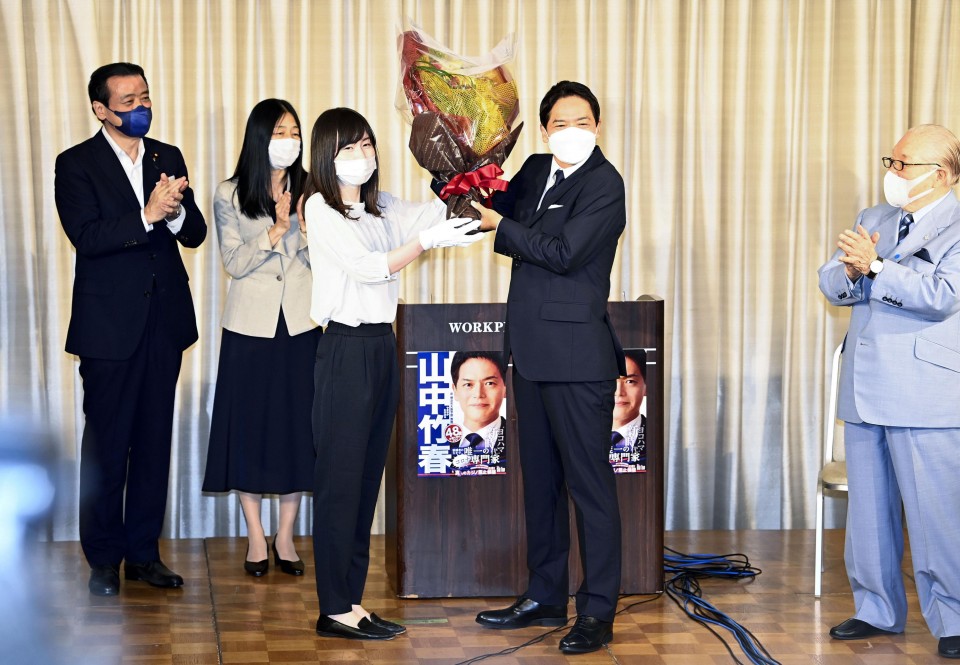 The loss by Hachiro Okonogi, a former chairman of the National Public Safety Commission, comes as Suga suffers from falling public support amid dissatisfaction with the government's COVID-19 response.

TOKYO - Japan plans to dispatch a Self-Defense Forces plane to Afghanistan to evacuate Japanese nationals there and local staff who have worked for the Japanese Embassy amid the worsening security situation in the country, government sources said Sunday.

The government, which plans to send the aircraft as soon as preparations are complete, will also evacuate local staff that worked for the Japan International Cooperation Agency and other organizations, the sources said.

Motegi filed the request in a meeting with Raisi, an anti-U.S. hard-liner who took office earlier this month, in the Iranian capital.

TOKYO - The Tokyo metropolitan government confirmed on Sunday 4,392 new coronavirus cases, marking the highest figure ever reported for that day of the week.

The number, which surpasses the 4,295 cases reported last Sunday, was down from the 5,074 new cases the previous day, when they topped the 5,000 level for the fourth straight day.

TOKYO - Forwards Yuya Osako and Yoshinori Muto promised on Sunday to deliver for Vissel Kobe as the pair returned from European clubs to the J-League first division.

SINGAPORE - U.S. Vice President Kamala Harris arrived in Singapore on Sunday as part of her first official trip to Asia that aims to show U.S. commitment to the Indo-Pacific region amid the growing clout of China.

Her two-nation trip to Asia, which includes Vietnam, comes as U.S. President Joe Biden faces strong criticism at home and abroad over the chaos caused by the hasty U.S. troop withdrawal from Afghanistan amid the Taliban's recent takeover of the country.

SYDNEY - Australian Prime Minister Scott Morrison said on Sunday that it is time to shift focus from case numbers to hospitalizations, as widespread outbreaks of the highly infectious Delta variant make it "highly unlikely" Australia will return to zero cases of community transmission.

The admission marks a big shift in Australia's until now largely successful elimination strategy that has seen strict border restrictions and snap lockdowns as the central features of the country's pandemic response.