Five months since the military toppled a democratically elected government in Myanmar, ASEAN has not been able to appoint a special envoy to help defuse the member country's political crisis and a major obstacle seems to be disunity within the group.

Disagreement among ASEAN countries over the envoy's selection appears to be helping Myanmar's military, which wants to buy time to solidify its rule, but that has also led to frustrations for some within ASEAN who want to engage in the issue more actively.

Leaders of the 10-member Association of Southeast Asian Nations had agreed on a "five-point consensus" at a summit in the Indonesian capital Jakarta in April that included appointing a special ASEAN envoy to Myanmar. 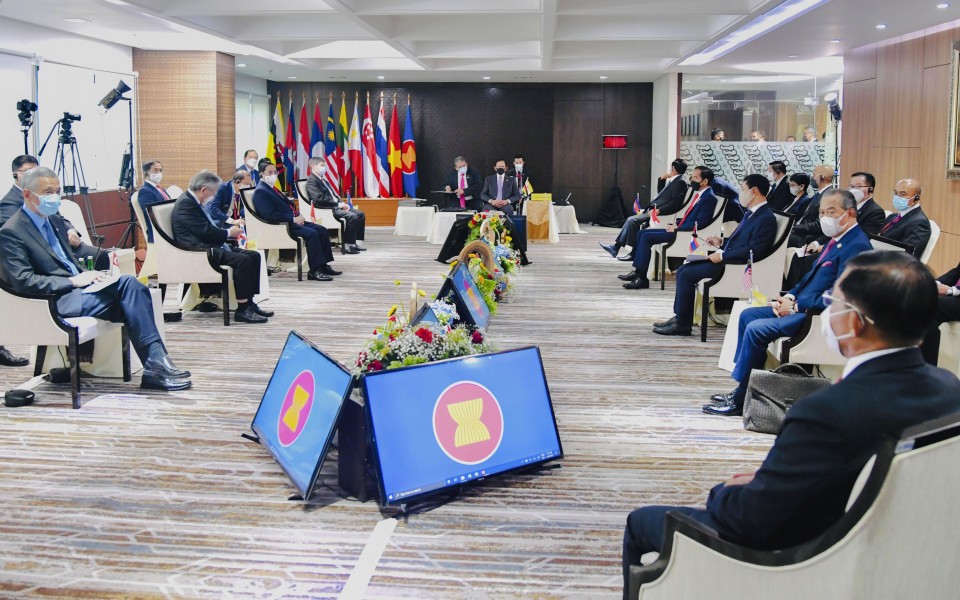 The envisaged envoy would try to mediate in the dialogue process between various parties in the country, where pro-democracy forces were ousted from power in the Feb. 1 coup, with civilian leader Aung San Suu Kyi put under house arrest.

ASEAN sources say there are three nominees -- Virasakdi Futrakul, a former Thai deputy foreign minister and veteran diplomat, Hassan Wirajuda, a former Indonesian foreign minister, and Razali Ismail, a Malaysian who was a U.N. special envoy for Myanmar in the 2000s tasked with facilitating national reconciliation and democratization in the country.

Thailand, Indonesia and Malaysia all want their man to be the envoy.

But putting the onus squarely on Indonesia, one ASEAN source said the appointment of the ASEAN envoy is now delayed "because some countries are adamant that their nominee should be the envoy, namely Indonesia."

"We have to discuss further to resolve this," the source added, speaking on condition of anonymity.

Amid the horse-trading and digging in of hooves among some member countries, Myanmar's military does not feel pressured to take any action on the envoy issue.

A month since Brunei's second foreign minister, Erywan Pehin Yusof, met with coup leader Senior Gen. Min Aung Hlaing and submitted a list of nominees for the special envoy during his visit to Myanmar in early June, there has been no official letter from the military about its choice.

Indonesia believes Hassan as the special envoy can bring momentum toward a solution, and wants to get on with the process, a second ASEAN source said.

But the military seems to be leaning toward the Thai candidate. The source said that is partly because the Tatmadaw, as Myanmar's armed forces are also known, "is no longer interested in the Indonesian model of democratic transition but prefers the Thai model where the military wields superior political leverage and policy influence."

Signs of disunity among ASEAN members on the issue were already apparent when Thailand's prime minister skipped the special summit in April held to discuss the Myanmar situation.

Muhadi Sugiono, an expert in international relations at Indonesia's Gadjah Mada University, observed that while the summit can be considered a "breakthrough" for ASEAN given its longstanding policy of non-interference in the internal affairs of member countries, the group would have a hard time taking a strong stance against Myanmar's military.

"We all know that the Thai military junta came to power by ousting the country's democratic government. This will surely be a big problem for ASEAN in taking strong measures against Myanmar."

Malaysia is also interested in filling the envoy's post but has not been pushing for it as strongly as Indonesia, according to the sources. So far, Singapore has not nominated any candidate.

Meanwhile, Brunei as current chair of ASEAN is pushing for a compromise by trying to convince Myanmar's military to choose a slate of three ASEAN envoys instead of just one.

But "ASEAN and Myanmar have not yet made the final agreement about the special envoy after ASEAN asked the Myanmar junta to decide on the number of special envoys," said an official from one of the three countries pushing to have their nominee appointed. "There is no response so far," the official added.

The envoy issue also appears to have become intertwined with the domestic and strategic agendas of the nominating countries. The objective for these countries has become "more than solving the crisis in Myanmar," the second ASEAN source said.

Indonesia wants to play a role in stabilizing the situation in Myanmar to demonstrate its usefulness and strengthen the power position of President Joko Widodo and others, while Thailand wants to "ensure its border security and commercial interests vis-a-vis Myanmar are secured," the source said.

On the other hand, Malaysia "feels it should not let Indonesia and Thailand have their ways without due regards to Malaysian interests," such as the issues related to Rohingya refugees and the issue of Myanmar migrant workers in Malaysia, the source added.

Hikmahanto Juwana, an international law professor at the University of Indonesia, said the role of the special envoy is to "listen to the voice of the Myanmar people and propose the establishment of an interim government that will hold an election monitored by ASEAN."

"ASEAN must also communicate with other countries, especially China, on which Myanmar relies a lot, to push Myanmar," Hikmahanto said. Rather than intervene in Myanmar's internal affairs, "China must show support for what ASEAN does," he added.