But in the last year, a solution has arisen -- a campaign gradually spreading nationwide to encourage such women to book out a bathhouse together for what have come to be known as "Maiden Onsen" events.

And along with allowing them to once more enjoy the restorative mental and physical benefits of the waters, the gatherings also help in another way -- by giving the women a chance to talk with other sufferers about how they cope with their illnesses. The initiative was launched last year by Ai Watanabe, 49, who had a mastectomy to remove her left breast in 2018 and felt reluctant afterward to visit a bathhouse despite her love of onsens.

The first event was in Watanabe's hometown of Amagasaki, Hyogo Prefecture, but they have since expanded to Osaka Prefecture and Hokkaido with plans for many more across the country.

Watanabe established an online group for breast cancer patients last June, where she could share her experiences of dealing with breast cancer with other women via social media.

That was how she learned that many women who have undergone breast cancer treatment feel low self-esteem due to their scars or hair loss. Some even expressed fear of "surprising small children" as a reason to avoid going to public bath facilities.

The initiative then took shape when an opportunity arose for Watanabe to speak with the owner of a local public bath about such anxieties. The owner offered her facility for a trial event last October.

"I hope that this (Maiden Onsen events) becomes a place in society where cancer patients, who can be left feeling isolated after their treatment, can connect," said Watanabe.

Kaori Sasaki, 58, chairperson of a conference engaging in activities for the advancement of women and gender equality in Hakodate, Hokkaido, was inspired by Watanabe's example to take up a similar idea that a friend had proposed before passing away several years ago.

The friend, who had lost her hair after chemotherapy treatment for ovarian cancer, told her that she could not fully enjoy her experience at a hot spring because she would wear a wig out of concern for others.

"She said she hoped to bathe without the wig someday" and thought how easy it would be if women like her could reserve an onsen to themselves. Although Sasaki promised to fulfill the request, her friend passed away six months later, in October 2019.

Receiving advice and material from Watanabe, Sasaki carried out the first Maiden Onsen event in Hokkaido on June 16 in cooperation with "Emi Hakodateya," a hotel in the Yunokawa Hot Spring district on the outskirts of Hakodate. 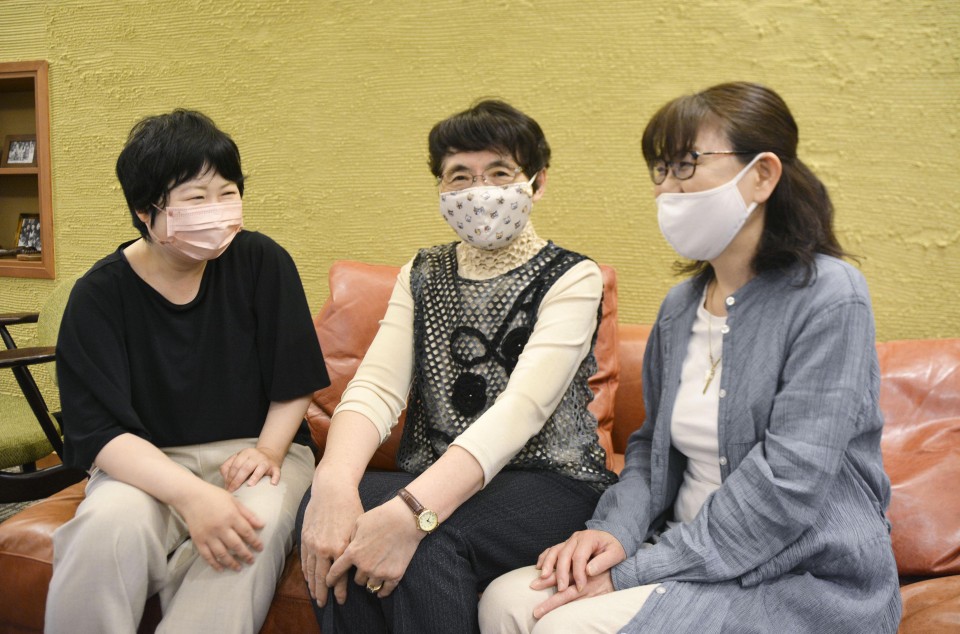 Photo taken June 16, 2021 shows women who participated in the first Maiden Onsen event in Hakodate conversing after enjoying a dip in a hot spring exclusively for women undergoing treatments for cancer. (Kyodo)

Fifteen women attended, paying 1,000 yen each to reserve the facility from 11 a.m. until 2:30 p.m. Yoga and art therapy were also available, and the hotel plans to continue holding the women's onsen event on the third Monday of each month.

Yuna Uesugi, a 29-year-old company employee in Hakodate who lost her hair after undergoing treatment for cervical cancer, had stopped going to onsens because of the unwanted attention she felt.

But after attending a Maiden Onsen event, Uesugi said, "I am happy now that I don't have to deny myself this enjoyment because of an illness."

"It was really encouraging to talk with the other participants while in the bath about our diseases. Everyone was cheerful and I gained courage from them," she added.

Watanabe, who also came to the Hakodate maiden event, said she was "glad" that other facilities were ready to cooperate.

She next plans to hold events in Shiga, Kyoto, and Fukuoka prefectures and has already started preparations to hold them in Tokyo and Niigata.

"I would like to see a lot more women with smiles on their faces once we take the Maiden Onsen nationwide," Watanabe said.