As the rise in telework amid the COVID-19 pandemic curtails interactions among employees, a growing number of Japanese companies are considering an inexpensive solution to the loss of workforce camaraderie -- esports tournaments.

On a weekday night in June, 40 people from 17 companies had gathered to observe an esports event organized by a group of employees at Net One Systems Co., a Tokyo-based IT service provider, at eXeField Akiba, a venue for esports activities in Akihabara, Tokyo's electronics hub.

It was the third esports competition conducted by the firm's employees, 90 percent of whom are currently working from home. New employees in particular have found it hard to get acquainted with colleagues, even in the sections they have been assigned to. 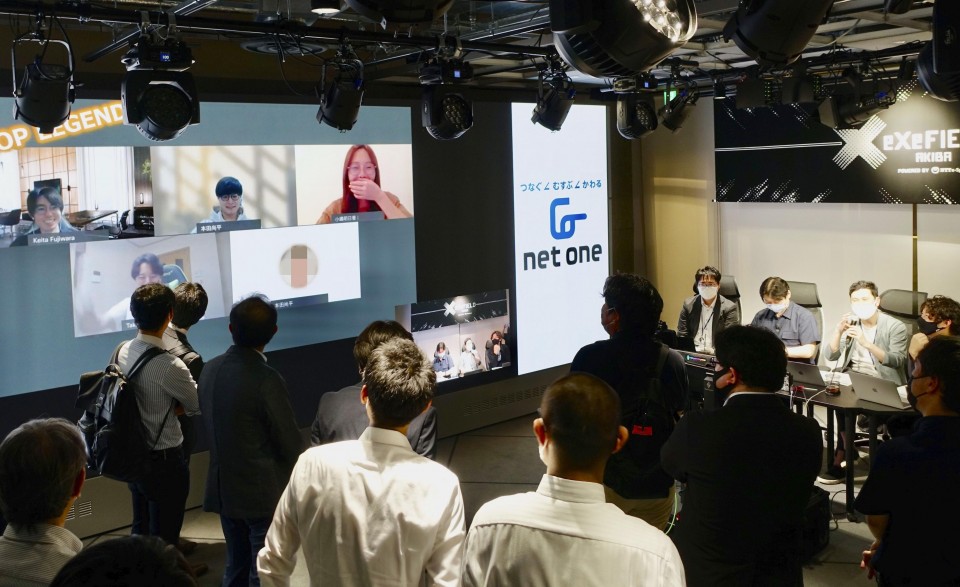 Photo taken on June 3, 2021, shows people from 17 companies gathering at eXeField Akiba in Tokyo's Akihabara to observe an esports event organized by a group of employees at Net One Systems Co. (Part of the screen has been pixilated for privacy reasons)(Kyodo)

The group, an informal association of employees, proposed the esports activity to meet calls from fellow workers for opportunities to develop more "lateral relationships."

The first event was conducted from 5 p.m. on a weekday in December, with eight employees gathering at eXeField. Kazuhei Seki, 32, head of the group, and a few other members served as facilitators and broadcasters of the event.

The contest started after players introduced themselves and were streamed to other employees on YouTube. Messages could be posted to root for players, and some 100 employees viewed the competition.

"No event held by the association in the past had been simultaneously attended by 100 employees," Seki said.

Encouraged by the favorable in-house response, the group held an online team competition in March to get more employees involved. Nine teams -- well exceeding what was expected -- attended, including those formed by employees who joined the company in the same year but were assigned to different regions of Japan as well as employees and their families. There have also been more in-house observers.

"The comments rooting for players are amusing and improve the atmosphere among employees. We now promote the event as a company," Takuya Tanaka, a director at Net One, said. "We will expand the base of participation by dividing participants into classes in accordance with their skills."

As a morale-building employee benefits program, esports events are a lot cheaper to arrange than regular company sports events, with employees able to join online from anywhere, even from their homes right after work.

The low cost is something Tanaka said he appreciates. Before the emergence of the pandemic, Net One used to spend nearly 10 million yen ($89,600) in total to hold annual futsal events for employees and their families on Saturday and Sunday, in both Tokyo and Osaka. In contrast, for an esports event, less than 1 million yen is required to reserve all of eXeField.

"Participation by young people was encouraging and depending on games, people of any generation can enjoy," an official from a major Japanese electronics manufacturer said after observing Net One's event in June.

"Neither the general affairs department nor the labor union can organize events amid the COVID-19 pandemic, so both are considering this. It's recommendable as an opportunity to interact, and an option for recreation as well as in terms of cost."