A South Korean official has expressed regret over a "unilateral leak" to news media of the contents of bilateral consultations on President Moon Jae In's possible visit to Japan and talks with Prime Minister Yoshihide Suga later this month when the Tokyo Olympics begin, calling on the Japanese side to act "prudently."

The Foreign Ministry official's acknowledgement Sunday that Moon is considering visiting Tokyo to attend the Olympic opening ceremony on July 23 and holding summit talks with Suga on the sidelines came after Japanese media reports in recent days about those possibilities. 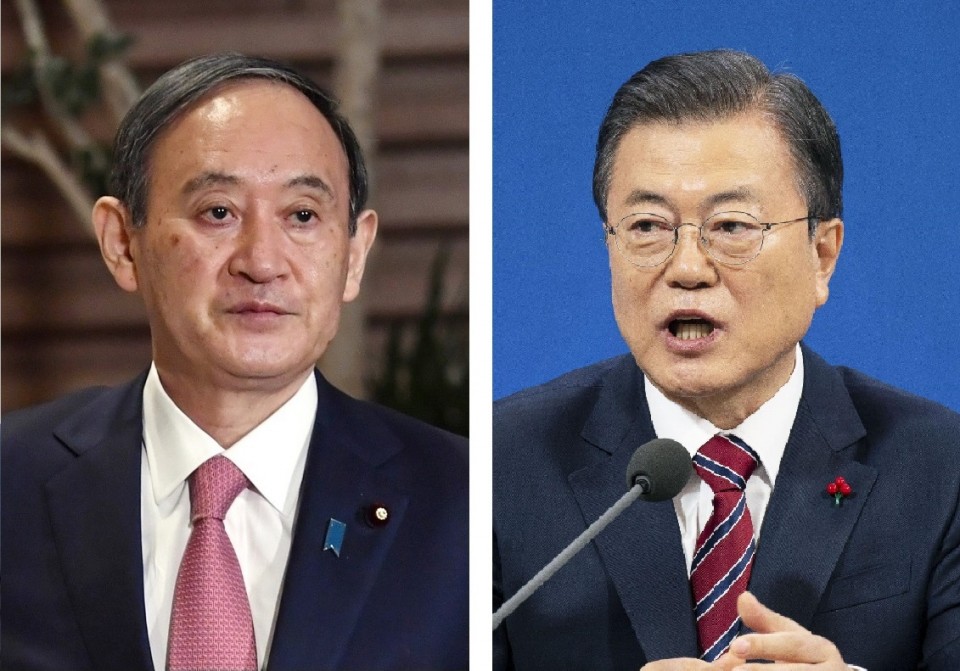 Kyodo News, citing a source at the prime minister's office, has reported that the envisioned talks could be kept to around 15 minutes -- much shorter than the roughly one hour expected by the South Korean side.

The Nikkei newspaper has reported that the Japanese government appears prepared to "cut short" the talks if South Korea does not show signs of taking concrete steps over compensation claims in its courts stemming from Japan's 1910-1945 colonial rule of the Korean Peninsula. Japan says all compensation issues were settled under a 1965 bilateral agreement.

Claiming that the contents of bilateral consultations on the possible Moon visit and summit talks with Suga have been "unilaterally leaked to the mass media from the Japanese position and standpoint," the South Korean official said those circumstances "make it difficult to continue government-to-government consultations."

While Seoul has been calling for full-fledged summit talks between the two leaders during a Moon visit to Japan, Tokyo remains reluctant to pursue the idea.

Japanese and South Korean leaders have not held summit talks since Suga's predecessor Shinzo Abe and Moon met in China in December 2019. Suga, who replaced Abe in September, merely exchanged greetings with Moon during a Group of Seven summit event in Britain last month.

Meanwhile, South Korean newspaper JoongAng Ilbo, in an online report Sunday, quoted a senior presidential office official as saying that Moon will consider meeting with Suga at the Olympics "only if there is sincere discussion of at least one of three pending issues to be resolved with Japan."

The three issues are historical ones surrounding former "comfort women" forced to work in wartime Japanese military brothels and wartime laborers, Japan's toughened controls of materials exported to South Korea, and a planned discharge of tritium-containing treated water into the sea from the crippled Fukushima Daiichi nuclear power plant, according to the report.