Taiwan will extend its coronavirus-induced restrictions for another two weeks though with some relaxations, authorities said on Thursday.

Health minister Chen Shih-chung, who heads the Central Epidemic Command Center, told a press conference that the current Level 3 epidemic alert, one level short a full lockdown, will remain in place until July 26, despite a steady decline of local transmissions.

Meanwhile, about 1.13 million does of British AstraZeneca vaccine donated by the Japanese government to Taiwan arrived at Taoyuan International Airport in the north on Thursday afternoon. 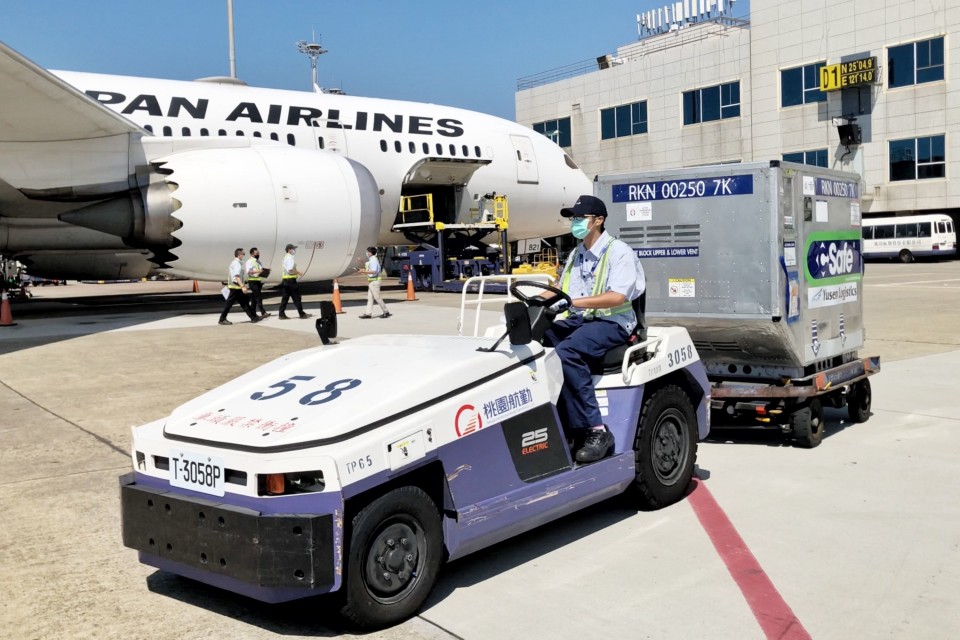 A container carrying coronavirus vaccines is carried from an aircraft at Taoyuan International Airport in Taiwan on July 8, 2021. (Central News Agency/Kyodo)

Chen thanked Japan for the latest donation, which comes after it supplied 1.24 million doses of the same vaccine in early June.

As of Thursday, Taiwan's total number of confirmed cases was 15,149, including 718 deaths.

After the capital Taipei and New Taipei City raised their epidemic alert to Level 3 on May 15, the Level 3 alert was issued for all of Taiwan on May 19 and has since been extended four times. The current restrictions were slated to end next Monday.

Under the heightened state of alert, wearing masks outdoors is mandatory, while gatherings of more than five people indoors or 10 people outdoors are prohibited.

All schools, public places and religious venues have been closed, and restaurants can only do take-outs.

Despite the two-week extension, some concessions will be made for such activities as going to national parks, museums or movie theaters.

Restaurants and beverage establishments can also resume offering dine-in services if they meet certain requirements such as maintaining at least 1.5 meters between co-workers and customers and among customers themselves.