"Hyogen no Fujiyu-ten Kansai" (Non-Freedom of Expression Exhibition Kansai) to be held through Sunday at a prefectural labor center, displays more than 20 works, also including a film featuring a scene where an image of Emperor Hirohito, the grandfather of the current emperor, is burned to ashes. 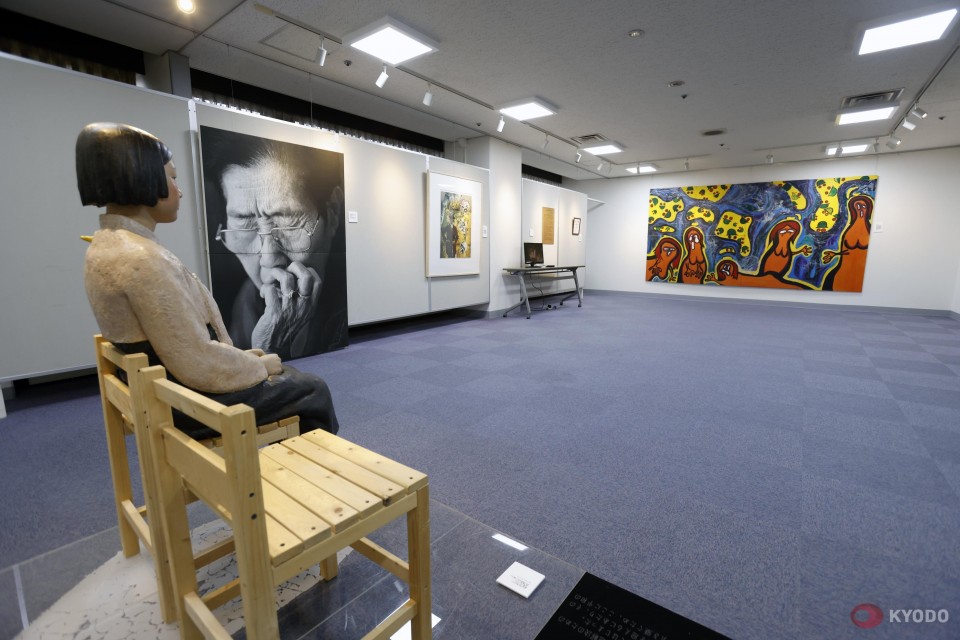 Photo taken at a labor center in Osaka on July 15, 2021, shows a statue of a girl symbolizing Korean women who worked in wartime Japanese military brothels, which will be on display at an art exhibition, titled "Non-Freedom of Expression Exhibition Kansai," starting there the following day. (Kyodo) ==Kyodo

People opposed to the exhibit continued protesting throughout the day, with demonstrators assembled nearby seen arguing with supporters.

As dozens of people lined up to see the exhibition before it opened, police were on guard after threatening letters and suspicious objects were sent to the venue since early this week.

On Friday evening, a knife-style letter opener and a letter protesting the event were mailed to the venue, according to labor center officials, who said they are considering filing a complaint with the police.

"Freedom of expression is being exterminated by this strange atmosphere in society. I am anxious about trouble, but I felt that if I missed this chance, I would not be able to see it again," said a 39-year-old Osaka resident who was among the visitors to the exhibition. 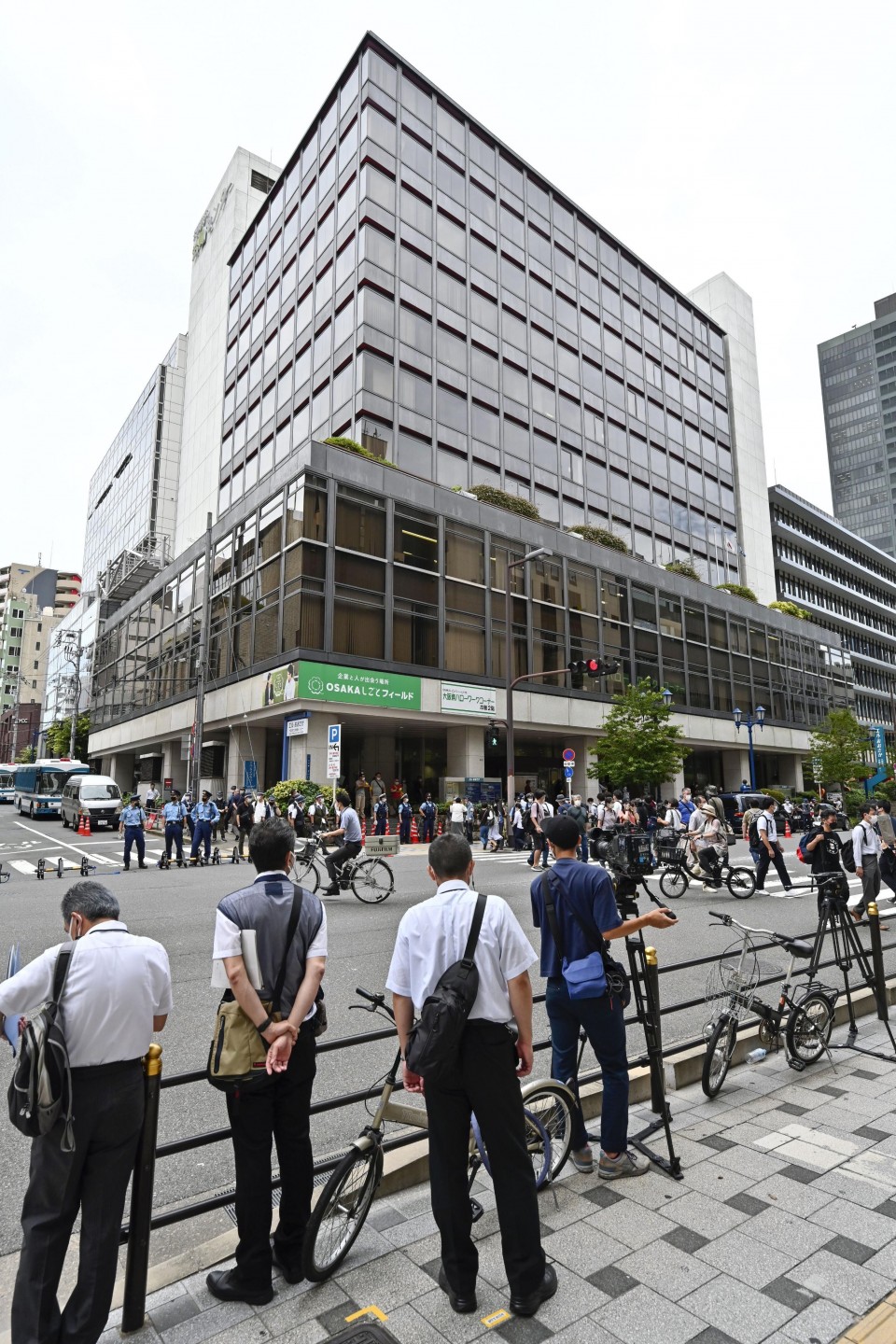 Protesters and police officers are seen in front of the venue of a controversial art exhibition, titled "Non-Freedom of Expression Exhibition Kansai," in Osaka on July 16, 2021. The three-day exhibition began the same day. (Kyodo) ==Kyodo

A member of the exhibition's organizing group urged people "not to crush the exhibition for holding a different opinion" and said it hopes people will go to see the works before making a judgement.

A man belonging to a nationalist group protesting against the event said, "It is politically biased and it is wrong to use a public facility to hold an exhibition which undoubtedly stirs controversy."

Although acts of violence are unacceptable, "It should be canceled before anything happens, as there have already been safety concerns," he added.

Some of the works exhibited in Osaka overlap with those shown at the Aichi Triennale 2019's section called "After 'Freedom of Expression?'" that was halted just three days after its opening due to protests and took about two months to reopen.

Japan's relations with South Korea remain strained due to a feud over compensation for wartime laborers and former comfort women used by the Japanese military.

Last month, the Osaka prefectural labor center L-Osaka withdrew its permission for the exhibition to take place, citing the difficulty of maintaining security. But the Osaka High Court on Thursday upheld a district court ruling saying the event should go ahead.

The Supreme Court's Third Petty Bench also dismissed on Friday an appeal filed by the labor center and ruled that the event should be continued, promptly making a decision as the event only has two more days to go.

The court said the latest case did not constitute any grounds for constitutional violation for which an appeal can be made, thereby giving the event the green light.

Osaka Gov. Hirofumi Yoshimura, who was in favor of canceling the permission, told reporters the same day that local authorities will abide by the top court's decision and vowed to boost security around the facility and ensure the safety of visitors.

But Yoshimura said he still views that there is "imminent threat" in holding the exhibit.

On Wednesday, the venue received a package containing liquid and a letter claiming the liquid was sarin, a deadly nerve agent, along with statements of protest against the exhibition. Police said the liquid appeared to be water. The venue also received on Tuesday a letter threatening to block the exhibition by force.

A similar exhibition that was set to open in Tokyo last month was postponed indefinitely due to disruption caused by nationalist protesters in vehicles using loudspeakers.

Another in Nagoya, which opened on July 6, was canceled after a suspicious package was received. 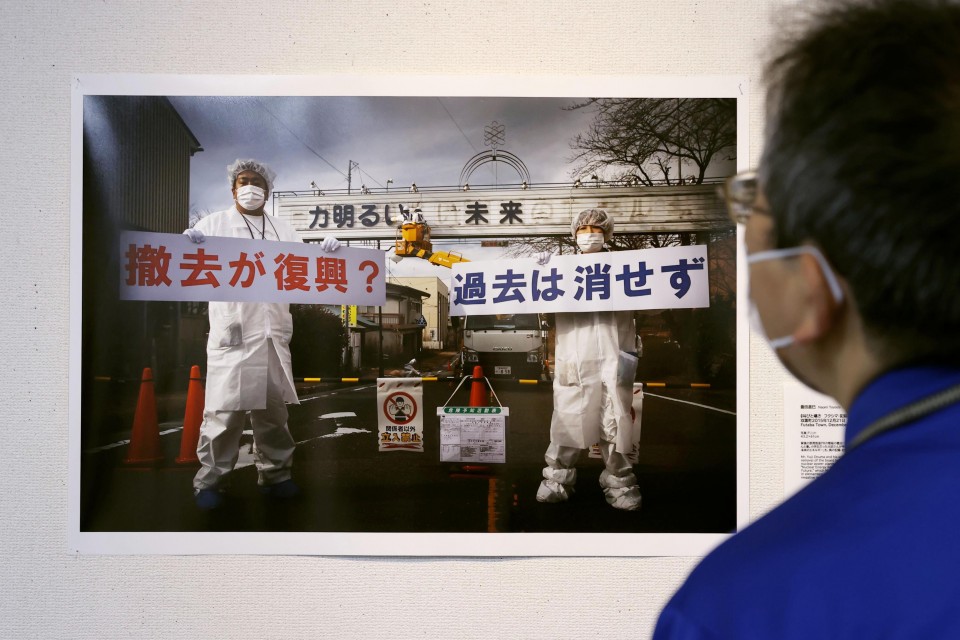 A visitor looks at a work at a controversial art exhibition, titled "Non-Freedom of Expression Exhibition Kansai," in Osaka on July 16, 2021. The three-day exhibition began the same day. (Kyodo) ==Kyodo