A decade on from their famous World Cup triumph in Germany led by Ballon d'Or winner Homare Sawa and friends, Nadeshiko Japan had a chance to replicate the same sort of success at an Olympic Games on home turf. Unfortunately, it was not to be.

In losing at the start of the knockout phase, the same stage in which they were ousted from the 2019 World Cup in France, the side once expected to establish a long-running rivalry with the United States at the top of the game no longer exists. 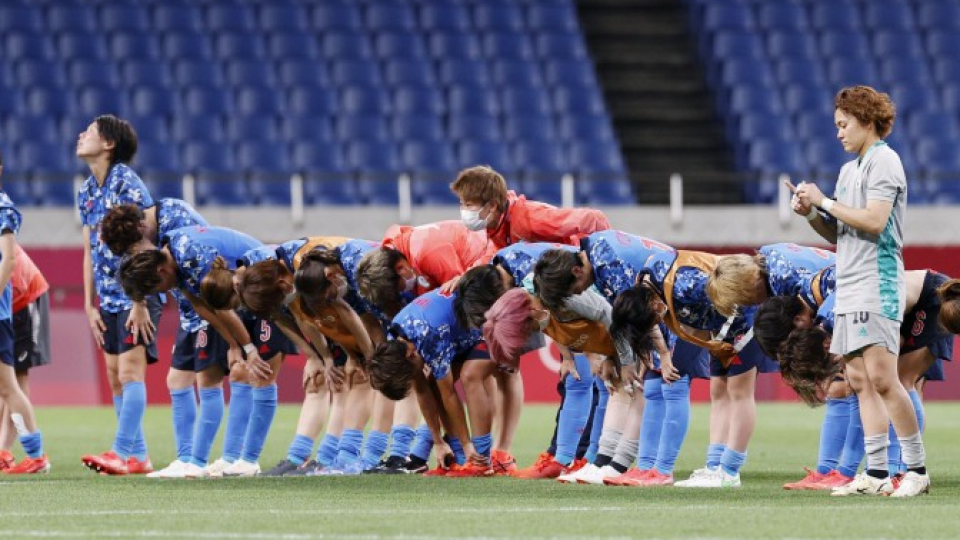 Japanese players look dejected after a 3-1 loss to Sweden in the quarterfinals of the Tokyo Olympic women's football on July 30, 2021, at Saitama Stadium near Tokyo. (Kyodo)==Kyodo

The Japan Football Association is set to review manager Asako Takakura's position over the summer with the team 10th in the FIFA rankings and an extensive evaluation on how they go about their business seemingly well overdue.

"When I got the job, the two main tasks were returning to the top (of the world) and making a generational change," she said after their last-eight loss to Sweden.

She did not come close to achieving that first target and there are big questions as to why.

In fact, the questions can extend to asking how a team with such a decorated history can manage no come-from-behind wins in a span of 66 matches while beating just three teams ranked above them.

"Our strength is the technique, collectiveness and dedication to the team in which we can play with organization and understanding of even minor details. What we lacked was physicality and strength inside the box," Takakura said after her team was sent packing.

The manager instituted a "physicality camp" to close that athletic gap, and the players surely made improvements, but ultimately could not prevent the defeat against the bigger and more athletic Swedes.

Making the most of their strengths of intricate passing and well-established combination play, Japan forced the in-form Swedes, perhaps the team of the tournament so far, onto the back foot at various spells. Their manager Peter Gerhardsson said Japan gave his team their "hardest game so far."

Those are the areas on which Japan have always thrived and are characteristics that will likely always exist.

The difference to the previous great Nadeshiko sides is the current team's lack of tenacity and the guile to see off games or to weather tough periods by force of will.

"There aren't that many players in this team who explicitly show their fighting spirit," said Takakura.

With fewer vocal leaders in this team compared to its past incarnations, the squad may have found it difficult to build the camaraderie required to achieve greatness.

Captain Kumagai, who has been given a huge role on and off the field in shaping the team, could have done with more experienced players around her, such as left-back Aya Sameshima, who was a late omission.

"Looking back also at the way we lost games at the 2019 World Cup, we had technique, dominated and did things the opponents do not enjoy, but there are question marks over whether we managed to scare them and get results," 30-year-old Kumagai said.

"That's where I believe the gap between us and the world is. Now is the time to think about what we have to do once again to fight it out on the world stage, we can no longer rely on just being technically better."

No. 10 Iwabuchi, whose sparkle up front remains vital to Nadeshiko, was in tears after the heartbreaking loss. The 28-year-old is another player determined to steer her country back to where they belong.

"I don't mind people having expectations of me, and shouldering them," she said. "We had a chance of going beyond the last eight, but this is where we are."

"I thought I was going to be done with the Olympics with this one, to be honest, but I missed out on something big. I'll push myself for the next three years."