Japan has begun surveying overseas arrivals about their COVID-19 vaccination status as it explores the feasibility of exempting those vaccinated abroad from the country's strict entry restrictions, government sources said Tuesday.

While Japan has decided to issue so-called vaccine passports to enable residents who have been fully inoculated against the novel coronavirus to travel internationally, it has yet to ease border measures for holders of such vaccine certificates issued abroad. 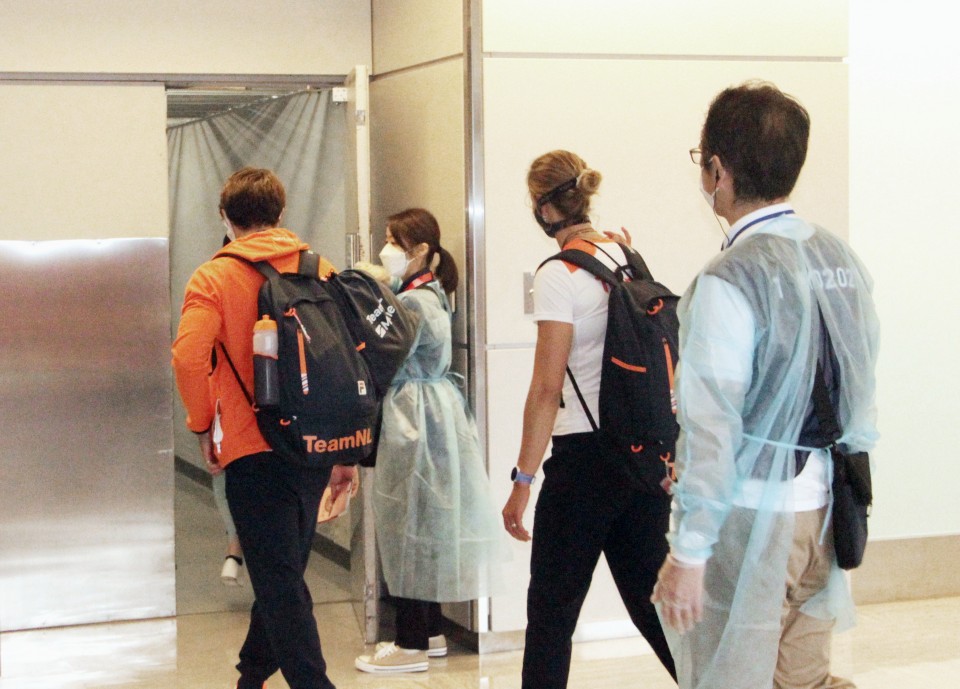 Foreign athletes competing in the Tokyo Olympics head to a Narita airport facility to wait for the results of a COVID-19 test conducted upon their arrival at the airport near Tokyo on July 7, 2021. (Kyodo) ==Kyodo

But with more than 10 different vaccines used around the world, a number of issues remain to be resolved, including whether those not approved by the Japanese government will be recognized.

As for Japan's vaccine passports, over 30 countries are expected to accept them, although the United States is unlikely to in the near future as rules vary between states, the sources said.

The government has also not begun talks on the passports in earnest with China and other countries that administer vaccines not yet approved in Japan. The Foreign Ministry plans to publish a list of some of the countries that have agreed to accept Japan's vaccine passports on its website Wednesday, according to the sources.

From next Monday, Japan will accept applications for the vaccine certificates, which will be issued free of charge.

As part of its feasibility study, the Ministry of Health, Labor and Welfare has been asking overseas arrivals quarantining at facilities to fill in voluntary questionnaires since early July, the sources said.

The questionnaires, based on self-reporting with no proof required, ask whether individuals have received any doses of COVID-19 vaccine, including those not currently approved in Japan, and if 14 days have elapsed since their last shot.

The government plans to use the responses to its survey in conjunction with other data, such as each vaccine's efficacy, to determine whether border measures can be eased in the future.

According to the Immigration Services Agency of Japan, around 43,000 Japanese nationals and 17,000 foreigners entered the country in June.

The need for arrivals to quarantine in accommodation facilities has become a huge burden for them and health authorities, with some officials of the opinion that it "cannot continue indefinitely."