Japan likely to stage Olympics without spectators at Tokyo venues

Japan is expected to stage the Olympics without spectators at venues in Tokyo due to a spike in coronavirus cases, senior government officials said Wednesday, roughly two weeks before the opening of the international sporting event.

The scenario is most likely as the government is set to declare another COVID-19 state of emergency in Tokyo, possibly until Aug. 22, a period exceeding the duration of the Olympics, according to high-ranking officials.

The Olympics from July 23 to Aug. 8 will take place in Tokyo and nine other prefectures, including Chiba and Saitama neighboring the capital, where the governors have urged that events after 9 p.m. be held behind closed doors.

If the decision is made to have no spectators at venues in Tokyo, the organizers may allow governors of nearby prefectures to choose whether to follow suit, a government official said.

Before the government's plan to put Tokyo under a fourth state of emergency emerged, Japanese Olympic organizers were leaning toward cutting the number of spectators to a maximum of 5,000.

In the face of another wave of infections, they have found it increasingly difficult to stage the Olympics under the current spectator policy that allows venues to be filled to 50 percent of capacity with a maximum of 10,000 people.

Prime Minister Yoshihide Suga on Wednesday stopped short of saying whether the spectator cap would be changed, reiterating that it was an issue to be addressed by the five parties, also including the Japanese organizing committee and the Tokyo metropolitan government.

When the five organizers decided on the current spectator policy in June, they agreed to consider further measures, including a no-spectator games in the event of a rapid change in the infection situation.

The current spectator ceiling was set on the assumption that the state of the pandemic would improve and Tokyo would no longer be under a quasi-state of emergency.

Seiko Hashimoto, president of the organizing committee, has said the organizers are "prepared" to go ahead without people in the stands if the government decides on such a policy after analyzing the infection situation.

Tokyo has experienced an increase in COVID-19 cases since Suga lifted the country's third state of emergency late last month and shifted to a less strict quasi-emergency. 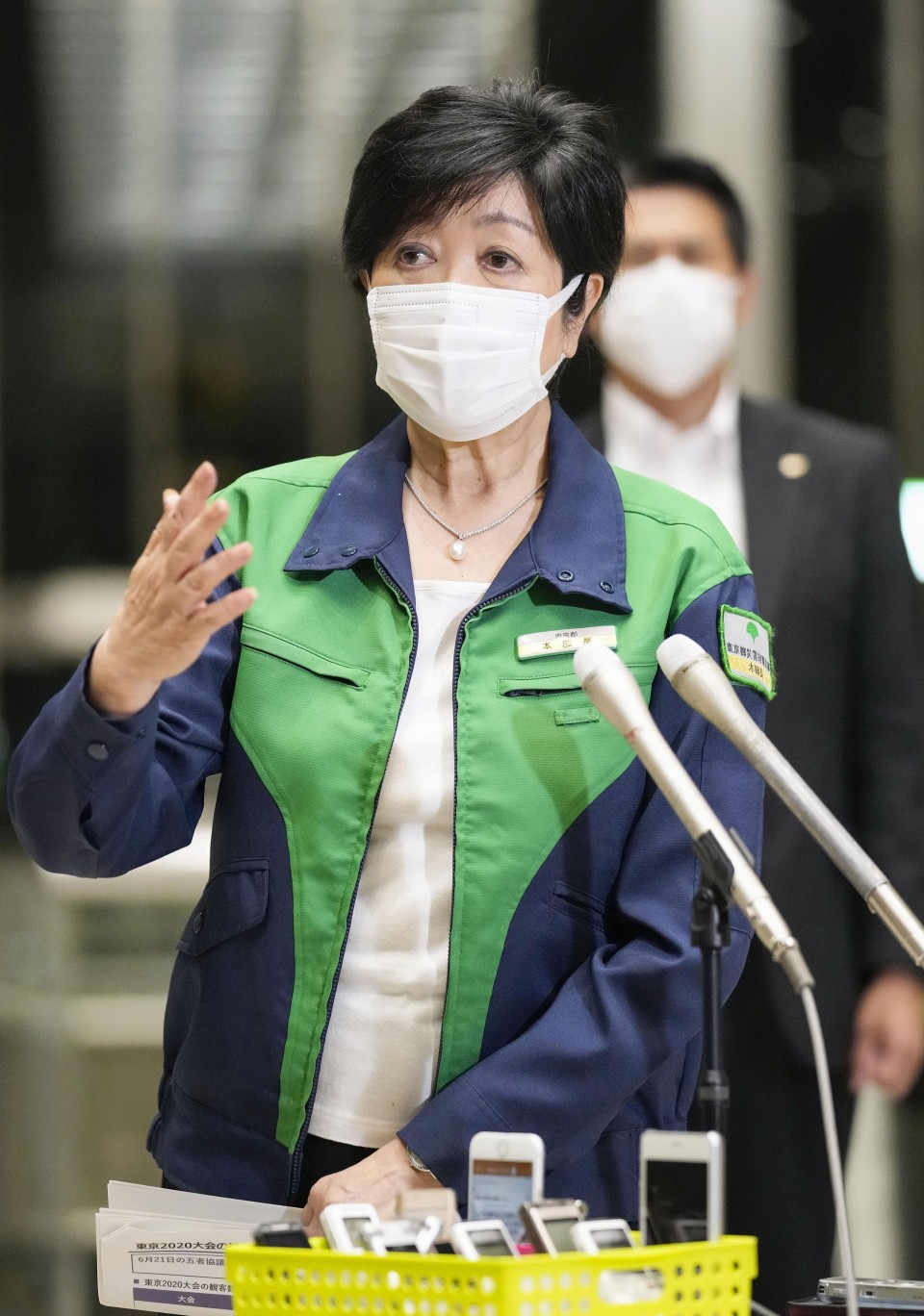 Tokyo Gov. Yuriko Koike told reporters that the situation is "very severe" and the metropolitan government will continue to work toward holding the games "safely" by implementing sufficient anti-virus measures.

Earlier in the day, one of the vice presidents of the Olympic organizing committee suggested it would be possible to hold a fresh ticket lottery even if the number of spectators at each venue was reduced to a maximum of 5,000.

Toshiaki Endo said in an online conference that the committee had "finally come to the point where it seems possible to have" a new ticket lottery.

Officials of the committee had said it would not be technically possible to organize another lottery for ticket holders due to the limited time until the Olympics begin.

The organizing body sold tickets for Olympic sessions, or time slots, before the Tokyo Games were postponed last year due to the coronavirus pandemic. The spectator policy applies for each time slot, and some venues will hold several sessions a day.

The organizing committee had pushed back the release of the ticket lottery results for the current cap to Saturday assuming that the government would extend the ongoing quasi-state of emergency.

Under the quasi-state emergency, the number of people allowed at sports and other big events is restricted to 50 percent of venue capacity with an upper limit of 5,000 people.