As luck would have it, the men's 100-kilogram judo champion at these Tokyo Olympics is a lone wolf.

In fact, Aaron Wolf, who claimed the gold medal for Japan in the men's second heaviest weight category, is known among his teammates for his sheer fortitude and marching to his own beat. 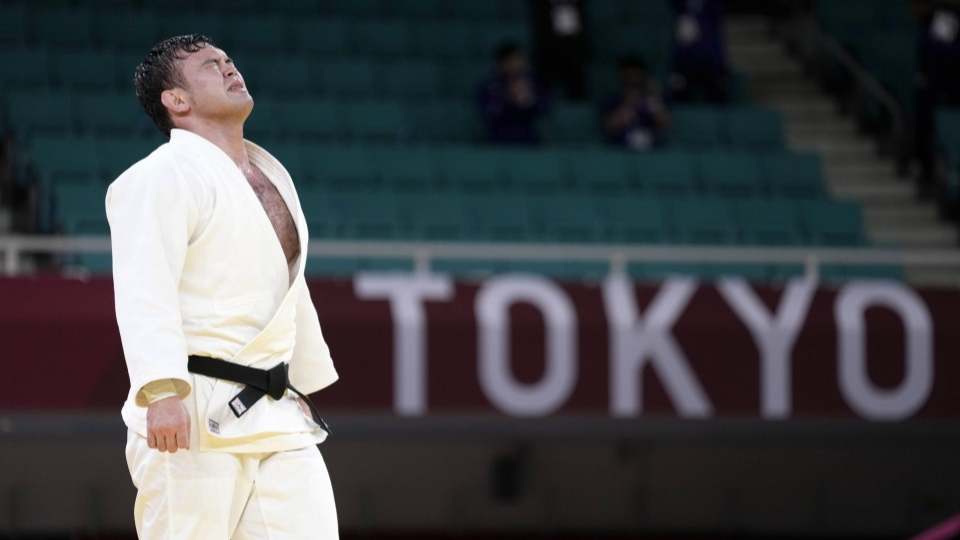 "I have reaped the rewards of everything I have done up till this point. It is deeply moving," Wolf said as he covered the tears streaming down his face after becoming the first judoka from Japan to win the 100 kg title since the 2000 Sydney Olympics.

During the final against South Korean Cho Gu Ham at Nippon Budokan that went into the golden score extra time, both fighters saw their stamina diminish as the battle wore on. But Wolf said he never felt he was in real danger.

"I had the confidence that no one had put in as much practice as I had. The closer a match becomes for me, the more my trademark abilities emerge," said Wolf, who scored an ippon with a mighty o-uchi-gari inner leg sweep of his opponent after 9 minutes and 35 seconds to claim victory.

Born to a Japanese mother and American father, Wolf grew up in Tokyo's "shitamachi," literally lower city often associated with the common people's culture before World War II. At the age of 6, he started practicing judo at the Kodokan, the headquarters of the worldwide judo community established by educator Jigoro Kano, the founder of judo, in 1882.

Although Wolf's name does not feature any kanji Chinese characters from the Japanese writing system, he says, "Even though my name doesn't include kanji, I think I am more Japanese than anyone."

During his time at Tokai University Urayasu High School in Chiba Prefecture, near Tokyo, Wolf's intensive practice sessions were legendary. He would train in the mornings, attend judo club practice in the evenings before going to work out at a Tokyo gym. 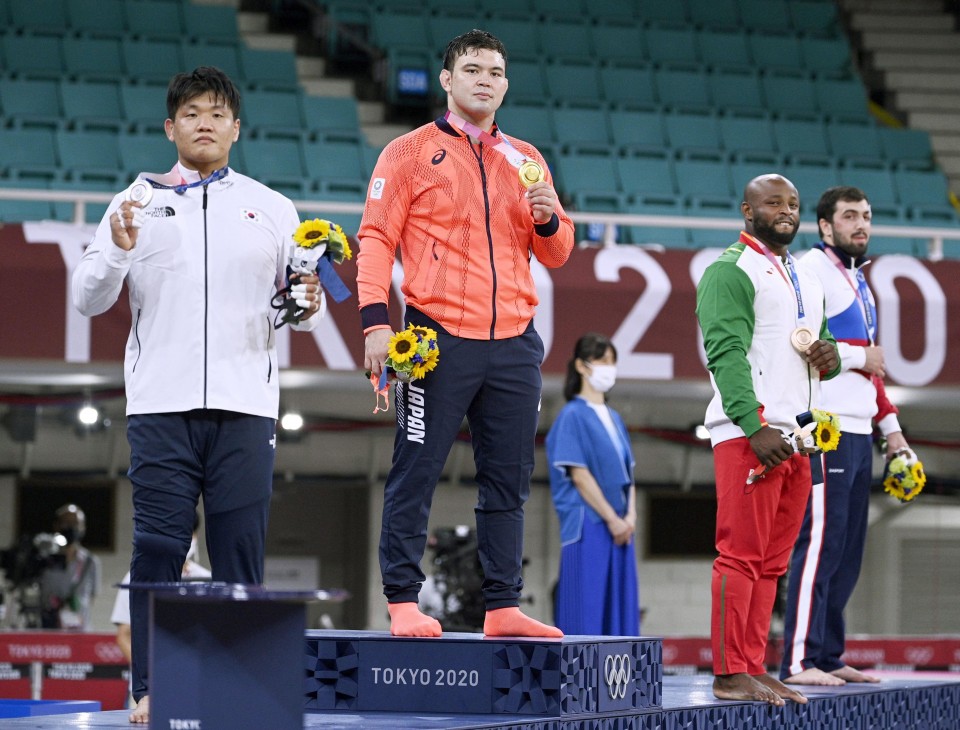 Aaron Wolf of Japan (2nd from L) is pictured with his gold medal in the men's judo 100-kilogram at the Tokyo Olympics at Nippon Budokan in Tokyo on July 29, 2021, alongside silver medalist Cho Gu Ham of South Korea (L) and bronze medalists Jorge Fonseca of Portugal (2nd from R) and Niiaz Iliasov of the Russian Olympic Committee. (Kyodo) ==Kyodo

His coach then, Toru Takeuchi, 61, currently a judo instructor at Tokai University, recalled of Wolf, "From the time he would start his warm-up exercises he would have this sparkle in his eyes and just be silently going at it."

That was when he began building the bedrock for what would eventually become the tenacious style of judo he is known for, where he utilizes his tremendous power and stamina to devastating effect.

Although there were days he had to endure upperclassmen taunting him, Wolf said, "I couldn't waste time getting revenge on them." He responded instead by training even harder.

"That (taunting) made me stronger," he said.

In his senior year at Tokai University, Wolf claimed his first world championship title but was handed a setback after having to undergo operations on both knees in the years that followed.

Despite the frustration of Wolf's repeated cycles of comebacks followed by injury layoffs, men's head coach Kosei Inoue said the youngster impressed him with his "exceptional cheerfulness" as he effortlessly progressed.

Wolf, who allows his hairy chest to be the butt of jokes, and demonstrates his fastidious nature when serving sashimi with his exceptional knife skills, is loved by all who know him.

In an essay from the summer of his second year in junior high school, he wrote, "The dream I envision must exist as a result of continuous diligent effort. I believe that my efforts will not betray me. Ten years from now, I want to be a person who achieves each and every small goal."

The lone wolf has finally reached the mountain top. "Dreams are big, and goals are those things within reach. There is no skipping a grade. Slowly and steadily, I've climbed to the top of those stairs," Wolf said.

The boy, who has never realized his aspiration of competing in national competitions, now embodies the spirit of a strong judoka -- both in body and mind -- and has blossomed into his own.