Three rounds into the Tokyo Olympic surfing competition, Japan's Kanoa Igarashi appears to be a man on a mission.

Familiar with the Olympic waves of Tsurigasaki Beach in Ichinomiya, Chiba, where his father Tsutomu surfed back in the 1980s and Kanoa himself as a boy, the 23-year-old has a chance to eclipse all his past accolades by topping the Olympic podium under the flag of his parent's home nation. 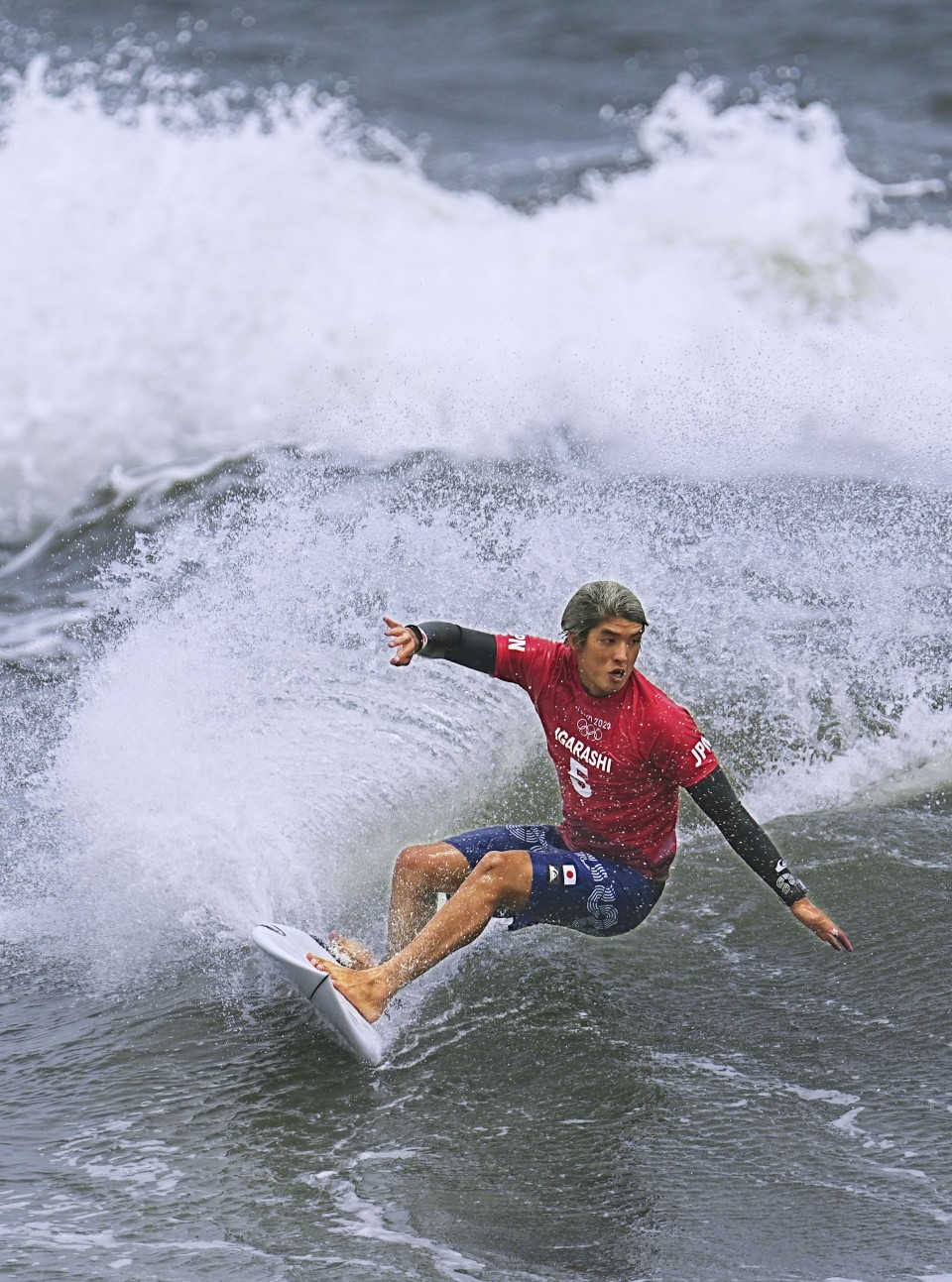 Kanoa Igarashi of Japan competes in the third round of the men's surfing event at the Tokyo Olympics on July 26, 2021, at Tsurigasaki Surfing Beach in Ichinomiya, Chiba Prefecture, eastern Japan. (Kyodo) ==Kyodo

"That first wave was really special. I woke up with a lot of pressure, (there's) four years leading up to this first wave. But as soon as I got that first wave, it kind of all just melted away and that turned into energy and motivation for me," he said after topping his first-round heat on Sunday.

"Just walking down to the beach and taking the first few steps on the sand was definitely a moment where I kind of just connected with so many years ago -- I was surfing here with my dad, learning how to surf. It was a really emotional morning."

Raised in the sporting hotbed of Huntington Beach, California, Igarashi took to the water at 3 and went on to represent his birth country, the United States, before switching his allegiance in 2018 to Japan, where both his parents were born, ahead of the Olympics.

He became the first Japanese to win a World Surf League Championship Tour event in 2019, at the Corona Bali Protected. His sixth-place finish for the season all but secured his games berth, with a top-10 finish one requirement for qualification.

He needed to take part in the World Surfing Games to clinch it before the pandemic struck. The global health crisis did, nonetheless, give an unexpected respite for a top surfer who is constantly on the road.

"I've spent around the same amount of time in California and Portugal, relaxing rather than training," Igarashi said recently of the pandemic-hit 2020.

"2020 was supposed to be a wonderful year, but the coronavirus gave me a bit of time to relax, and I feel maybe it was something I needed, too. A good resting time. But there were also preparations for 2021."

Igarashi eventually punched his Olympic ticket by taking part in the event in El Salvador where he went on to finish second, for the second straight time after the 2019 edition in Japan.

Igarashi also came third in the Jeep Surf Ranch Pro two weeks later, narrowly losing out in the semifinal to two Brazilians including the Olympic favorite Gabriel Medina who advanced to the quarterfinals on Monday where he will face Frenchman Michel Bourez.

Putting on a few kilograms in the lead-up to the games, Igarashi has added the ability to put more power through the board, something he can translate to his airs.

While comfortable pulling into giant barrels at some of the world's most well-known spots, he is also more than capable of getting the most out of Japan's typically smaller and less well-formed waves.

With two fairly comfortable heat wins on the large but wild typhoon-driven waves at Tsurigasaki Beach, the Japanese star appears to be peaking at the right time.

"Preparation remains crucial and I'll give it my best shot," Igarashi said before the games. "I don't use energy for things I cannot control. I'm concentrating well on myself."