The Tokyo metropolitan government reported 593 new coronavirus cases Tuesday, exceeding the number logged a week earlier for the 17th straight day, amid a rebound of infections with just over two weeks to go until the start of the Olympics.

Tokyo's seven-day rolling average of infections per day came to 602.3, above the 500 mark that indicates Stage 4, the worst level, on the government's four-point scale for the pandemic's severity. 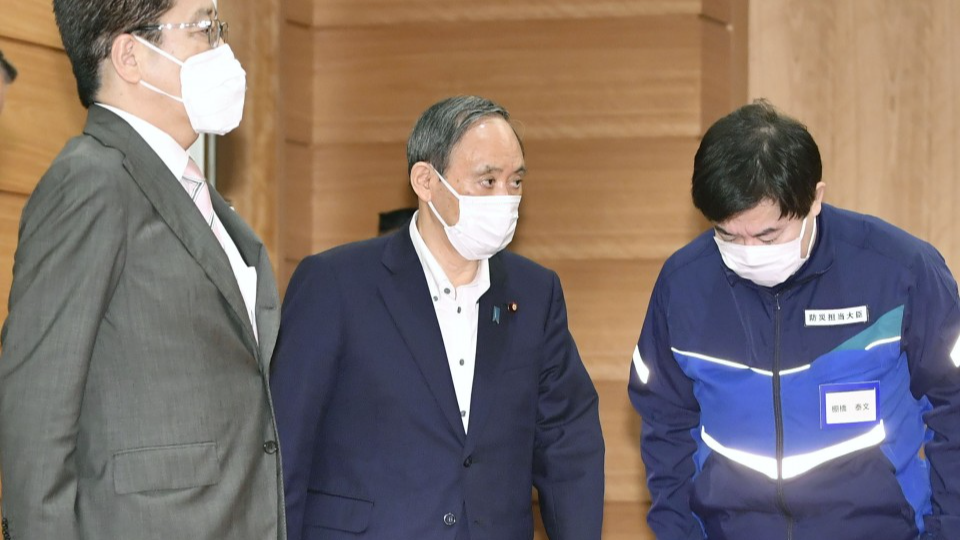 Japanese Prime Minister Yoshihide Suga (C) is pictured before attending a Cabinet meeting at his office in Tokyo on July 6, 2021, wearing a face mask amid the coronavirus pandemic. (Kyodo) ==Kyodo

The recent uptick comes as the government is leaning toward maintaining the quasi-state of emergency covering the Tokyo metropolitan area beyond its initially scheduled end next Sunday.

The resurgence has been fanning public skepticism about holding the Tokyo Olympics. The organizing committee has insisted the games will begin on July 23 after a one-year postponement due to the pandemic.

Meanwhile, Taro Kono, the minister in charge of the country's vaccination efforts, told a press conference Tuesday that the government plans to dispatch a total of 11.7 million doses of Pfizer Inc.'s vaccine to municipalities across the country every two weeks from July to the end of September.

"Municipalities will be able to plan their vaccination programs in advance," Kono said, without providing a breakdown of the shipments planned for each area.

The remaining 36.3 million Moderna vaccine doses are expected to arrive in Japan from July to the end of September, he added.

Facing criticism for Japan's slow vaccine rollout, the government has been ramping up efforts to finish inoculating all eligible people in Japan who wish to receive shots by November.