Local authorities say an estimated 54,000 cubic meters of soil which had been brought to a mountainside by a real estate management firm exacerbated the massive mudslide on July 3 in Atami, Shizuoka Prefecture, resulting in the death of nine people. 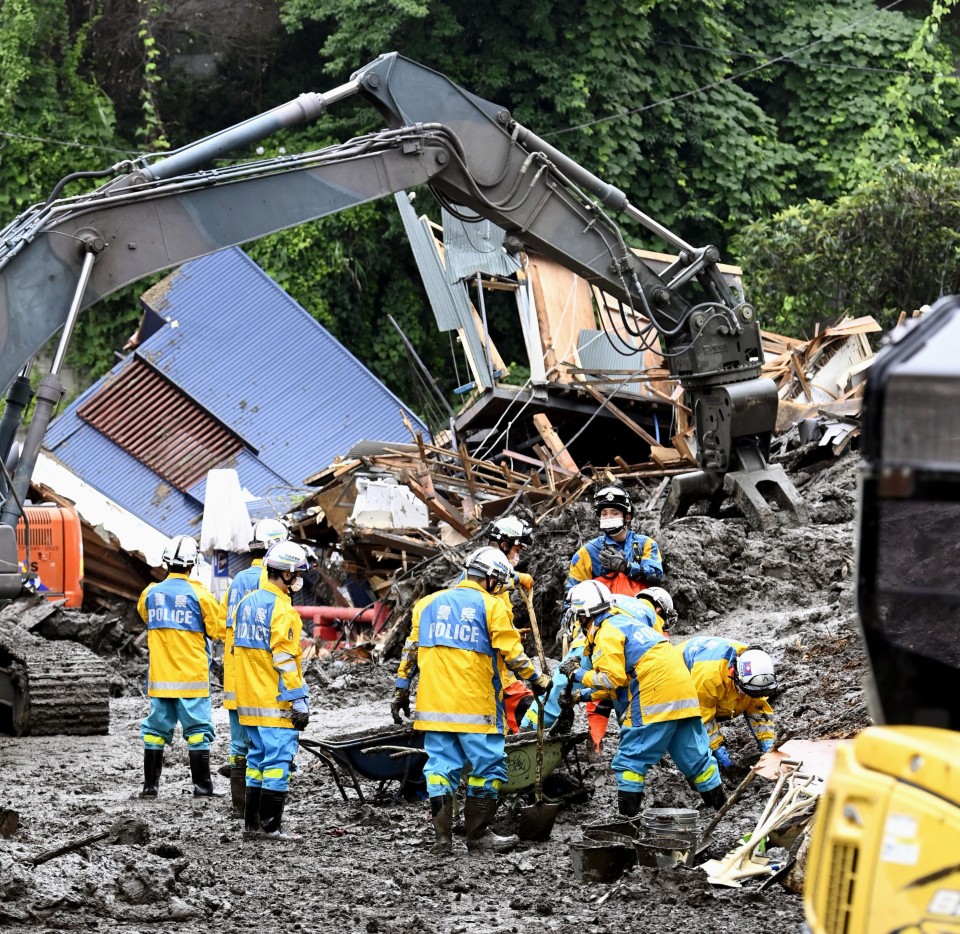 Some 56,000 cubic meters of soil in total, mostly the soil left by the company, collapsed into a nearby river, traveling a distance of about 2 kilometers. Around 130 houses and buildings were destroyed or damaged.

The real estate management firm based in nearby Odawara in Kanagawa Prefecture, which acquired the mountainside lot in 2006, brought in soil exceeding the amount it reported to the local authority and also mixed industrial waste with it, according to the Shizuoka prefectural government.

The now-liquidated company is also suspected of not installing drainage facilities at the site as required by a Shizuoka Prefecture ordinance, the prefectural government said.

The real estate firm had said in a 2009 report to the prefectural government that it planned to install an underground pipe as drainage but such a device was not confirmed in photos or other materials taken after the mudslide, according to Deputy Shizuoka Gov. Takashi Namba.

The firm was subject to multiple administrative directions by the prefectural and Atami city governments due to repeated inappropriate actions, the Shizuoka government said.

For instance, the company had reported in 2009 its plan to pile up soil at the lot to a height of 15 meters, but the actual height of the soil reached some 50 meters shortly before the mudslide occurred, according to the prefectural government.

The company also underreported the area of forests it cut down in the vicinity and was told by the prefectural government to restore it in 2007. 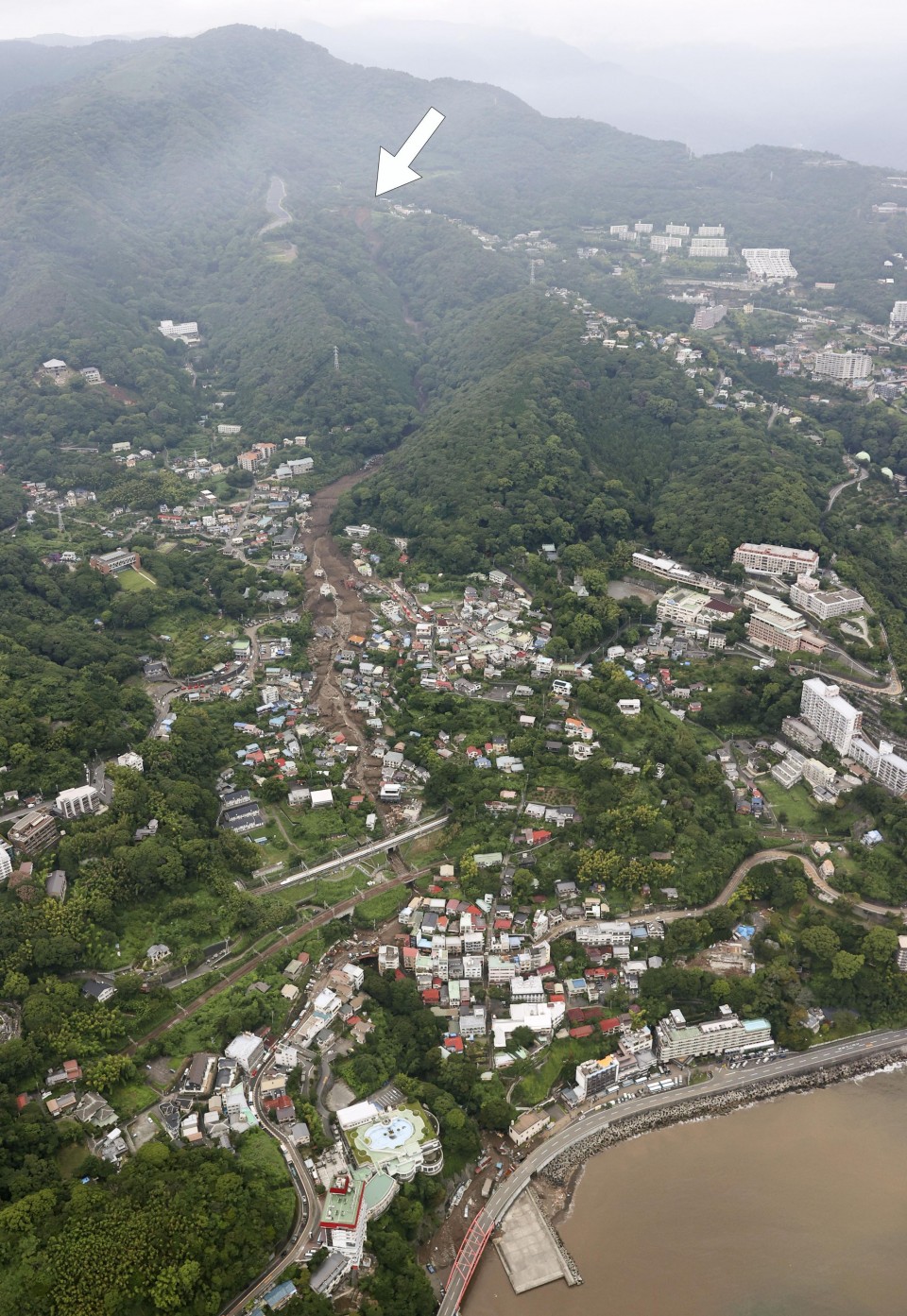 Photo taken from a Kyodo News helicopter on July 6, 2021, shows the site of a huge mudslide triggered by torrential rain in the Shizuoka Prefecture hot spring resort city of Atami, central Japan, with the arrow pointing to the approximate starting point. (Kyodo) ==Kyodo

The Geospatial Information Authority of Japan said soil at the site is estimated to have increased by some 56,000 cubic meters between 2009 and 2019 and that 85 percent, or about 48,000 cubic meters of the soil, may have flowed out in the latest mudslide.

The authority, which made the prediction using data from airborne laser surveys, said a site that used to be a valley in 2009 had been raised to a height of up to some 13 meters in 2019 due to the accumulation of soil.

Following the mudslide, the central government has moved to take steps to secure the safety of accumulated soil located nationwide, including discussing the creation of universal regulations. 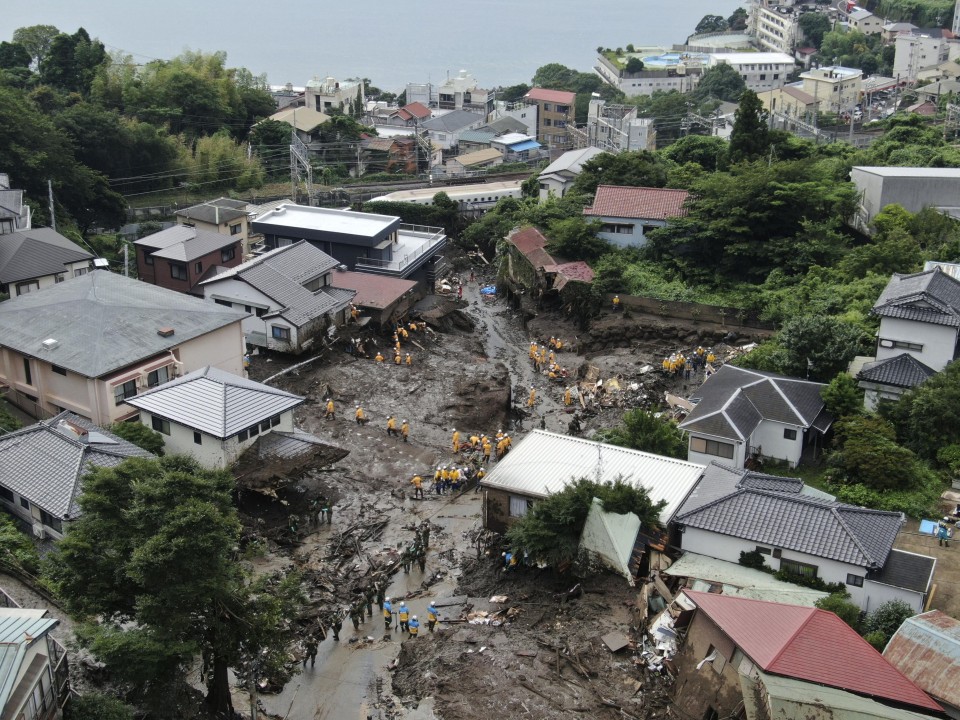 Local governments which have dealt with piled-up soil by ordinances have been calling on the central government to establish uniformed rules.

"We need to establish firm rules and make sure they are followed by operators," land minister Kazuyoshi Akaba said, noting that accumulated soil not regulated by law poses a "high risk."

Akaba said his ministry will discuss the matter with related government bodies including the forestry and environment ministries. The entities will also explore ways to inspect and reinforce land with accumulated soil in danger of collapse across the country.

Masato Koyama, professor at Shizuoka University Center for Integrated Research and Education of Natural Hazards, meanwhile, warned of a recurrence of mudslides as there still remains around 20,000 cubic meters of fragile soil accumulated at the site.

Koyama, who conducted an on-site investigation on Monday, said in his report that the soil which triggered the mudslide did not include volcanic rocks naturally seen in the area but consisted mainly of small stones mixed with sand, indicating it had been brought in from outside.

He also concluded that as there were no large volcanic rocks found in the disaster-hit areas, the mudslide derived solely from the accumulated soil.

Koyama estimated that some 55,000 cubic meters of the accumulated soil collapsed and caused the mudslide.

"I suspect that the accumulated soil collapsed due to an increase in underground water caused by heavy rain," the professor said.

Death toll from large mudslide in central Japan rises to 9