Japan's Mima Ito and Jun Mizutani battled back from the brink to edge Petrissa Solja and Patrick Franziska of Germany in a seven-game thriller and reach the semifinals of the table tennis mixed doubles at the Tokyo Olympics on Sunday. 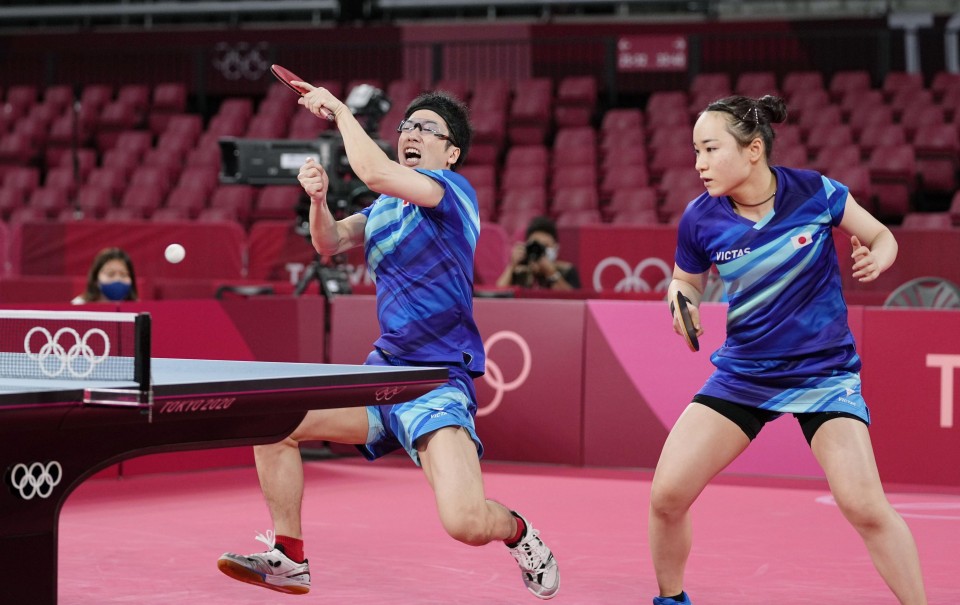 Japan's Mima Ito (R) and Jun Mizutani battle against Germany in the table tennis quarterfinals in the Tokyo Metropolitan Gymnasium on July 25, 2021. (Kyodo)

"It was an incredibly tense match, even though there was no medal riding on it," said Mizutani. "We simply refused to give up and that is what has led us to this victory."

Ito said, "I really feel we have got this win because of Mizutani. He has such determination and kept giving me words and looks of encouragement. I'm a winner because I have been paired with him."

Ito, 20, and Mizutani, 32, are among the medal favorites in the mixed doubles, added to the table tennis program for the first time at the Tokyo Olympics.

Next up in the semifinals are Taiwan's third seeds Lin Yun-ju and Cheng I-ching.

"Now we are into the stage where medals are at stake. We have worked really hard and are going for the gold medal so obviously we want to win the next match," said Mizutani.

Ito said, "Of course we have a medal on our minds. If you win, a medal will follow, so we just want to get the job done and enjoy ourselves."

Both Ito and Mizutani are also representing host Japan in the team events here.