Yuto Horigome proved Sunday that he will prevail no matter how intense the pressure, the 22-year-old Tokyoite shaking off sub-par runs in the Olympic skateboard street final to lay down the four must-land tricks that won him gold.

His fourth attempt, a nollie backside 270 tailslide, garnered the highest score of the competition, a 9.50, and cemented a lead the Japanese would not surrender. 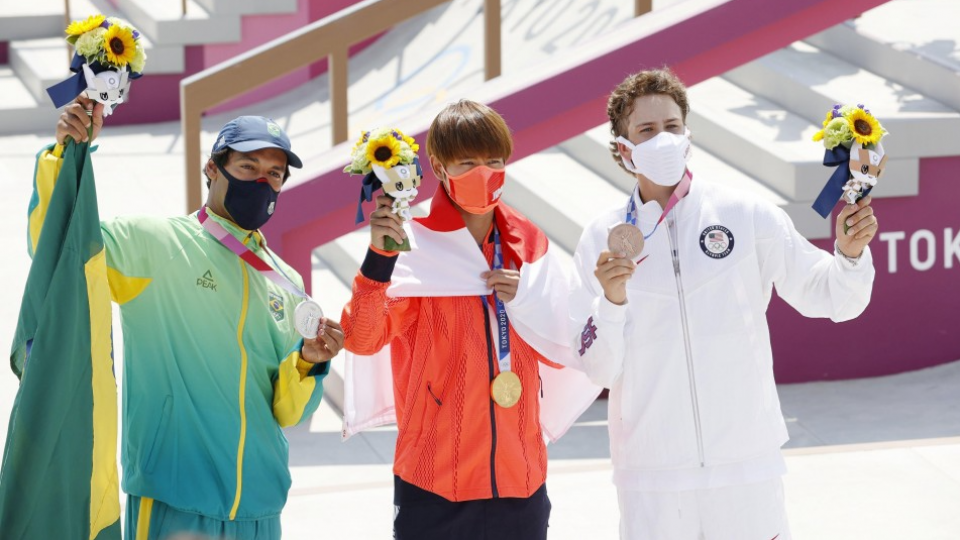 "Even after the fourth trick, I was not sure about the medal," said Horigome. "And I thought landing the fifth (trick) was necessary for the gold medal. So I was very focused on the fifth trick, rather than the medal."

As if to prove just how huge the Japanese skater's performance was, Nyjah Huston, the most famous and highly-decorated athlete in the competition, could not rebound from a similarly challenging start.

The former child prodigy did not score highly in his two runs, but unlike Horigome, he could not make up the difference in the single-trick part of the competition, failing on each of his last four attempts and finishing seventh.

"Coming into it I was really excited, also really nervous. I've never felt so much pressure, from representing your country, too," the 26-year-old said.

"I'm human. We're skateboarders. You don't go out there and win every single time. What we're doing out there is way too technical for that."

The chance that Huston let slip, Horigome grasped and became the first Olympic skateboard champion in history, finishing ahead of silver medalist Kelvin Hoefler from Brazil and American Jagger Eaton in third.

Fresh-faced and looking even younger than his years, Horigome showed a resolve built by someone who has been "doing skateboarding as my life." The hours, days and months spent on the streets of east Tokyo, in the same municipal ward as the Ariake Urban Sports Park skateboard venue, made him what he is.

"The Olympics for me, because it is held in Koto Ward where I was born, for me, it is very meaningful, very inspiring," the now Los Angeles-based skater said at the post-event press conference.

Horigome recalled the times spent skating at Komatsugawa Park on the banks of the Arakawa River in the Japanese capital's east.

"There I started to skateboard, my father was a skater in the past and we went to Komatsugawa Park. I followed him there and that is how I got interested in skating," he said.

"I am so happy, because this is my home town. Actually, my house is like 20 minutes from here. I am Koto-born, and I'm just so happy to win the gold medal here."