FEATURE: Huston set on using Olympics to take skateboarding to next level

Nyjah Huston is the most recognizable face in the world of skateboarding, and the American wants to use his profile to broaden the sport's audience when it debuts at the Tokyo Olympics.

Huston, with four world championships and more than 10 X Games titles to his name, will appear in the men's street event on July 25, bringing his unconventional look and fan following into the staid world of the Olympics. 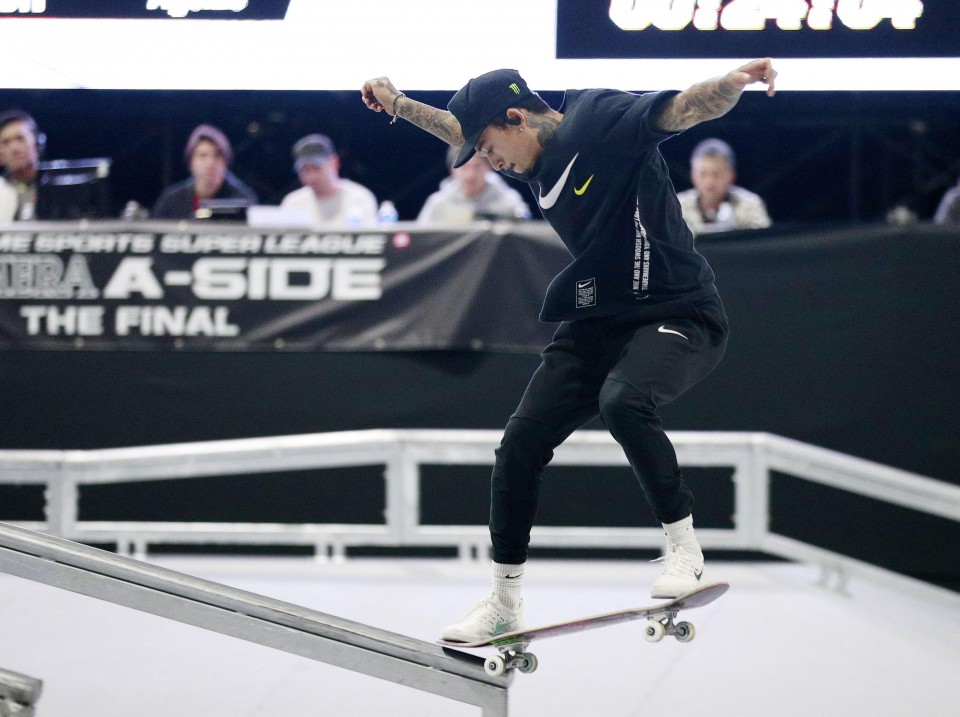 "I'm stoked that it's finally coming to the biggest stage, especially because skateboarding is already so worldwide," the 26-year-old Huston told Kyodo News in an email interview.

Widely regarded as the greatest contest skater of all time, Huston established himself on the scene as a precocious, dreadlocked child who competed with the world's best at the X Games as an 11-year-old in 2006.

With his paternal grandmother hailing from Japan, a part of his lineage that inspired a Chinese kanji wrist tattoo meaning "passion" in Japanese, Huston has said skating in Tokyo will be like competing at home.

He is one of 80 men's and women's skaters from over 20 countries who will roll into history at Ariake Urban Sports Park in Tokyo's waterfront area.

"Skateboarding is so fun to watch as far as competitions go," Huston said. "So I'm excited for more people to get exposed to it, and hopefully fall in love with it, which will bring a whole new group of fans to the sport."

Skateboarding and three other sports will be staged at the Olympics for the first time, following proposals by the Japanese organizing committee to introduce youth-oriented sports in hopes of attracting a more age-diverse audience.

Sport climbing, which will be contested in an event combining the three disciplines of speed, bouldering and lead, surfing at Tsurigasaki Surfing Beach in Ichinomiya, southeast of Tokyo, and the Okinawa-born martial art of karate join skateboarding on the Olympic bill. 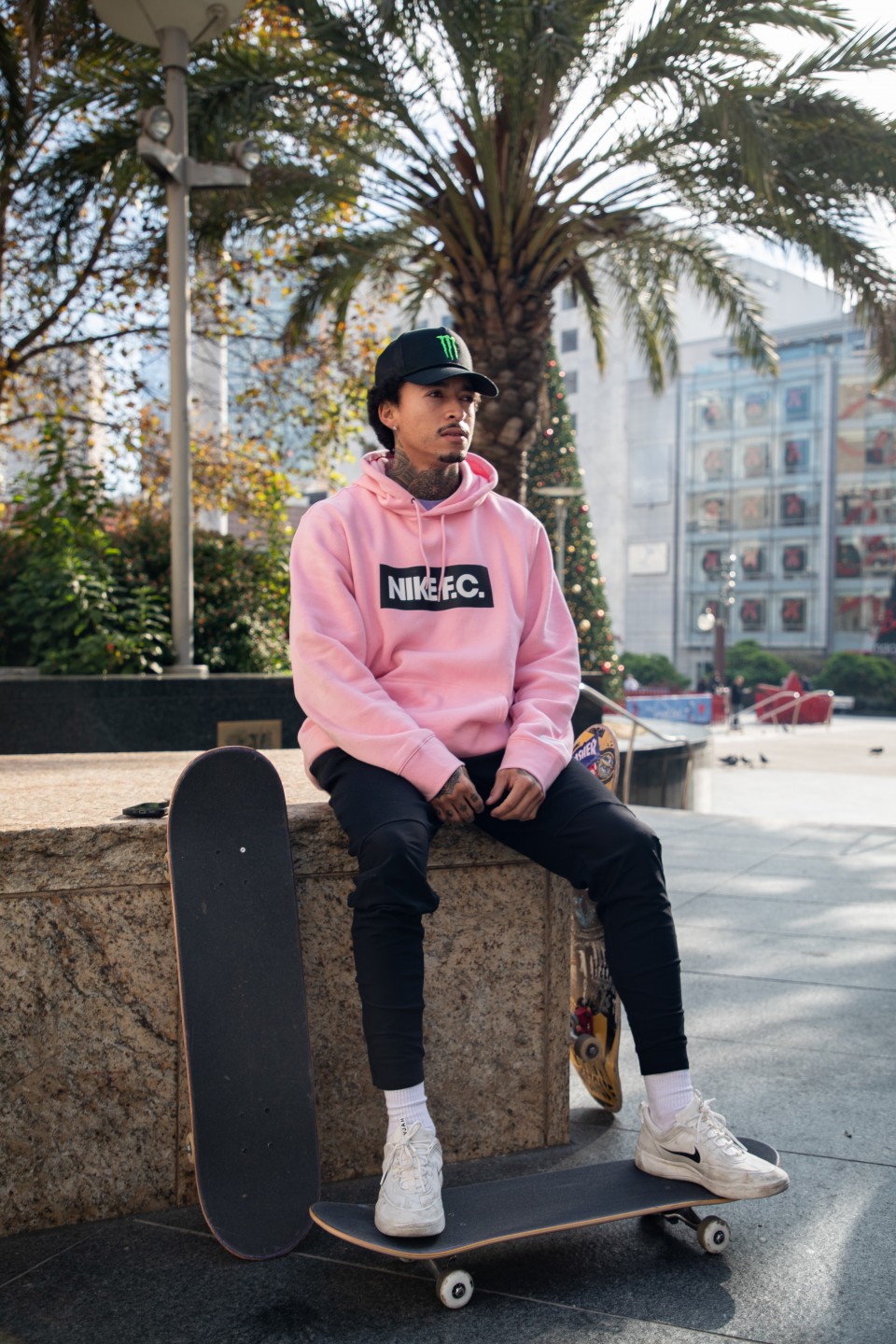 Karate is the only one that will fall off the Olympic program at the 2024 Paris Games, to be replaced by break dancing.

The Olympic skateboarding competition will consist of street and park events for both genders on courses larger than those at the world championships.

In the street competition, athletes execute tricks such as flips and grinds on a course replicating a street environment with stairs, curbs and rails.

The park event will see skaters compete on a course inspired by the early drained swimming pools used by the sport's pioneers, with different types of half-pipes, ramps and spines.

Guided by his father, Huston took up skateboarding at 5 and was first featured in the skateboarding bible, Thrasher Magazine, when he was 9, announcing his arrival and his promise for the future.

No longer dreadlocked, but now covered in tattoos, Huston thrills his roughly 4.7 million Instagram followers with videos of him jumping massive gaps, grinding rails and landing spectacular tricks down flights of stairs.

With endorsements from major companies like Nike Inc., Huston, who also launched his brand recently -- Disorder Skateboards -- is among the highest-paid skaters in the world.

"He has three or four basic tricks and he determines which to use depending on the course very well, making his tricks look very versatile," Japan coach Daisuke Hayakawa said of Huston.

Huston is expected to face tough competition from Japan's Yuto Horigome, whom the American describes as a "very consistent" skater with "a lot of unique tricks to bring to the table."

At the street world championships that concluded last month in Rome, Huston was unable to defend his title after finishing just a point behind Horigome.

Huston scored higher than Horigome in both runs, the portions of the competition that see athletes build a performance over 45 seconds at a time, with a highlight flip to backside boardslide closing out the second.

But the American fell on three of his five single-trick attempts, allowing the Japanese to overhaul him for gold. Horigome's teammate, 19-year-old Sora Shirai, picked up the bronze and earned a spot at the Olympics.

While the coronavirus outbreak disrupted the sports calendar, Huston, who resides at Laguna Beach in California, said he was able to "stay on point" at a private skate park, even when competitions were shelved.

"The main thing was not just making sure I'm staying safe with COVID, but also not getting injured to make sure I'm at my best," he said.

Due to restrictions in place to prevent the spread of the coronavirus, the competition will lack the atmosphere normally provided by boisterous skateboard crowds.

Olympic organizers recently agreed to ban spectators in most of the venues after the Japanese government declared a state of emergency beyond the duration of the Olympics, making these games almost strictly a TV event. The organizers had already agreed in March to bar fans traveling from abroad.

"I'd be lying if I said I wasn't bummed -- I really feed off that crowd energy. Not just without the crowd, but without family or the homies either," Huston said.

"But I know the most important thing is to keep everyone safe and it really is such an honor just to be there."