Maya Yoshida scored the opener and Ritsu Doan hit a brace as Japan's under-24s claimed a 3-1 win over their Honduran counterparts on Monday in the first of two warm-up games ahead of the Tokyo Olympics.

With three established overage players called up in the shape of captain Yoshida, Hiroki Sakai and Wataru Endo to shore up an already promising-looking young side, Japan dominated their Olympic rivals for large spells with a flowing display and can head into another warm-up with Spain on Saturday with a good degree of confidence. 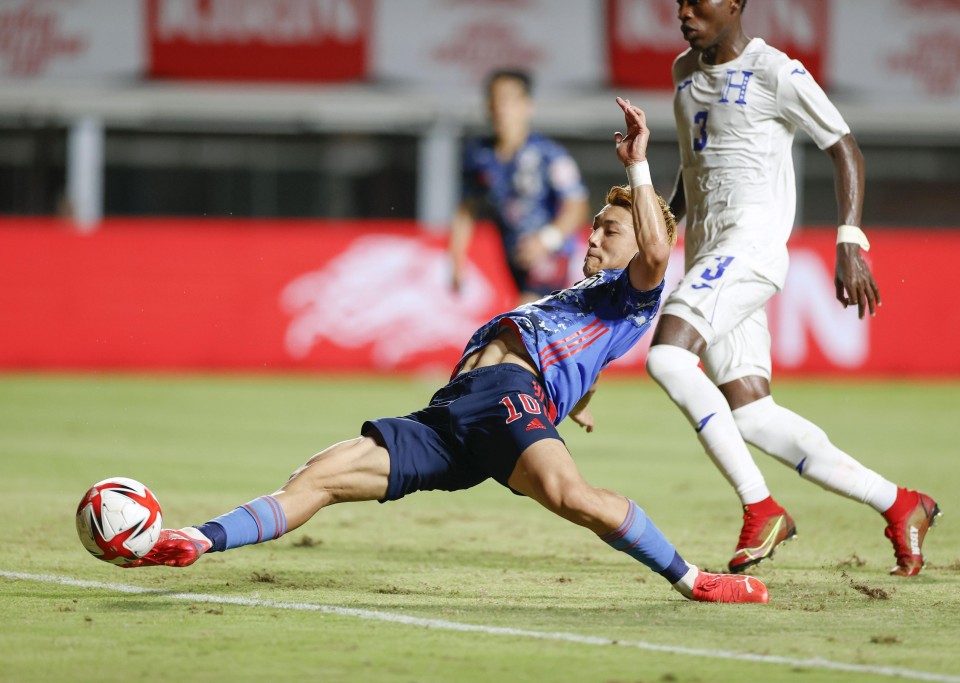 Ritsu Doan (L) scores Japan's third goal against Honduras during the second half of a warm-up match for the Tokyo Olympics on July 12, 2021, at Yodoko Sakura Stadium in Osaka. (Kyodo) ==Kyodo

"We have to raise our quality further but given the conditions our players are in, we either recovered or raised our match fitness and also managed to share the concept of a team," said manager Hajime Moriyasu, pleased with the outing in which some players were playing a proper game for the first time in around a month.

Moriyasu started three left-footed attacking midfielders in Takefusa Kubo, Doan and Koji Miyoshi and their exchanges in the first half, aided by the double pivot of Endo and Ao Tanaka, had many on the edge of their seats at Yodoko Sakura Stadium in Osaka where 5,000 were in attendance.

Sakai headed narrowly wide, Kubo had a penalty appeal turned down contesting his shot struck a defender's hand and Miyoshi hit the post following a fast cross from Kubo all before the 11th-minute opener.

Kubo floated in a free-kick from the right to find Yoshida, the center-back sneaking behind an opposing defender and effortlessly steering home with the outside of his right foot.

Displaying slick passing moves but without an end product, Japan eventually added their second in a fine manner in the 40th minute. 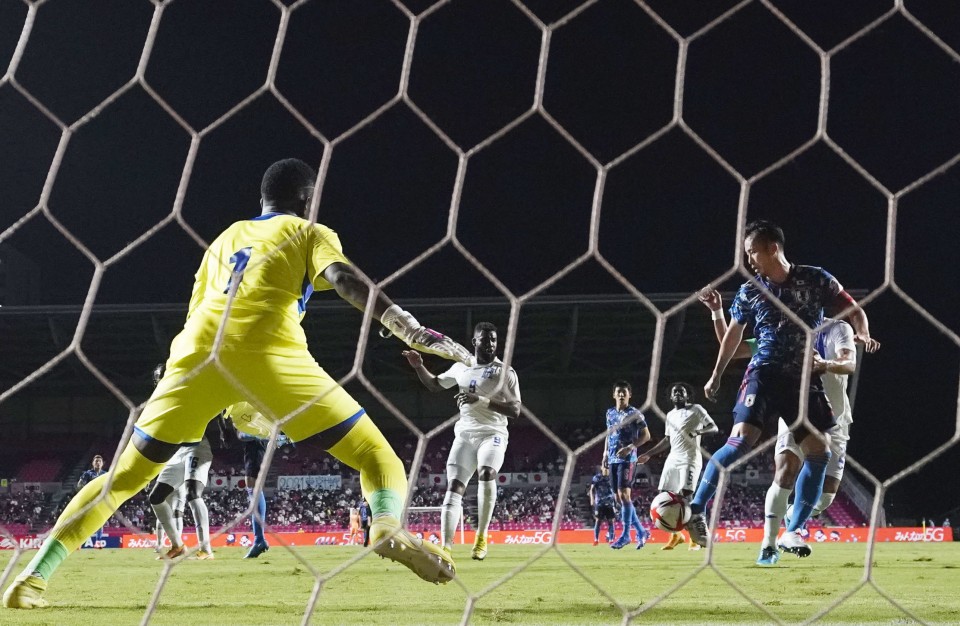 Maya Yoshida (front R) of Japan opens the scoring against Honduras during the first half of a warm-up match for the Tokyo Olympics on July 12, 2021, at Yodoko Sakura Stadium in Osaka. (Kyodo) ==Kyodo

Center-back Takehiro Tomiyasu won possession before sending a low cross from the left, Miyoshi let it go past him and forward Daichi Hayashi held off a defender to tee up Doan, who sent a first-time effort into the bottom left corner with his weaker right foot.

Chances after the break became less clear-cut for Japan with Honduras making five early changes and the visitors scored with their first real chance of the game in the 65th minute.

Rigoberto Rivas ran behind the Japanese defense to pick up a pass and although his toe-poke was denied by keeper Kosei Tani, Tomiyasu inadvertently kicked the ball into his own net.

But Doan made sure of the win with another goal five minutes from the end of the half. It was another well-worked goal as Endo played substitute Yuki Soma down the left, whose low cross was slid home.

"Both goals were first-time efforts and I'm thankful for my teammates," Doan said. "It's important we scored early. We gave away the momentum in the second half although we had a good first half, so we need to fix that."

Japan face South Africa, Mexico and France in Group A at the Olympics, while Honduras are in Group B with New Zealand, South Korea and Romania.