An annual gigantic maze made of about 10,000 sunflowers grown by students on their high school's farm was completed recently in Marugame of Kagawa Prefecture. However, like last year, it was not opened to the public due to the ongoing coronavirus pandemic.

Instead, kindergarteners and other children from the neighborhood were invited and enjoyed a summer "adventure" of finding their way around walls of sunflowers, some of which were over 2 meters high. 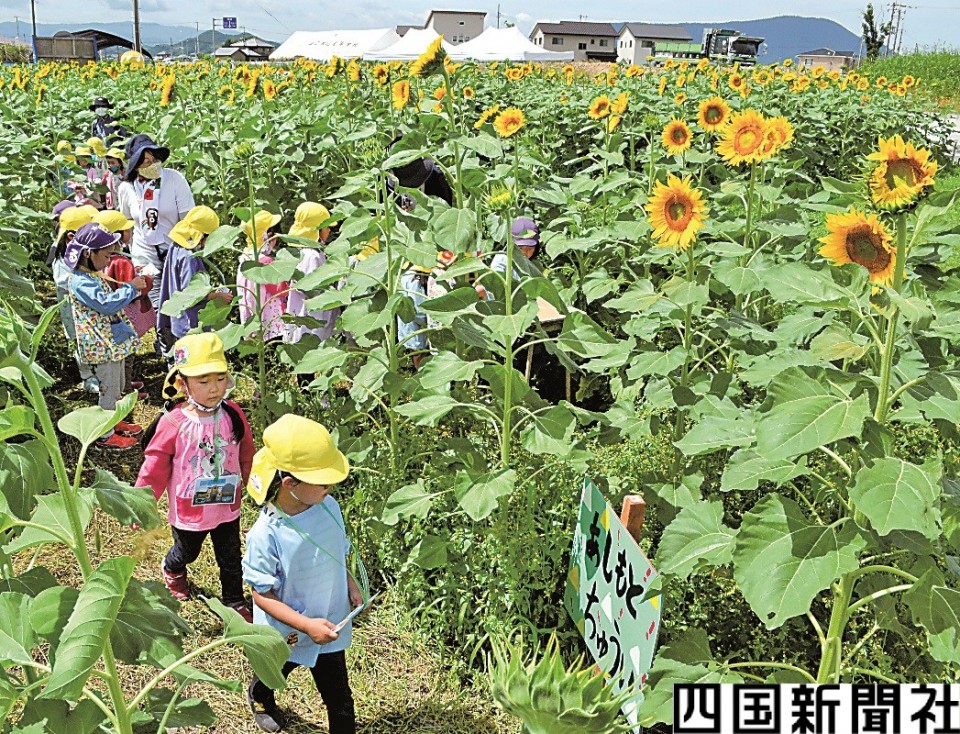 Children navigate their way through a giant maze made of 10,000 sunflowers in Marugame.

The sunflower maze has been planted every year since 2000 as part of Hanzan High School's efforts to engage with the local community. This year, 163 first-year students sowed sunflower seeds at the 25-acre farm in early May and proceeded with preparations such as weeding and making signboards for the maze by hand.

As the rainy season started earlier than usual, there had been concerns about the growth of the flowers this year. Fortunately, the sunflowers turned out to grow relatively well both in terms of height and the size of the flowers, according to the school.

While navigating their way through the giant maze, the children collected word stamps at various checkpoints, which spell out "sunflower maze" in Japanese when completed. Children beamed with joy as they reached the goal, some exclaiming that they had fun and that the sunflowers were beautiful.

Due to the coronavirus situation, however, activities for the high school students to directly interact with the children were canceled for the second year in a row. "I am relieved that the sunflowers turned out well, but it is such a pity that we couldn't give the students and children the chance to interact with each other," the high school teacher in charge of the project said.