Mungyeong, a small city of 71,000 in the central part of South Korea, welcomed about 80,000 visitors last year thanks to the efforts of a group of intrepid young entrepreneurs, attracting attention as a successful model for combating rural depopulation.

On a sunny spring day, in the retro-looking cafe, many visitors could be seen soaking up the relaxed atmosphere. Some were attentively viewing wall displays showing the history of how the cafe transformed from what was long ago a Korean sake brewery. 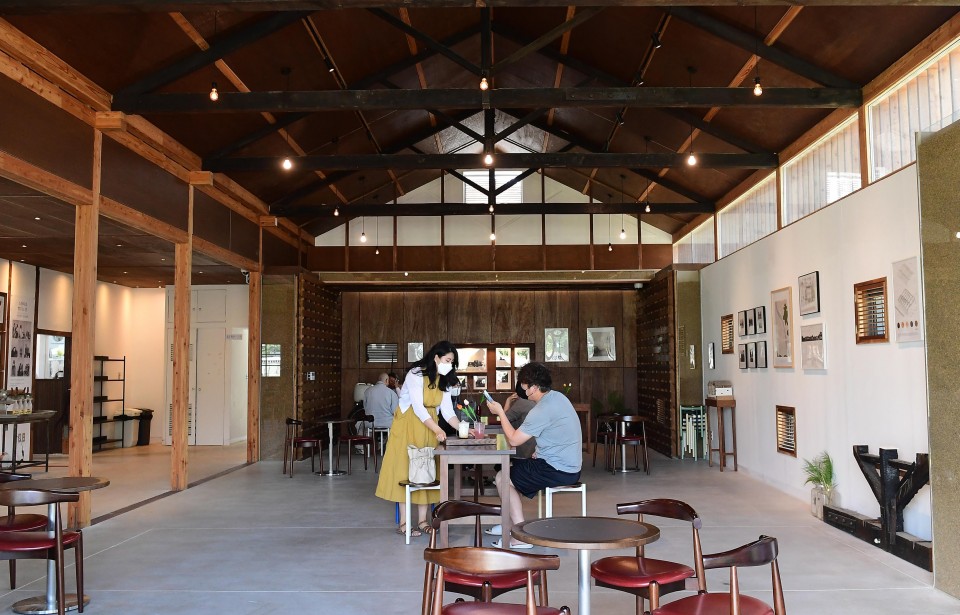 Photo taken in May 2021 shows a cafe transformed from a Korean sake brewery in Mungyeong, South Korea. (Kyodo)

"I first got to know about this place from the media. After hearing that it was renovated from an old brewery, I felt like visiting," said 49-year-old Jang Mu Kyung from Wonju, a city 120 kilometers away, as she took her eyes off the wall.

"The rustic scenery around the cafe is also very beautiful. I might come here again with my friends for sketching," Jang said with a smile, adding that she would never have come to visit Mungyeong if it were not for the cafe.

Behind such success is RE:PLACE, a startup company established by five young adults and led by 28-year-old Do Won Woo.

Along with 12 employees, he works as a "local creator" whose main job is to revitalize small cities that are in danger of disappearing due to decreasing population, just like Mungyeong, located about 150 km south of Seoul in North Gyeongsang Province.

"At first I was not thinking about reviving small cities or anything. I was just searching for something that I myself could be fully involved in and bring actual changes, rather than making a living as a typical office worker," said Do, recalling the time that he decided to leave his job at an insurance company.

With that in mind, he started persuading his close friends and his wife about moving to the countryside.

"I focused on the fact that there are too many old people and very few young ones in such areas and, therefore, we'd be of great help in reviving such cities if we decided to work there," he said.

Do and his recruits applied for a program under which the provincial government offered subsidies for young people willing to move to a depopulating city and start their own business there.

As a result, they received a total of 150 million won ($132,170) from the local government and opted to move to Mungyeong as its people and city officials were very friendly and willing to help them adjust easily.

In addition to the cafe, they also run a guesthouse that serves as a cafe in the daytime. It was renovated from an old and abandoned hanok, a Korean traditional-style house. 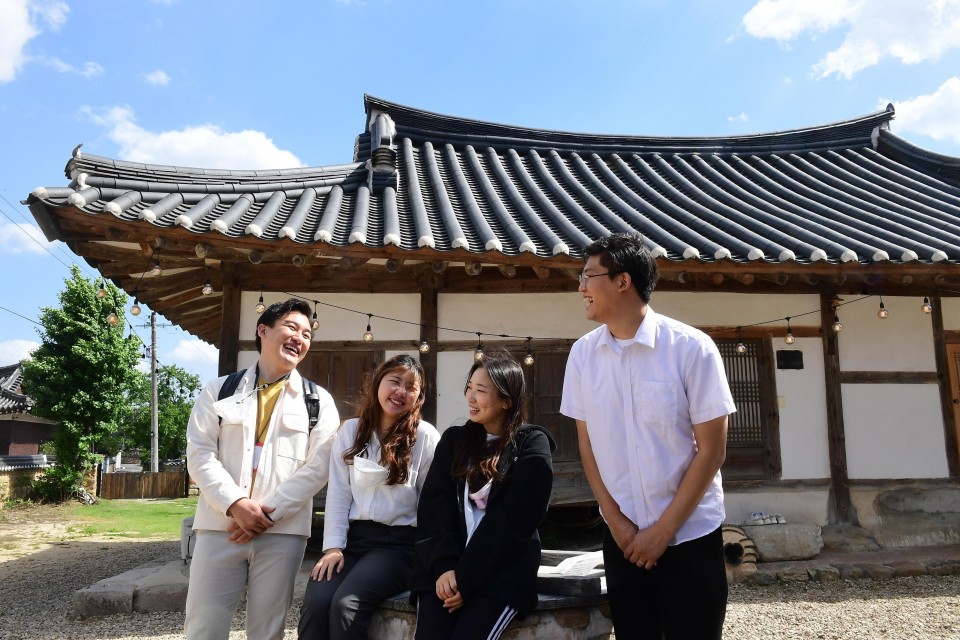 Do Won Woo (far L) and other members of startup company RE:PLACE are pictured in front of a cafe renovated from hanok, a Korean traditional-style house, in May 2021 in Mungyeong, South Korea. (Kyodo)

With the food, beverages and desserts available in both places, they try to use locally produced ingredients as much as possible, which is one of the main reasons that Do thinks they could become a huge success.

"Since (Mungyeong) is a city on a countryside, there are many different types of seasonal fruits like strawberries, apricots, persimmons in autumn, and watermelons in summer, and we only use those produced locally," Do said, explaining how his cafes and local farmers have formed mutually beneficial relationships.

After such facts became widely known, not only visitors from outside of the town, but also more and more locals started coming. Hwang Ji Sun, a 55-year-old Mungyeong resident, said that it was her first time to visit the cafe.

"I appreciate everyone for coming all the way to this part of the city," said Hwang, adding that it would be a good chance to let more people know about the local ingredients unique to Mungyeong.

In the 1970s, more than 200,000 people lived in Mungyeong as it had one of the largest coal mines in South Korea. But from the 1990s, when the last coal mine was closed, the population kept decreasing to reach the current level of about 70,000. Some predicted it may disappear in a few decades.

In South Korea, many small cities share the same problems as Mungyeong such as a declining and aging population, as more than half of the country's population is concentrated in Seoul and its surrounding areas.

The central government has been working hard to encourage young people to move to rural areas, and recently, over 460,000 people did so over a year, according to data collected by Agriculture, Food, and Rural Affairs Ministry.

A Mungyeong employment and economy department official said it is encouraging to see an increase in the number of tourists thanks to the efforts of young people like the members of RE:PLACE.

Do, however, believes that his company's goal should go beyond attracting tourists and help make young workers from big cities become "local creators" like himself in small cities scattered around the nation.

And that is one of the main reasons he decided to work together with H2O Hospitality, a company that provides general accommodation management for more than 50 hotels, ryokans, and guest houses in seven different cities in South Korea.

The company entered the Japanese market in 2017, and even worked with Rakuten, Japan's largest ecommerce company, in renovating old accommodations in depopulated cities near Tokyo, just like RE:PLACE did with abandoned hanoks in Mungyeong.

"We had similar goals and we were perfect partners for each other as RE:PLACE had little experience in running large-sized accommodations, while H2O had no experience in renovating hanoks," said Lee Woong Hee, the CEO of H2O Hospitality.

Their first project will be carried out in Yeongyang, a county of only 16,000 people that is also located in North Gyeongsang Province.

"I thought if we succeed even in this smallest county in Korea, we could send out some messages to society. Once the job of local creators gets to be known widely to the public, better human resources would gather, resulting in more benefits," Do said, exuding hope and optimism for the future.

Besides the project with H2O Hospitality, RE:PLACE came up with Mungyeong tour packages, which are now being sold at various tourism platforms in South Korea.

"We are literally doing everything we can to let more people know about this city and come visit," the CEO said.

"I feel so sorry that not many people know how beautiful Mungyeong is."