U.S. Secretary of State Antony Blinken, at an online meeting with his ASEAN peers on Wednesday, reiterated Washington's position that it will not accept China's unlawful maritime claims in the South China Sea, according to the State Department.

Blinken also expressed deep concern about a military coup that occurred in Myanmar earlier this year, and called for ASEAN to take coordinated action for the cessation of violence and return to civilian rule in the member country. 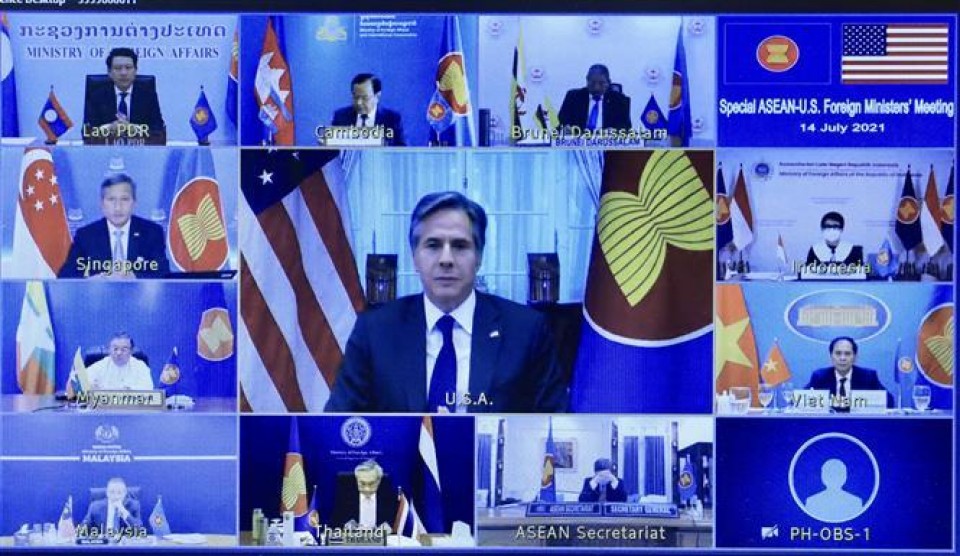 U.S. Secretary of State Antony Blinken (C) is pictured in an online meeting with his ASEAN peers on July 14, 2021. (VNA/Kyodo)

The remarks came during the first foreign ministers meeting between the United States and the 10-member Association of Southeast Asian Nations under the administration of U.S. President Joe Biden.

High on the agenda were the political crisis in Myanmar, the response to COVID-19 and disputes in the South China Sea, where China and its neighbors have overlapping territorial claims and where it has militarized artificial islands.

Blinken was quoted by an ASEAN source as saying the United States is "seriously concerned by recent developments" in the South China Sea as China's use of its maritime militia to coerce other claimant states has "escalated tensions."

On junta-ruled Myanmar, he pledged that the United States would continue to cooperate with other countries to take strong actions against the military regime until it reverses course, releases political detainees and restores democracy.

ASEAN, he was quoted as saying, "must take immediate action to hold the military accountable to the five-point consensus plan from which the junta has already tried to block and to back away."

ASEAN leaders came up with the plan at a special meeting in April during which they called for an immediate halt to violence in Myanmar and agreed to send a special envoy to the country, but not much progress has been made.

Myanmar's junta-appointed foreign minister, Wunna Maung Lwin, replied to Blinken's remarks by saying that his government is doing its best to implement what was agreed to at the ASEAN summit and that there has been some "relief" in the situation in his country.

Indonesian Foreign Minister Retno Marsudi said at the meeting, "It is now a critical time where the five-point consensus must be immediately implemented," according to a statement from her ministry.

The envisaged envoy would try to mediate in the dialogue process between various parties in the country, where pro-democracy forces were ousted from power in the Feb. 1 coup, with civilian leader Aung San Suu Kyi put under house arrest.

The U.S.-ASEAN meeting also comes amid an increasingly assertive China, with the Biden administration framing the U.S.-China rivalry as a fight between democratic and authoritarian governments.

Blinken was quoted as saying that the United States is not asking anybody to choose between them but instead to promote accountability, especially when it comes to China's human rights abuses, its draconian national security legislation in Hong Kong and what he termed genocide and crimes against humanity in its far-western Xinjiang region.

The United States has been seeking to boost ties with ASEAN in addition to pursuing collaboration among four major democracies in the Indo-Pacific region -- the United States, Japan, Australia and India -- in a grouping known as the Quad.

China, for its part, has provided ASEAN countries with homemade vaccines and held an in-person foreign ministers meeting with ASEAN in the southwestern city of Chongqing in early June.

The virtual U.S.-ASEAN foreign ministers meeting was scheduled to be held on May 25, but it was postponed at the last minute because Blinken, who was heading to the Middle East at the time, could not participate due to a communication failure on the plane he was on.

U.S. steps up warning against businesses tied to China's Xinjiang