Facing the urgent need to take stronger anti-virus measures, the government of Prime Minister Yoshihide Suga will add Chiba, Kanagawa, Saitama and Osaka prefectures to areas under the emergency, which already covers Tokyo and Okinawa, from next Monday through Aug. 31. 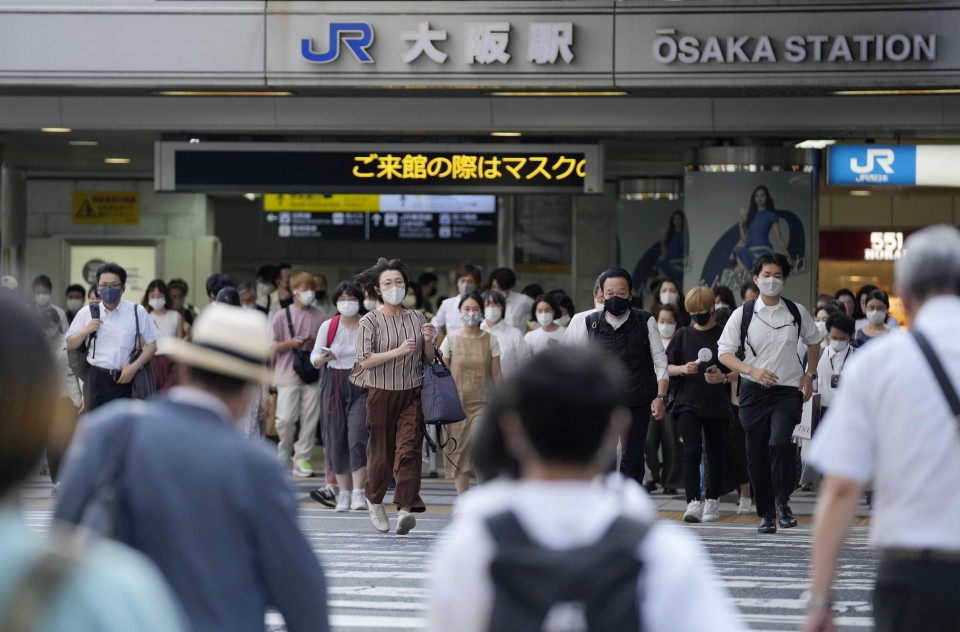 The COVID-19 emergency initially declared for Tokyo and Okinawa through Aug. 22 will also be extended until the end of the month. The new period overlaps with the Olympics, which started last week and will run through Aug. 8, and also partly covers the Paralympics period starting Aug. 24.

"Infections are spreading in the Tokyo metropolitan area, the Kansai region (in western Japan) and many other areas at an unprecedented speed," Suga told a press conference after the decision on the emergency expansion, which got approval from experts in infectious diseases and other fields earlier in the day.

He also said that the threat of a viral surge is particularly prominent among younger generations, asking people to refrain from nonessential outings, including visiting their hometowns during the summer vacation period, to curb infections.

The government is also set to put five prefectures -- Hokkaido, Ishikawa, Kyoto, Hyogo and Fukuoka -- under a quasi-state of emergency, which carries fewer restrictions on business activity than the state of emergency, from Monday to the end of August.

Japan's daily total of COVID-19 cases hit a record 10,743 on Friday, topping 10,000 for the second straight day. Tokyo confirmed 3,300 infections after reporting record figures for three days in a row through Thursday, with Kanagawa and Chiba seeing the highest-ever daily figures of 1,418 and 753, respectively.

The surge in infections comes amid the spread of the virus's highly contagious Delta variant, first detected in India, which Suga said now makes up over 70 percent of daily infections in Tokyo and is "a big factor" behind the recent spike in infections.

The number of people going out has only fallen mildly, with the capital currently hosting the Olympics and many in Tokyo tired of restrictions under the virus emergency.

"Other than the Delta variant, I think one of the reasons for the spread of the virus this time is that people have gotten used to the coronavirus and emergency declarations," Shigeru Omi, Suga's top COVID-19 adviser, said at the press conference.

"A sense of crisis is not easily conveyed in the midst of the Olympics and their summer vacations," Omi added.

Suga denied a link between the sports event and surging COVID-19 cases in the capital, stressing that adequate countermeasures are in place to prevent infections from spreading from athletes and staff visiting for the games.

Under the state of emergency, restaurants and bars serving alcohol or offering karaoke services are asked to shut during the period while the government provides money for compliance. Those not serving liquor are requested to close at 8 p.m.

Amid repeated virus emergencies, however, some experts point out that dining establishments are increasingly neglecting the government's requests for them to temporarily close or refrain from serving alcohol, making the virus measures less effective.

Asked about the necessity of legislation that would enable the government to impose hard lockdowns like many major cities abroad did last year, Suga said he believes such a measure would "not fit" Japanese people, while Omi said it is natural to discuss the step if the current request-based approaches do not work well.

Yasutoshi Nishimura, minister in charge of Japan's COVID-19 response, told experts Friday that the government will ask dining establishments in areas under a quasi-emergency to stop providing alcohol in principle.

Only when the number of infections indicates a downward trend may provision of alcohol be allowed in areas under a quasi-emergency with a governor's approval, according to the government's basic policy presented to the experts.

"If the number of people who test positive stays at a high level, it will lead to a shortage of hospital beds," he said at a meeting of health experts.

While the government has repeatedly said vaccination is the key to bringing the pandemic under control, Japan's vaccine rollout has lagged behind other developed nations, with slightly over a quarter of its population having received two shots.

To turn the situation around, the government will aim to have over 40 percent of the public fully vaccinated by late August, Suga added.

Public dissatisfaction with the government's coronavirus response could add pressure on Suga ahead of a general election later this year.