Works from an art exhibition that has repeatedly sparked controversy for its purported "anti-Japan" message in featuring a statue symbolizing wartime "comfort women" have been put on display at a gallery in central Japan, organizers of the event said Tuesday.

The Sakae municipal gallery in Nagoya will show the statue of a girl in traditional Korean dress symbolizing women who worked in wartime Japanese military brothels as well as two other pieces from the exhibition until July 11.

The exhibition, titled "After 'Freedom of Expression?'", initially opened at the Aichi Triennale 2019 but was forced to close over security concerns amid a flood of threats and complaints. 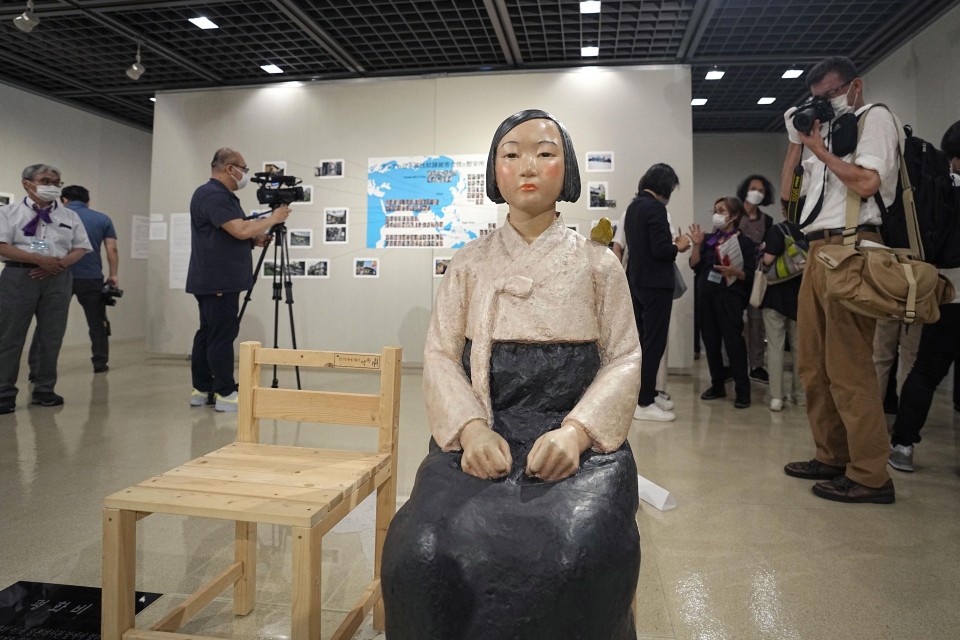 Photo taken on July 6, 2021, shows a statue symbolizing wartime "comfort women" put on display at an art exhibition at the Sakae municipal gallery in Nagoya. (Kyodo)

A similar exhibition that was set to open in Tokyo last month was postponed indefinitely due to disruption caused by protestors in vehicles using loudspeakers.

The exhibition is also unlikely to open in Osaka later this month as scheduled after a prefectural facility revoked permission for organizers to use it as a venue.

Nagoya city officials said that they have requested organizers increase security and will work with police to hold the event.

The other two works on display include a film featuring a scene where an image of Emperor Hirohito, the grandfather of the current emperor, is burned to ashes.

According to the city officials, protestors gathered in front of the facility over the weekend, criticizing the city for allowing use of the venue.

Nagoya Mayor Takashi Kawamura, who objected to the exhibition, had refused to pay a part of the festival's expenses in 2019, leading to a legal battle.

The incident had also triggered a campaign demanding the dismissal of Aichi Gov. Hideaki Omura, who headed the festival's steering committee.

Japan's relations with South Korea remain strained due to a feud over compensation for wartime laborers and former comfort women.