For Japanese gymnast Hikaru Mori, a performance at the Tokyo Olympic Games could have been another highlight of her up-and-down trampoline career that began on a supermarket rooftop garden 18 years ago.

The reigning world champion, however, crashed out in the women's qualifying round on Friday after an uncharacteristic flop denied her a place in the final and, eventually, a first trampoline medal for Japan. 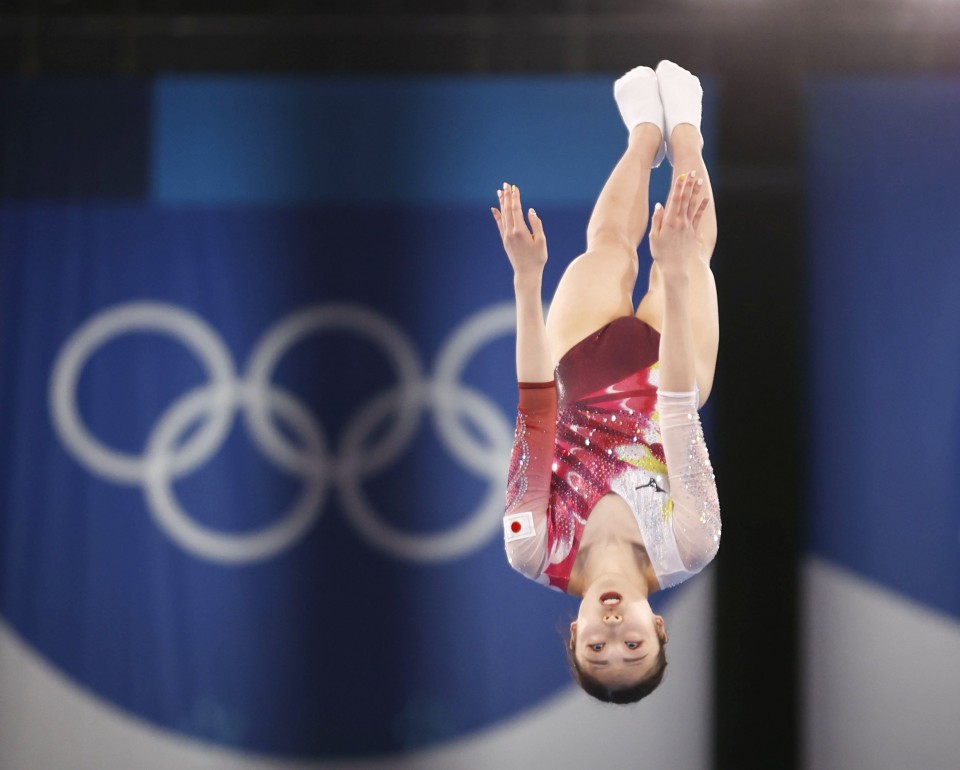 Hikaru Mori of Japan performs in the qualification round of the women's trampoline gymnastics of the Tokyo Olympics on July 30, 2021, at Ariake Gymnastics Centre in Tokyo. (Kyodo)

Mori said she had no regrets over her early exit, but also admitted to cracking under pressure, the weight of being a gold-medal favorite being too much to bear.

"I felt immense pressure to meet the expectations to win a medal and it was getting harder and harder to deal with," said Mori.

The 22-year-old's athletic roots go back to when she was four, the age at which she was introduced to a trampoline at a rooftop garden play area of a local supermarket in Tokyo.

Her mother Mika happily paid 200 yen (about $1.8) for seven minutes of bounce time for her daughter and older twin brothers to get active and release pent-up energy.

She had no idea she was raising a future Olympian.

"I kept telling her to jump continuously because I wanted to wear her out," the 51-year-old said, laughing.

Enchanted by the therapeutic floating sensation above the trampoline, Hikaru begged her mother for more time and eventually joined a trampoline club in her neighborhood with her brothers.

Her future was forever changed by this one small decision.

The feeling of pure joy when she bounced on a trampoline, giggling and carefree, slowly faded as her recreational obsession evolved into one of intense competition.

She moved to her current training base of Ishikawa Prefecture in central Japan in the middle of her freshman year of high school, when she switched to a powerhouse school in the gymnastics discipline, searching for an ideal student-athlete atmosphere.

Her mother chose to move with her instead of having her daughter live in a dorm, and spent the next five and a half years creating a cozy home away from home for Hikaru and helping her unwind after long, stressful days.

The move paid off when Hiraku booked a berth in Tokyo 2020 by climbing onto the top of the podium at the 2019 world championship, becoming the first Japanese to capture a world crown -- either in the men's or women's competition -- at age 20.

That accomplishment fueled expectations for her winning a gold medal at the Tokyo Olympics. Yet she was caught up in the aftermath of the coronavirus pandemic, including the games' postponement that forced a change to her training schedule and her mental conditions.

In a post-competition interview at Ariake Gymnastics Centre on Friday, Hikaru admitted that her confidence has taken a serious knock as a result of her mental health issues.

Hikaru confessed she came under mounting pressure to the point where she could not jump up well enough to perform decently and even went as far as confiding in her coach of her intention to quit.

Despite her failure, her longtime club coach Mayumi Kuramochi was supportive and empathetic, especially with mental health of athletes the talk of the Tokyo Olympics.

"I just want to tell her she has already accomplished a lot just by qualifying for the Olympics," Kuramochi said shortly after Mori's Olympic quest ended -- just for now.