Tokyo reported a record 2,848 daily coronavirus infections on Tuesday, days after the Olympics kicked off in the capital as health experts warned that the worst is yet to come.

The figure exceeded the previous record of 2,520 cases logged on Jan. 7 as the host city of the world's biggest sporting event since the pandemic broke out remains under a state of emergency following a surge in infections.

The nationwide tally of daily infections climbed to 7,629, the most since Jan. 9 driven by the more contagious Delta variant of the virus and nearing its all-time high of about 8,000, with the number of new COVID-19 cases also rising rapidly in prefectures neighboring Tokyo such as Kanagawa and Chiba. 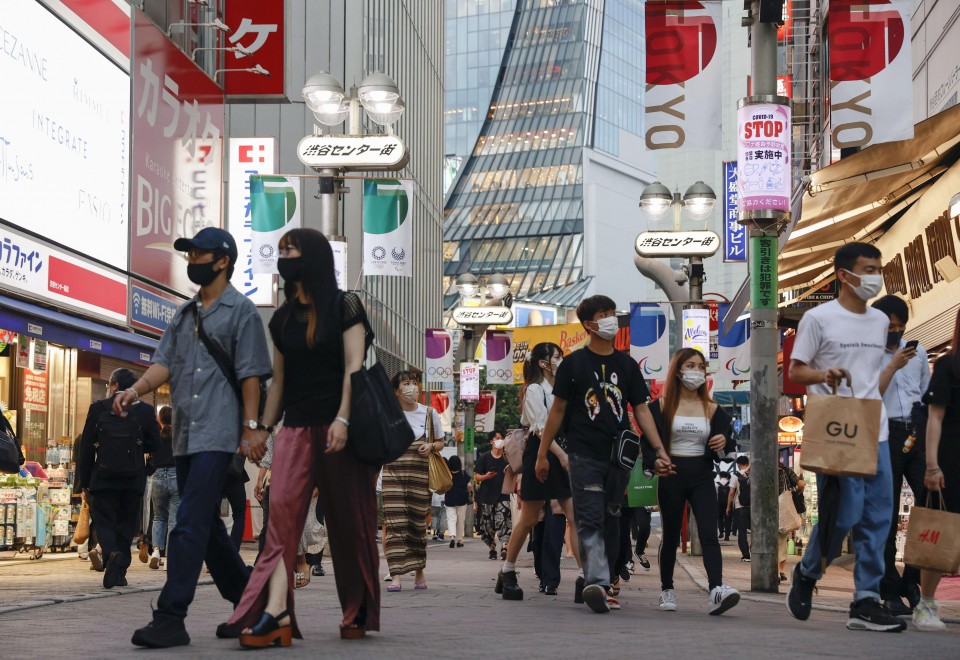 Prime Minister Yoshihide Suga called on the public to avoid leaving home where possible and watch the Tokyo Olympics on TV, while denying that canceling the games that opened Friday midway through is an option.

"More people in their 40s and 50s are being hospitalized, and the Delta strain is spreading quickly," Suga told the press after meeting with members of his Cabinet including health minister Norihisa Tamura and Yasutoshi Nishimura, minister in charge of the COVID-19 response.

"We are maintaining a strong sense of caution as we work with local governments to curb infections," he said, adding that authorities are analyzing the movement of people during a four-day holiday in Japan from Thursday.

The capital's seven-day rolling average of cases has risen to 1,762.6 per day, up 49.4 percent from the previous week. Compared with Tuesday last week, the daily figure increased 1,461.

Public opinion is split over whether the Olympics, delayed for one year due to the coronavirus pandemic, should be taking place amid a global health crisis.

Amid skepticism over safety, games organizers have banned spectators at almost all venues in and outside Tokyo as a COVID-19 precaution.

Infectious disease experts have warned that the Delta variant of the virus first detected in India could cause a sharp rise in infections that will peak around Aug. 3, five days before the Olympics wrap up.

At the current pace, coronavirus cases will climb to between 3,000 and 3,500 per day, said Satoshi Hori, a professor of infectious disease control at Juntendo University.

The Japanese government has imposed a fourth state of emergency in Tokyo from July 12 through Aug. 22, asking restaurants to stop serving alcohol and close early.

But the surge in infections could add pressure on Suga, already under criticism for his pandemic response ahead of a general election this year, to step up countermeasures.

Vaccinations in Japan are gradually picking up -- about 26 percent of the population has received two shots -- but still lag behind other wealthy countries such as the United States and Britain as supply concerns have forced some local governments to pump the brakes.

"We're concerned about the rise in people in serious condition," she told reporters.

The figure going back to July 1 excludes infections announced by central and local governments.

International Olympic Committee spokesman Mark Adams stressed that adequate steps are being taken to prevent outbreaks in the athletes' village, saying organizers have administered nearly a quarter of a million coronavirus tests with a positive rate of 0.02 percent.