South Korean President Moon Jae In will not visit Japan for the opening ceremony of the Tokyo Olympics on Friday as summit talks with Japanese Prime Minister Yoshihide Suga that Seoul made conditional on Moon's Japan visit were unlikely to yield satisfactory results, the presidential office said Monday.

Moon's decision not to visit Japan came as ties between the two Asian neighbors remain frozen mainly over issues stemming from Japan's 1910-1945 colonial rule of the Korean Peninsula. 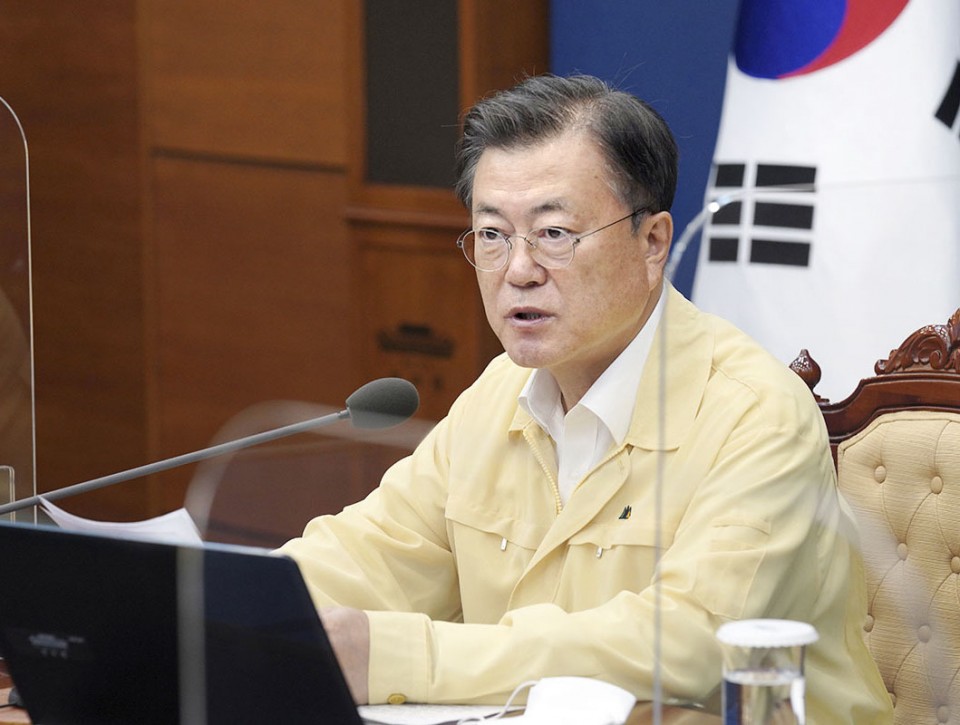 South Korean President Moon Jae In attends a meeting at his office in Seoul on July 19, 2021. (Photo courtesy of South Korea's presidential office)(Kyodo)

The presidential office said that even though South Korea and Japan have discussed ways to achieve future-oriented cooperation and make progress on historical issues, reaching a significant level of mutual understanding, it was determined that the possible summit of Moon and Suga would bring an insufficient outcome at this stage.

It also suggested that a senior Japanese diplomat's recent inappropriate remark about a presidential visit to Japan had soured the prospects for its realization.

As South Korea's representative, Culture, Sports and Tourism Minister Hwang Hee will head to Tokyo to participate in the opening ceremony of Tokyo Games, the presidential office added.

Japan and South Korea have not held summit talks since December 2019, when Suga's predecessor Shinzo Abe met with Moon in China. Suga and Moon merely exchanged greetings at a Group of Seven summit event in Britain in June.

Relations between the two Asian neighbors have sunk to the lowest level in decades following South Korean court rulings ordering Japanese compensation to Koreans forced to work against their will during World War II and to former "comfort women" over their treatment in Japanese military brothels.

Japan maintains all issues concerning claims related to its colonial rule have been settled under a bilateral agreement signed alongside a 1965 treaty that established diplomatic relations between the two countries.

The already frayed ties between the two countries were jolted by fresh uncertainty late last week when local media reported that Hirohisa Soma, deputy chief of mission at the Japanese Embassy in Seoul, had made an inappropriate remark about Moon, prompting the South Korean Foreign Ministry to lodge a protest.

Soma reportedly told a South Korean reporter that Moon is in a tug-of-war only with himself over frayed ties between Japan and South Korea, using a sexually explicit expression.

The Japanese government is planning to remove Soma, a government source said Monday.