Long seen as a leading light in Japanese swimming, Yui Ohashi's path to becoming a double Olympic gold medalist Wednesday was not without adversity, confidence issues jeopardizing her career on numerous occasions.

"I don't have the confidence. It might have been better not to have won a medal," she told Japan head coach Norimasa Hirai in 2018 soon after finishing second in the 200-meter individual medley at the Asian Games in 2018. 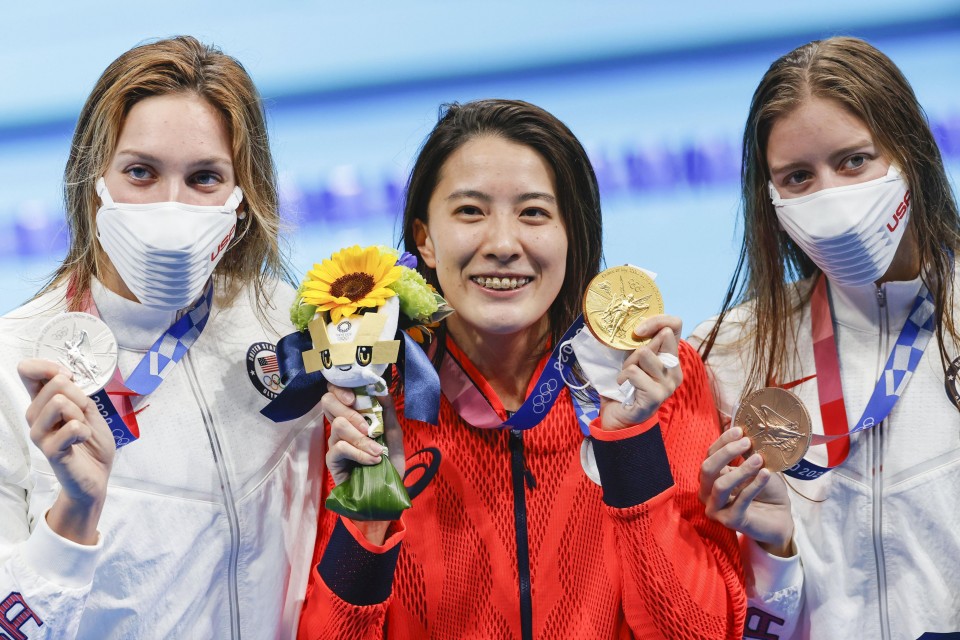 Japan's Yui Ohashi (C) poses with her gold medal in the women's 200-meter individual medley of the Tokyo Olympics on July 28, 2021, at Tokyo Aquatics Centre, alongside silver medalist Alex Walsh (L) and bronze medalist Kate Douglass, both of the United States. (Kyodo) ==Kyodo

Having come second on her world championships debut in 2017, she was in her second year in the national team when she was named women's captain, a role the Shiga-native was perhaps not initially built for.

"The gold medal is my only aim" was the declaration she regularly made at send-off ceremonies ahead of big competitions. However her internal dialogue, she said, was one of just trying to say "the right thing" at the right time.

Difficult moments continued as she came sixth at the 2019 worlds before her eventual disqualification -- for an apparent rule breach during a turn -- leaving her in tears.

Yet, gradually, her technical development was progressing under the famous head coach Hirai, mentor to former breaststroke champion Kosuke Kitajima and many others.

A late developer who also had to fight off injuries and a blood condition called anemia, Ohashi's weakness in her wall touches and turns as well as how she entered her strokes upon hitting the surface eventually were a thing of the past due to her immersion in a high-performance atmosphere.

Her innate ability to absorb and replicate others' techniques aided her rise too.

As a girl, she was regularly seen glued to the television watching over and over international swimming meets videotaped by her father, the seed of her later dedication planted at a young age.

She combines this obsession with the sport with an aptitude to pick things up incredibly quickly. There are stories of her being able to quickly internalize and replicate complicated idol group dance moves, something she wowed her teammates with on various occasions.

With all the physical tools, the only piece of the jigsaw left was getting her mental game right, and the crucial turning point arrived with a one-on-one conversation she had in a cafe with Natsumi Hoshi, the London and Rio de Janeiro bronze medalist in the 200 butterfly, in January 2020.

Hoshi won gold at the 2015 worlds having kept her cards next to her vest.

"There are those who publicly state they are aiming for gold, and those who don't. Isn't it okay just to pick the one that suits?" she asked Ohashi.

Ever since, Ohashi's approach has changed, she now pushes to find her limit, not targeting a particular time or result.

Also helped by the strong bond fostered with Japan's other senior swimmers, including Miho Teramura who asked Ohashi to win for her in the final after she went out in the semifinals on Tuesday, the swimmer has established a winning balance.

"I want to display the things I've built," she said heading into her home Olympics.

In becoming the first Japanese woman to win two Olympic gold in the same Summer Games, in individual medley events that require true all-around ability, she has done so in the best way possible.