Japan's Kei Nishikori reached the quarterfinals of the men's singles tennis tournament at the Tokyo Olympics on Wednesday, beating Ilya Ivashka of Belarus in straight sets.

On another day of punishing heat in the Japanese capital, Nishikori beat Ivashka 7-6(7), 6-0 in two hours at Ariake Tennis Park, booking his spot in the Olympic singles quarterfinals for the third straight games. 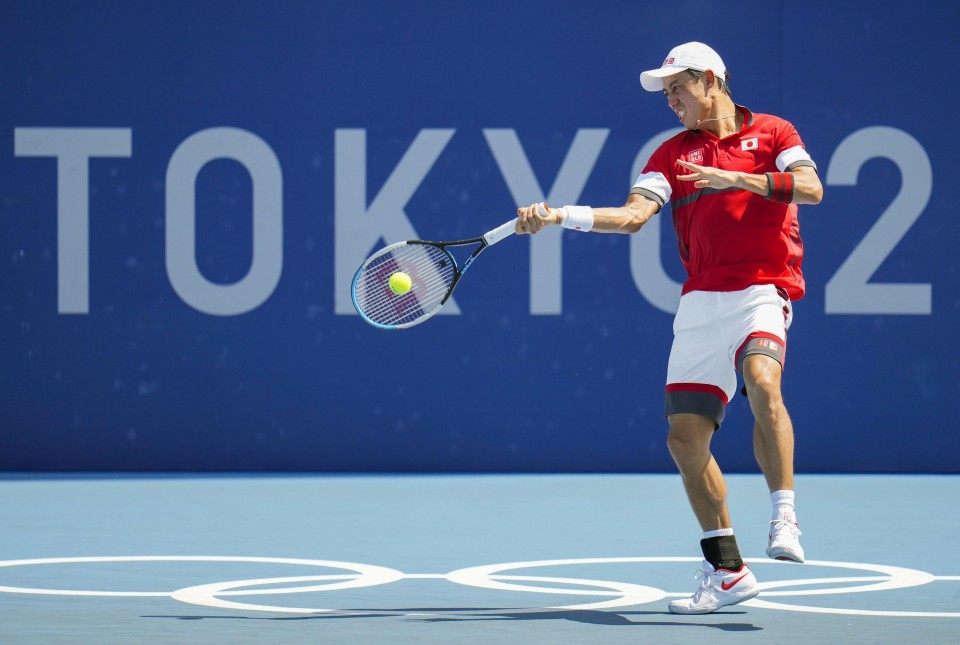 Kei Nishikori of Japan plays against Ilya Ivashka of Belarus in the Tokyo Olympic men's singles third round at Ariake Tennis Park in the capital on July 28, 2021. (Kyodo) ==Kyodo

In his first meeting with Ivashka, Nishikori was visibly fatigued from the beginning and had trouble keeping up with his opponent's speed.

But the Japanese picked up the steam later in the first set, converting three break points and coming from behind from 5-2 to take the tie break.

The second set went in Nishikori's favor. He won long rallies and took advantages of Ivashka's errors amid temperatures hitting about 30 C.

Playing in his fifth match, including doubles, Nishikori made 27 unforced errors to his opponent's 44 at the venue, where general spectators are not allowed as part of countermeasures against the novel coronavirus.

"I was just focused on each and every point as it came," said Nishikori. "My opponent played some fierce shots in very windy conditions. I was thinking it wouldn't be a surprise if I lost but I managed to come to grips with it."

"There is still a way to go and I will take confidence from this victory into my upcoming games."

Nishikori and partner Ben McLachlan were eliminated in the doubles tournament later in the day after a 6-3, 6-3 defeat to Croatian top seeds Nikola Mektic and Mate Pavic in the quarterfinals.

Nishikori, ranked 69th in the world, is the last Japanese singles player remaining at these Olympics after Naomi Osaka was knocked out of the women's tournament by Czech Marketa Vondrousova on Tuesday.

At the 2016 Rio de Janeiro Olympics, Nishikori defeated Rafael Nadal in the bronze medal match. He made a quarterfinal exit at the 2012 Games in London.