The U.S. State Department on Thursday maintained its assessment of Japan's efforts toward the elimination of human trafficking at Tier 2 on its four-level scale, acknowledging some progress but also citing ongoing abuse of foreign workers. 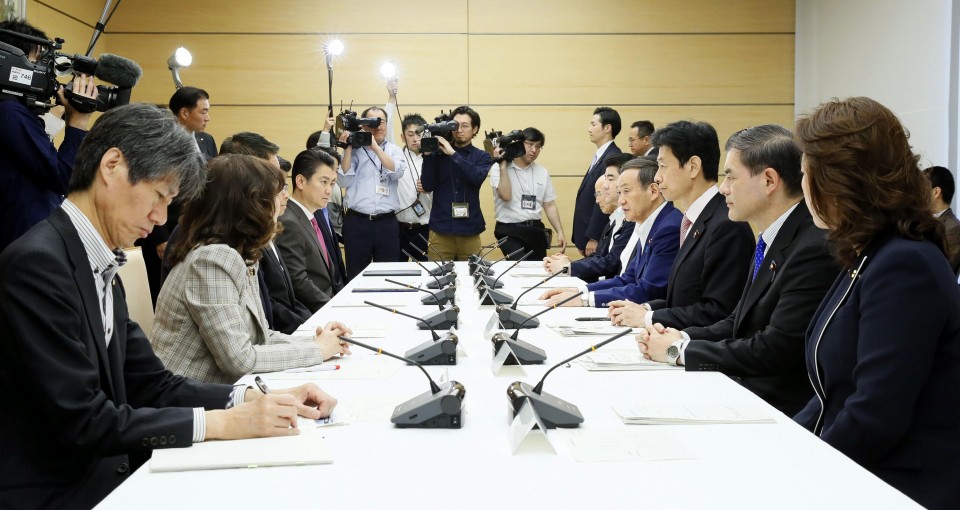 A government meeting is held May 24, 2019, to discuss measures to tackle human trafficking in Japan. (Kyodo)

According to the annual Trafficking in Persons Report, Japan was rated at Tier 2 for the second consecutive year after earning the highest classification of Tier 1 in 2018 and 2019.

The Japanese government "does not fully meet the minimum standards for the elimination of trafficking but is making significant efforts to do so," the department said, referring to the investigation, prosecution and conviction of some traffickers and the implementation of public awareness campaigns.

But Japanese authorities have to investigate and prosecute sex and labor trafficking cases more vigorously, and hold convicted traffickers accountable by imposing "strong" sentences, it said.

"Despite persistent reports of forced labor among labor migrants working in Japan under its auspices, authorities again did not proactively identify a single trafficking case or victim" in the program, said the report covering a 12-month period through the end of March this year.

The top government spokesman in Tokyo declined to comment specifically on the department's assessment but said Japan takes alleged cases of human trafficking seriously and is making a concerted effort to stamp out forced labor.

"Human trafficking is a grave violation of human rights and we will work with the relevant ministries to implement thorough countermeasures," Chief Cabinet Secretary Katsunobu Kato told a press conference Friday.

Many of the Tier-3 countries, including China and North Korea, continued to be recognized as having a "policy or pattern" of the government itself engaging in trafficking.

Highlighting forced labor against the Uyghur minority and other Muslims in China's western Xinjiang region, the State Department said in the report that the "government is the trafficker" and is carrying out mass arbitrary detention of the region's people.

Authorities use "threats of physical violence, forcible drug intake, physical and sexual abuse, and torture to force detainees to work in adjacent or off-site factories or worksites" producing garments, footwear, materials for solar power equipment and other various goods, the report said.

Noting that such products are "injected into international supply chains" and spreading China's "forced labor complicity around the globe," it suggested that governments, companies and consumers can all play a role in demanding an end to the use of forced labor in Xinjiang.