Joint leaders Hakuho and Terunofuji comfortably took care of rank-and-file opponents Sunday at the Nagoya Grand Sumo Tournament to improve to a perfect 8-0.

Grand champion Hakuho secured a winning record in his return from knee surgery by forcing out No. 4 maegashira Kotoeko, while promotion-seeking ozeki Terunofuji earned his crucial eighth win after downing No. 3 Tobizaru. 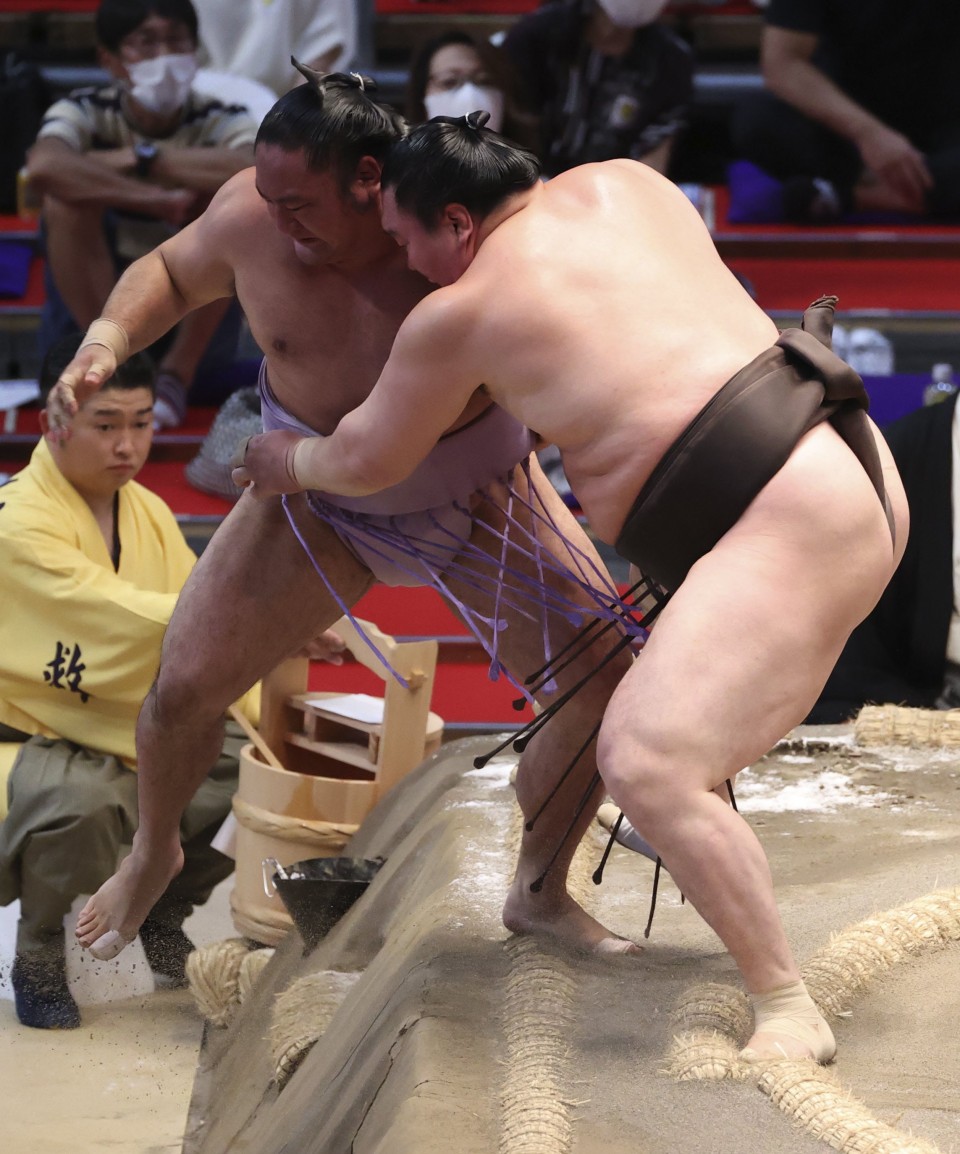 Having missed all or part of the past six meets, Hakuho continued his comeback in commanding style, quickly ushering Kotoeko (2-6) from the ring in the last bout of Day 8 at Dolphins Arena.

Opening with his trademark face slap, the winner of a record 44 Emperor's Cup bulldozed his maegashira opponent one way before slinging him around and shoving him out the other side.

Terunofuji, who is gunning for yokozuna promotion along with his third straight championship, withstood an aggressive opening foray from Tobizaru (3-5) en route to a convincing win.

Looking to keep Terunofuji off his belt, Tobizaru tried pushing and thrusting at arm's length, but the powerfully built Mongolian ozeki fended off the attacks and slapped the maegashira to the clay.

If Terunofuji wins the 15-day meet, he will earn promotion to sumo's highest rank, continuing one of the most remarkable comeback stories in the history of the sport.

The 29-year-old had plummeted as low as the fifth-tier jonidan division in March 2019 following a succession of health woes, including major surgery on both knees.

Takayasu, who missed the first two days with a sore back, improved to 4-2-2 after winning a battle of attrition against fellow sekiwake Mitakeumi.

With the pair coming to a stalemate near the middle, Mitakeumi (5-3) tried to keep Takayasu off balance with a forearm grip, but the former ozeki patiently waited to break free and maneuver his way to a force-out win.

New komusubi Wakatakakage dropped to 3-5 after being thrust down by the 200-kilogram Ichinojo (5-3).

Giving up more than 70 kg to his opponent, Wakatakakage tried to slip to the side at the opening clash but lost his footing, allowing Ichinojo to easily shove him to the ground.

The other new komusubi, Meisei, advanced to 4-4 following a furious exchange of blows with No. 1 Daieisho (1-7), who moved to the brink of a losing record for the tournament.