Many overseas journalists covering the Tokyo Olympics feel they have no choice but to accept strict COVID-19 restrictions, acknowledging the challenges of conducting such a massive international event under extraordinary circumstances.

The health crisis has changed nearly every aspect of the Olympics for the roughly 4,600 media members from 2,000 outlets visiting Japan. 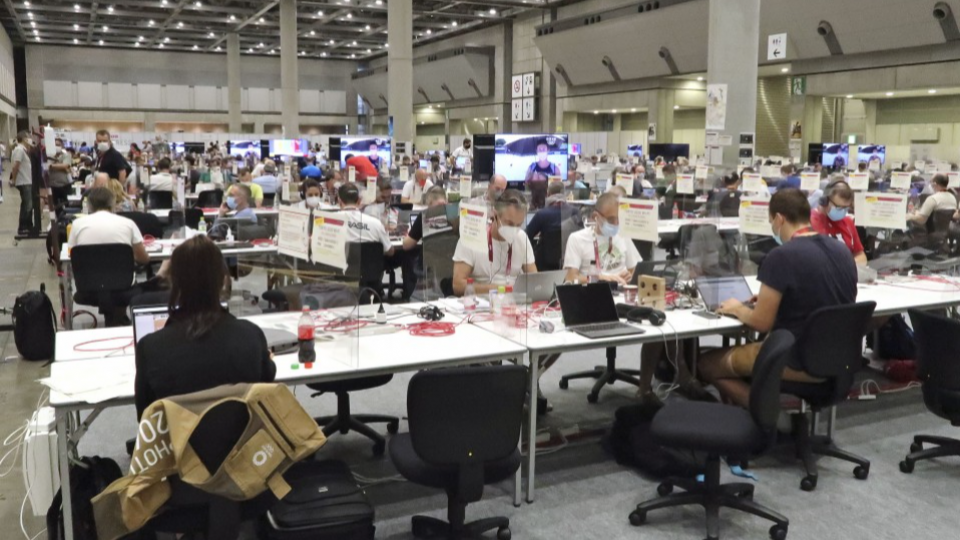 Photo taken July 23, 2021, shows members of the foreign media working in the main press center of the Tokyo Olympics. (Kyodo)

Unprecedented safety measures after arrival include coronavirus tests, restrictions on movement and caps on the number of reporters inside venues, often leading to significant delays.

"You understand why (the safety protocols) are in place, and I think all of us want to do our best to follow them, but it is stressful. I find myself writing a lot of notes to myself every day," said Rachel Blount, a reporter from the Minneapolis Star Tribune covering her 12th Olympics.

Blount, whose first overseas Olympic assignment was the 1998 Nagano Winter Games, said she had been hoping to visit Japan again and explore its bustling capital for the first time.

"I've never spent any time in Tokyo and I was so looking forward to visiting some restaurants and just walking around, and experiencing the culture. And taking public transportation would have been much easier," she said.

She did not have to go through the normally required quarantine period for ordinary travelers after gaining approval for a pre-submitted plan to undertake games-related activities upon arrival.

All visiting journalists for the Olympics are required to submit their activity plans for the first 14 days in Japan and they can visit places only approved by Japanese authorities during that period.

"It was, again, challenging and stressful, that you had to get two tests, the 96-hour test and the 72-hour test (before heading to Japan)," said Blount, whose interaction with Japanese locals so far has been with airport and Olympic staff.

"People could answer your questions and they were patient with you, and there was something about the way Japan handled that stuff at the airport that made you think, 'it's going to be alright. I'm going to get in the country and it's going to be OK,'" she said.

Peter De Voecht, a photographer from Belgium covering his fourth summer Olympics, said "So far, so good," although knowing COVID-19 rules proved a tough task for him too.

"I understand the Japanese are worried that there came so many people to this event," he said. "(But) on a certain moment, there were too many rules."

De Voecht said having to submit a large number of forms, filing activity plans and trying to keep abreast of constant correspondence had been "very, very difficult."

"But it all came good...Before coming here, there was a lot of worrying if everything was going to be fine, because we didn't know," he said.

A freelance journalist from the Netherlands, who preferred not to be identified, said he felt the safety protocols were in line with what he had expected, and were somewhat more relaxed than measures in his home country.

"I think the testing and quarantine system was good, two weeks quarantine is pretty normal for any country and it wasn't too hard," he said. "The media bus was all right too, running every 20 minutes between the hotel and the main press center."

"I actually think life is more normal here than in the Netherlands. Until May, it was all very strict and most things were closed in Amsterdam. Not even a curfew, for the entire day."

Tapio Keskitalo of the Finnish news agency STT agreed that "everything has been quite as I expected," adding "it was quite a long time in the airport, but I knew that it was going to take a long time" and there was "nothing so much to complain about."

A Chinese photographer, meanwhile, carrying a pair of goggles and a face shield in addition to wearing a mask, said, "I don't feel safe" covering the Tokyo Olympics, noting that buses used to transport reporters are packed and people cannot observe physical distancing.

A British freelance journalist, writing for national newspapers and covering his third Olympics, believes people watching the games from across the world appreciate the efforts being taken by Japan.

"I think everybody feels so sorry for Japan, I was thinking what if London had all these problems in 2012," he said. "I think there's lots of good feeling toward Japan because they've tried so hard and they've had more problems than anyone could have ever imagined."

The decision not to allow domestic spectators did puzzle him, however, in light of professional baseball, soccer and sumo competitions being staged in front of fans.

"When you banned overseas fans, I thought fine, and maybe have 80 or 50 percent of the fans, particularly in big outdoor venues," he said. "Of course you can't take any chances...but watching thousands of people lining the route for a cycling road race, maybe there's a mixture of views."