Bach, who is already in Tokyo for the Olympics beginning in just over a week, is set to visit the Peace Memorial Park, dedicated to the victims of the 1945 U.S. atomic bombing, and lay flowers at the cenotaph there. His trip coincides with the starting day of an Olympic truce adopted by the United Nations. 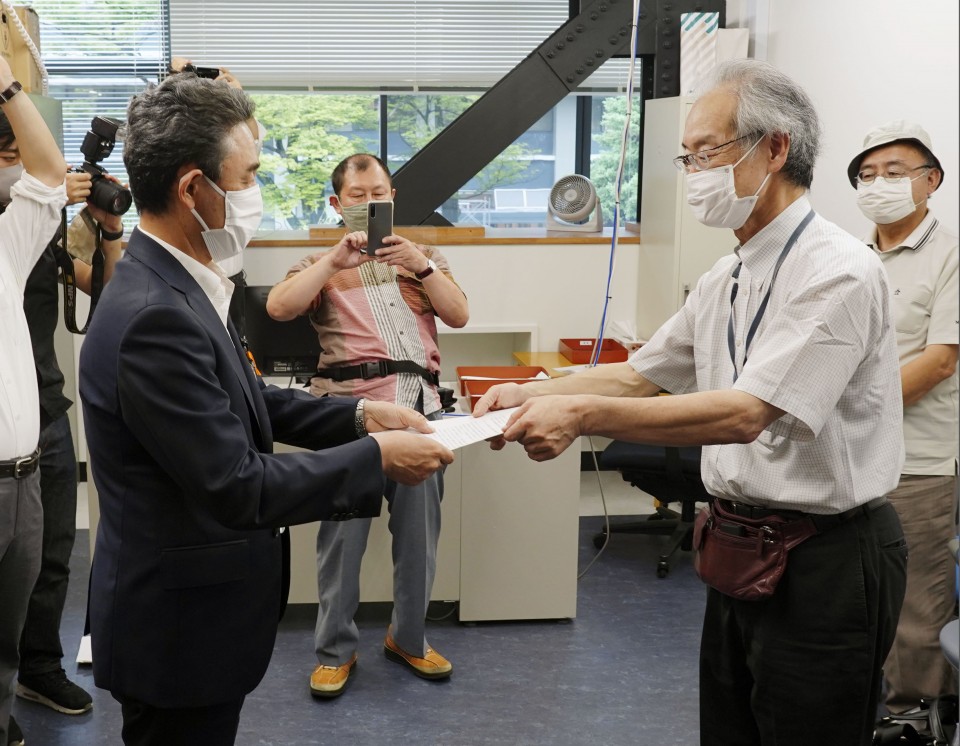 Shuichi Adachi (R), a lawyer who heads a civic group, hands in a complaint to a Hiroshima prefectural government official on July 12, 2021, to ask for the cancelation of International Olympic Committee President Thomas Bach's visit to Hiroshima. (Kyodo)

He is also scheduled to take a tour of the Hiroshima Peace Memorial Museum located in the park, according to the city government.

"We will reaffirm our commitment to peace in the city of peace, Hiroshima," Bach said in an interview with Kyodo News.

The announcement came at a time when the IOC and Japanese organizers are going ahead with staging the Tokyo Olympics and Paralympics despite public concern about the coronavirus pandemic.

The IOC chief was initially expected to participate in a torch relay event in Hiroshima in May, but it was scrapped due to a resurgence of coronavirus infections in Japan.

Seiko Hashimoto, the games' organizing committee president, will be accompanying Bach on his visit to Hiroshima.

Hiroshima Gov. Hidehiko Yuzaki said in a statement, "I would like (Bach) to send a powerful message toward the realization of a peaceful world without nuclear weapons."

But a civic group filed a complaint on Monday with the Hiroshima city and prefectural governments to call off the visit by Bach, arguing the trip is politically motivated, taking advantage of the city promoting world peace and thus "dishonoring" survivors of the bombing.

The group also raised concerns about Bach traveling to Hiroshima from Tokyo when the capital is under a fresh state of emergency due to a spike in infections.

An online petition launched last week by another civic group calling for the cancellation of Bach's visit to Hiroshima had received over 40,000 signatures as of Tuesday night.

On Friday, IOC Vice President John Coates will visit Nagasaki, the other Japanese city devastated by a U.S. atomic bombing in 1945 in the closing days of World War II, Nagasaki Gov. Hodo Nakamura announced Tuesday at a local assembly meeting.

Coates is expected to visit the Nagasaki Atomic Bomb Museum, according to local officials.