Defending softball champion Japan will begin its quest for the most unusual of back-to-back titles on July 21, when the sport returns to the Olympics after a 13-year hiatus and in the middle of a pandemic that forced the Tokyo Games to be postponed for one year.

For Japan manager Taeko Utsugi, this has meant adjusting to an unknown situation and being aware of widespread public disapproval of the games being held during a public health crisis.

"These will be different from the Olympics we've had up until now," Utsugi said in June. 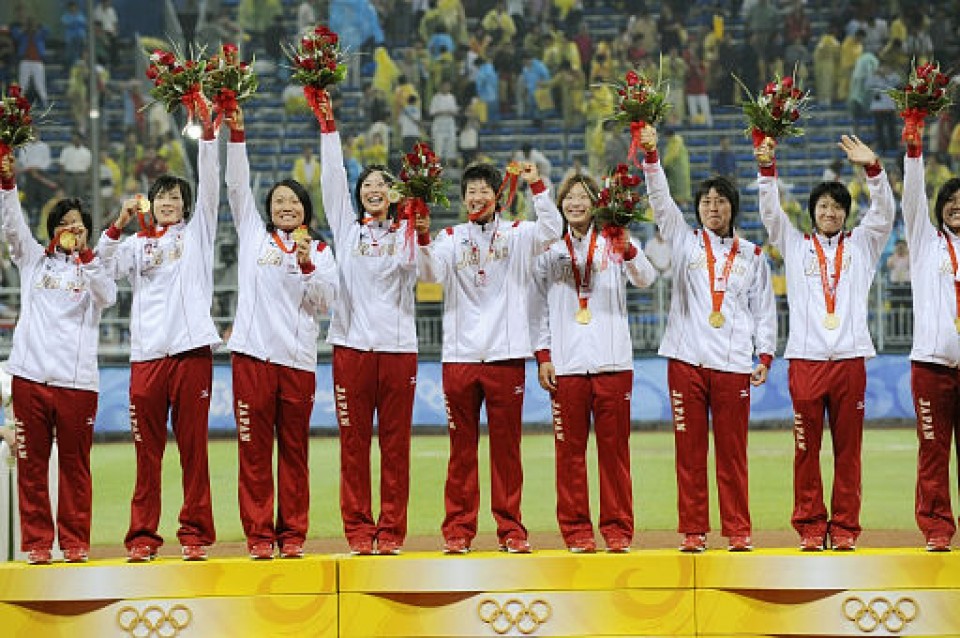 Japanese softball players acknowledge fans during the medal ceremony for the gold they captured in the Beijing Olympic Games in August 2008. (Kyodo)

"There are so many different sides to this. I didn't have any role in the Olympic decisions, so I don't know how I should feel about it. As far as we're concerned, we have to focus on those things we need to do and are able to control."

"Everyone is wondering how to approach these games. This won't become the new style, but I think things are definitely going to change going forward."

One thing that hasn't changed for Japan's national team is the veteran presence of outfielder and captain Eri Yamada and ace pitcher Yukiko Ueno. Both won gold medals in Beijing in 2008, but have had to wait 13 years for an encore after the International Olympic Committee dropped softball and baseball from its core program from 2012.

But after Tokyo was picked to host the games, the IOC agreed to let host organizers nominate additional sports. Japan used the opportunity to put softball back, if temporarily, although at a games with an obstacle-filled path to the starting line. 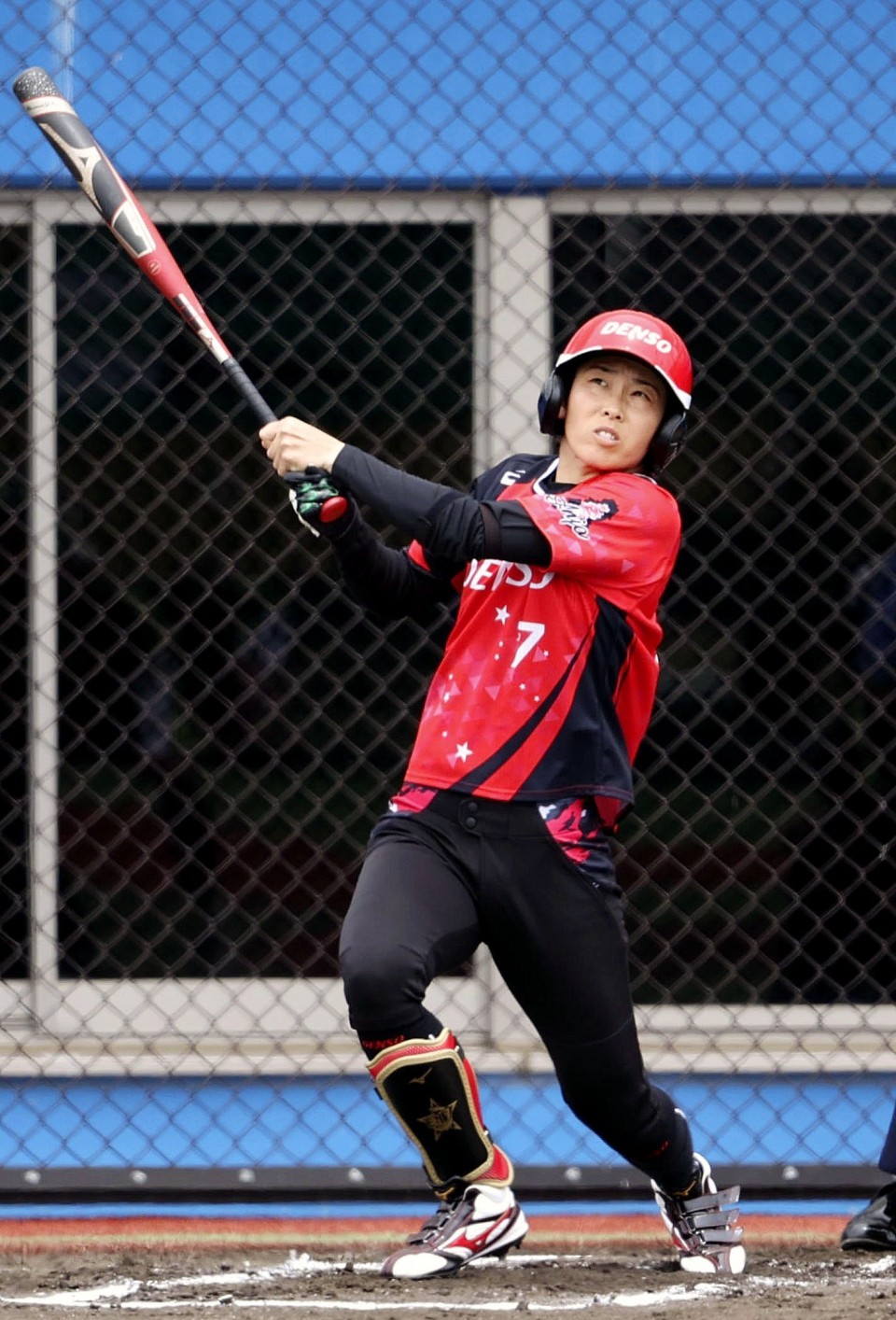 Eri Yamada, captain of Japan's national softball team, is pictured in May 2021. (Kyodo)

For the 37-year-old Yamada, the combination of Olympic softball's revival and the one-year postponement, announced in March 2020, provided the motivation and space she needed to think and revitalize her career.

In addition to delaying the Olympics, the coronavirus pandemic wiped out the first half of the Japan Softball League's 2020 season. Yamada's batting results fell off in 2019, and when they failed to recover in 2020, she began looking for ways to change. After 19 years with Hitachi's club, she decided to leave and play the 2021 season with Denso.

"I came to (Denso) to rekindle my desire," Yamada said. "I've done this while coming to grips with what is necessary for me to get results."

"If it weren't for the postponement, I suppose I would have continued on that downward path."

The Olympics offered Yamada a chance for a second straight gold medal, but she said another motivating factor was a desire to have people see the game for all it can be.

"I realized I loved softball and that through the Olympics I wanted to give back to the game in different ways," she said. "I want people to be glad they watched the softball, and to play in a way that will inspire them to try hard from tomorrow."

Ueno, who will turn 39 the day after Japan opens the Olympic softball tournament against Australia in Fukushima on July 21, is coming back from an injury she suffered this spring. 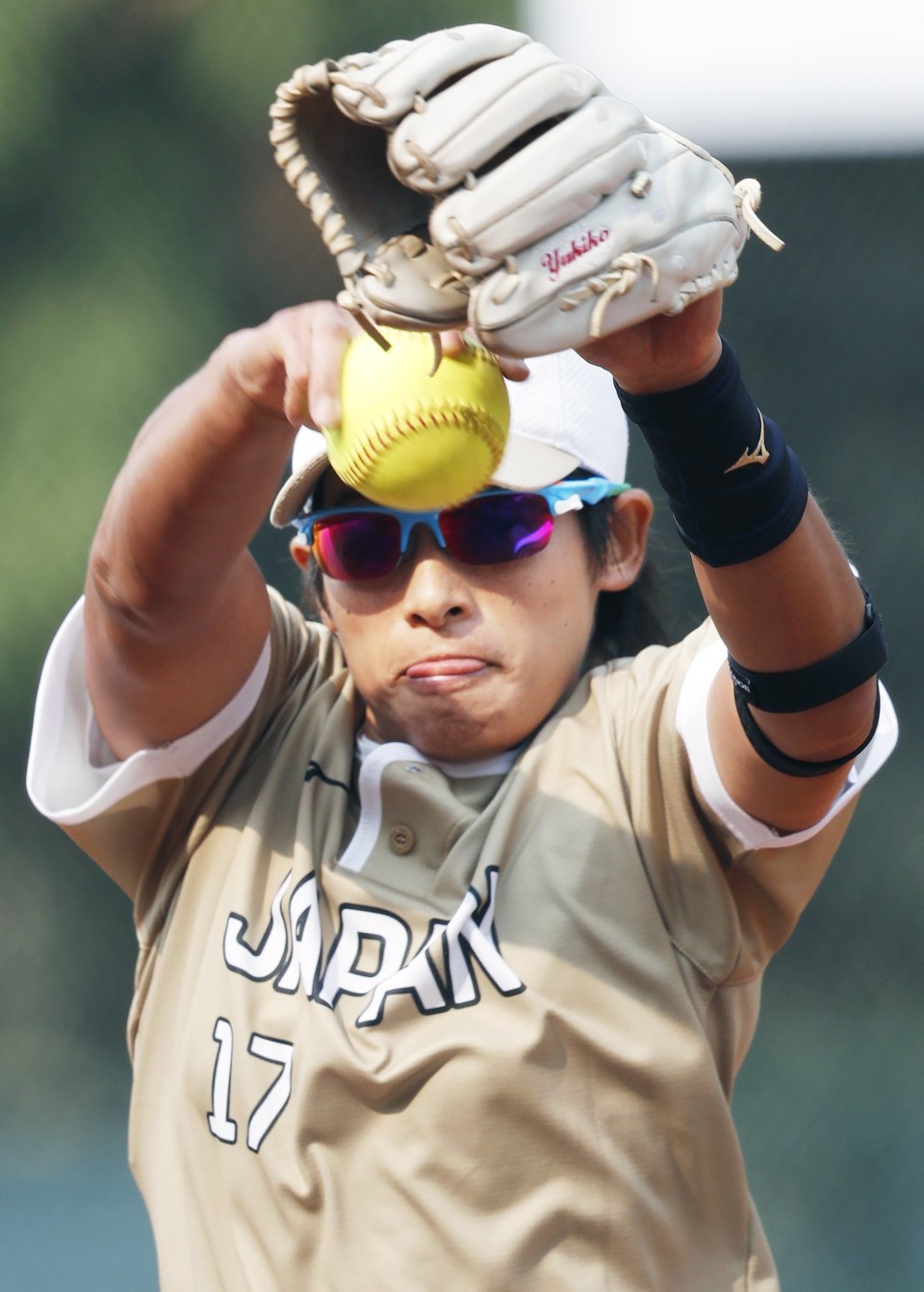 Photo shows Yukiko Ueno of Japan pitching during a softball match against Taiwan at the Asian Games in Jakarta on Aug. 24, 2018. (Kyodo) ==Kyodo

The pitcher missed a month of league play this year due to an oblique muscle injury she said was caused by poor mechanics, but added that she is wiser for having gone through it.

"My balance was off when I pitched, that led to injury," she said in May after she returned to duty with Bic Camera's Japan Softball League club. "The more you experience, the more you have to draw upon."

But if Japan is to deliver a gold medal encore performance and once more upstage the United States on the biggest stage, it will require big contributions across the board, and much of that focus may fall on the pitching arm and batting of Yamato Fujita.

Given the attention two-way baseball star Shohei Ohtani has garnered in the major leagues, Japan's 30-year-old two-way softball star is bound to be in the Olympic spotlight. This year, Fujita joined Ueno at Bic Camera, and Utsugi sees the pair as being the 1-2 punch from the pitcher's circle.

"I get to the ground for practice and she's there, every day," Fujita said of Ueno. "She's a huge presence, but I am not resigned to being second best."

This is exactly the attitude that Yamada, as team captain, wants from her colleagues.

"I will shoulder the load that needs to be carried, and I want the young players to push themselves to greater heights," she said.

FEATURE: Huston set on using Olympics to take skateboarding to next level