Judoka Naohisa Takato's family and supporters were ecstatic at his gold medal at the Tokyo Olympics on Saturday, made all the sweeter by being Japan's first of the games on home ground.

Watching on TV at Takato's parents' home in Shimotsuke, Tochigi Prefecture, they oohed and aahed as he advanced through the tournament, a day after the opening of the Olympics. 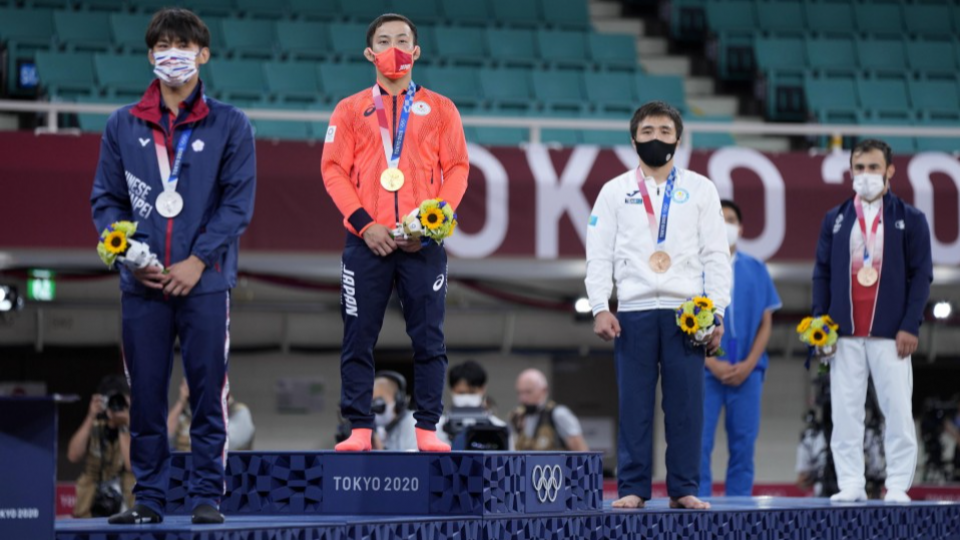 Naohisa Takato (2nd from L) of Japan celebrates on the podium after winning the men's judo 60-kilogram event of the Tokyo Olympics at Nippon Budokan in Tokyo on July 24, 2021, along with silver medalist Yang Yung-wei (L) of Taiwan and bronze medalists Yeldos Smetov of Kazakhstan (2nd from R) and Luka Mkheidze of France. (Kyodo) ==Kyodo

Cheers erupted and everyone leapt from their seats as Takato was crowned champion of the under 60-kilogram division after his opponent was disqualified for committing his third foul.

"I'm at a loss for words," said Takato's father Norihiro, who collapsed in tears. "It was amazing. I want to praise him."

Takato's road to the gold medal has not been easy, with the 28-year-old falling short of expectations by settling for bronze at Rio de Janeiro in 2016.

"I think he finally found his own judo. From now on, I'd like him to pursue greatness as a person," the 64-year-old said.

Takato's family had originally hoped to cheer him on in person at Nippon Budokan, but those plans were dashed after organizers of the Tokyo Olympics decided not to allow spectators at most venues due to COVID-19 concerns.

"There were arguments for and against holding the games, but I'm proud he was able to get results," said his mother Etsuko, 54.

Childhood coach Kenzo Fukuda, 71, said they spoke by phone shortly after Takato won the final, with his former student promising to bring the gold medal around for everyone to see.

"Not only is he well-suited to be a judoka, he also has a great personality," Fukuda said. "He kept working hard after getting bronze and grew into a man befitting the gold."