In a policy proposal, the National Governors' Association also called for thorough antivirus measures during the Tokyo Olympics set to open July 23, including restricting activities of foreign athletes. 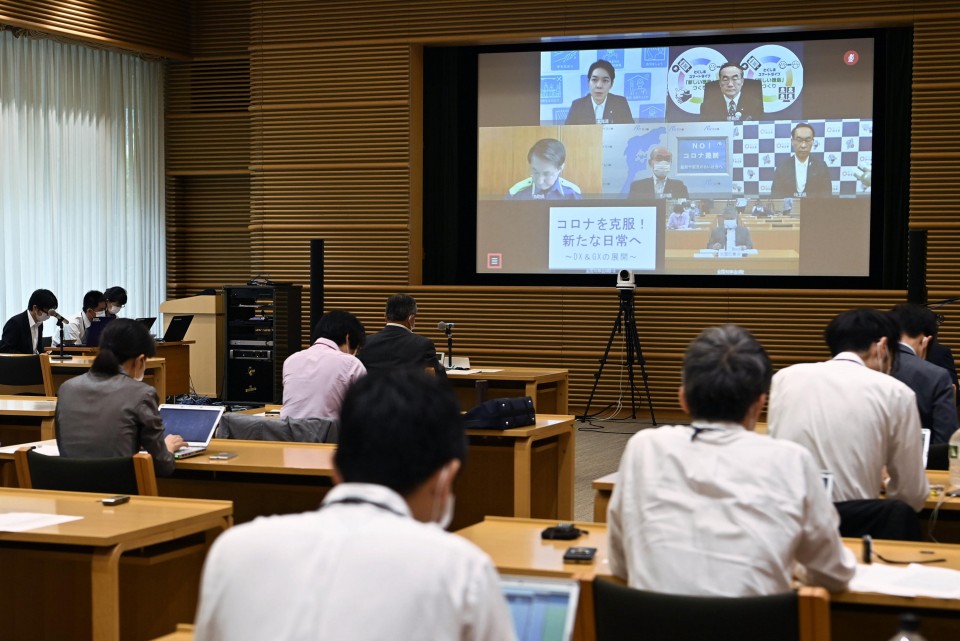 Photo taken July 11, 2021, in Tokyo shows an online conference by governors across Japan on measures against the novel coronavirus. The governors decided to urge the central government to step up calls for Olympic athletes to take anti-virus measures and for citizens to refrain from traveling in the summer in a bid to prevent the spread of the Delta variant. (Kyodo) ==Kyodo

The governors released the proposal amid rising confusion at the frontline of inoculation due to supply shortages faced by many municipalities.

The governors said local governments were forced to suspend accepting appointments for the COVID-19 vaccination, as well as canceling appointments, after the state pressured local authorities to accelerate the pace of providing shots.

The proposal urged Prime Minister Yoshihide Suga's government to recognize that its handling of the situation has caused confusion, even though local authorities have been trying to meet the government's goal of finishing inoculating all people in the country who want to receive shots by October or November.

The central government must distribute COVID-19 vaccine supplies necessary for municipalities and unveil delivery schedules for the future, it said.

"We have no choice but to limit the acceptance of appointments because supply is not meeting demand," said Ishikawa Gov. Masanori Tanimoto, one of 41 heads of the country's 47 prefectures who took part in an online meeting.

Some governors criticized the government's handling of workplace vaccinations as well.

The proposal also contains a request to implement a major economic stimulus package as local economies have been hard hit by the prolonged pandemic.

The governors urged the government to swiftly formulate a supplementary budget and carry out "bold economic measures" to support a wide variety of businesses.